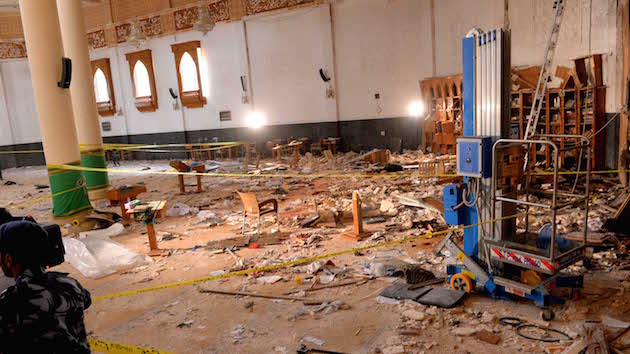 The inside of the Imam Sadiq Mosque in Kuwait City following a terrorist bombing.Noufal Ibrahim/Xinhua/ZUMA Wire

Dozens of people were killed on Friday in Tunisia, France, and Kuwait in what authorities in all three countries are calling terrorist attacks. Here’s what we know so far.

The deadliest attack happened at a resort in Sousse, a Tunisian beach town popular with European tourists. Tunisian officials said 27 people were killed on the beach near the Imperial Marhaba hotel, some of them foreigners.

“One attacker opened fire with a Kalashnikov on tourists and Tunisians on the beach of the hotel,” a local worker told Reuters. “It was just one attacker. He was a young guy dressed in shorts like he was a tourist himself.”

John Yeoman, a tourist apparently staying at the Imperial Marhaba, tweeted descriptions of the attack and a photo of the barricade he constructed in his hotel room.

The shooting comes three months after another major terrorist attack at the Bardo Museum in Tunis, and it could devastate Tunisia’s vital tourist economy. “This could well be a dagger through the heart of Tunisian tourism, which would have very dark implications,” Daveed Gartenstein-Ross, a senior fellow at the Foundation for Defense of Democracies, told Mother Jones.

An apparent lone attacker drove a car through the gates of a factory in Saint-Quentin-Fallavier, a city near Lyon in southwestern France, killing one man and leaving his severed head on the front gate of the complex. Gartenstein-Ross said the decapitation suggested the attack may have been inspired by ISIS, whose execution videos have frequently shown the decapitation of Western hostages.

French authorities arrested the suspected attacker, whom French Interior Minister Bernard Cazeneuve said was possibly named Yassin Sahli (his name has been spelled differently in various media reports) and was previously known to French law enforcement. “This person was under investigation for radicalization but this investigation was not renewed in 2008,” the Guardian reported. “He had no police record.”

ISIS, the Sunni jihadist group that controls parts of Iraq and Syria, claimed responsibility for a bomb that exploded at a Shiite mosque in Kuwait City. Media reports have given conflicting numbers of victims, but the Kuwait Watch Organization, a human rights group, told the Associated Press that 16 people were killed. The bombing is the largest terrorist attack in Kuwaiti history; while Kuwait is a majority Shiite country ruled by a Sunni royal family, such large-scale sectarian violence is rare.

Just three days ago, an ISIS spokesman called for the group’s followers to ramp up attacks during the holy month of Ramadan. “Muslims everywhere, we congratulate you over the arrival of the holy month,” said Abu Muhammad al-Adnani in an audio statement released on Tuesday. “Be keen to conquer in this holy month and to become exposed to martyrdom.”