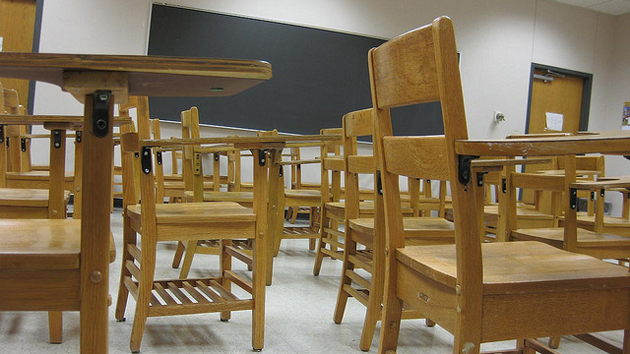 A US Department of Justice investigation has found that the state of Georgia is illegally segregating students with behavioral and emotional disabilities. The probe found not only that this sorting has resulted in an estimated 5,000 kids getting an inferior education—often in the same deteriorating buildings that were used during the Jim Crow days for black students—but that the segregated system limits the special education and behavioral resources available for students in integrated settings.

According to ProPublica, the DOJ sent Georgia Gov. Nathan Deal and Attorney General Sam Olens a letter this month detailing its findings:

In Georgia, schools were quick to move children out of mainstream classrooms, the Justice Department noted. In some cases, students were recommended for placement after a single incident or a string of minor incidents, such as using inappropriate language with a teacher. Parents reported feeling pressured into agreeing to the placements.

In fact, many students who were placed in what’s called the Georgia Network for Educational and Therapeutic Support, for GNETS, didn’t actually need to be there, the Justice Department said. Most could have stayed in their neighborhood schools if they’d been given more behavioral or mental-health support. “Nearly all students in the GNETS Program could receive services in more integrated settings, but do not have the opportunity to do,” the letter said.

The letter also explained how students began to feel like stigmatized “outcasts” after being placed in one of GNETS’ 24 facilities:

The negative effects of inappropriate segregation faced by students in the GNETS Program are readily apparent. One student in the GNETS Program stated, “school is like prison where I am in the weird class.” He attributes this in large part to isolation and distance from other students in the general education community, as he does not have the opportunity to interact with these students during the school day. According to a number of other students we spoke with, the GNETS Program denies them some of the most basic elements of a typical childhood school experience.

The arrangement set up by the state of Georgia, which is quick to label “problem” students, runs in direct contrast to the findings highlighted in Mother Jones’ recent feature What If Everything You Knew About Disciplining Kids Was Wrong? Reporter Katherine Reynolds Lewis focused on psychologist Ross Greene’s Collaborative Proactive Solutions method, which has teachers, parents, and administrators problem solve with students instead of jumping into punishment mode.

The CPS method hinges on training school (or prison or psych clinic) staff to nurture strong relationships—especially with the most disruptive kids—and to give kids a central role in solving their own problems. For instance, a teacher might see a challenging child dawdling on a worksheet and assume he’s being defiant, when in fact the kid is just hungry. A snack solves the problem. Before CPS, “we spent a lot of time trying to diagnose children by talking to each other,” Principal Nina D’Aran says. “Now we’re talking to the child and really believing the child when they say what the problems are.”

The next step is to identify each student’s challenges—transitioning from recess to class, keeping his hands to himself, sitting with the group—and tackle them one at a time. For example, a child might act out because he felt that too many people were “looking at him in the circle.” The solution? “He might come up with the idea of sitting in the back of the room and listening,” D’Aran says. The teachers and the student would come up with a plan to slowly get him more involved.

D’Aran’s school in Maine began implementing CPS in 2011. Prior, kids were referred to the principal’s office for discipline 146 times, and two were suspended. After CPS was introduced, the number of referrals dropped to 45, and there were zero suspensions.

It is important to note that the school where D’Aran works is predominantly white. A study released this month in the journal Sociology of Education found that black students who misbehave are more likely to be punished with expulsion, suspension, or referral to law enforcement, while their white peers who engage in the same actions are more likely to receive special education services or psychological treatment. This trend is apparent in the demographic breakdown within the GNETS program. Take, for example, the public school district in Madison County, Ga.: In 2011, the last time the Department of Education collected data, black students made up less than 10 percent of the district’s student body, but they comprised 48 percent of the student body at Rutland Psychoeducational Program, the GNETS facility within that district. Programs like CPS indicate shifts in school discipline are happening—it’s now about getting those practices into high-minority, disadvantaged districts, environments where the school-to-prison pipeline is a real threat.

“We know if we keep doing what isn’t working for those kids, we lose them,” Greene explained to Reynolds Lewis. “Eventually there’s this whole population of kids we refer to as overcorrected, overdirected, and overpunished. Anyone who works with kids who are behaviorally challenging knows these kids: They’ve habituated to punishment.”