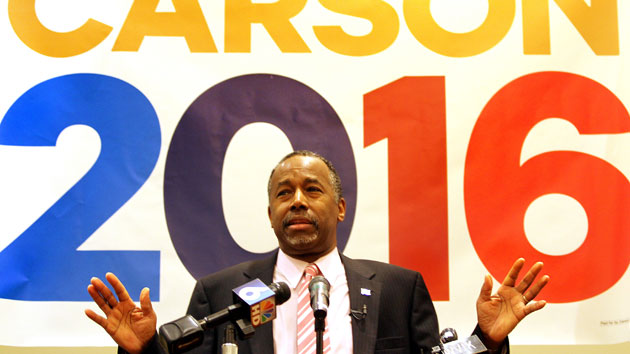 Republican presidential candidate Ben Carson’s latest fundraising report with the Federal Election Commission shows that his campaign brought in an impressive $8.5 million over the last three months—four times as much as Mike Huckabee, a politician with comparable appeal among Sean Hannity-watching conservative activists. Yet during that same period—a time in which Carson was sporadically campaigning while giving paid speeches, struggling to retain staff, and not running any television ads—Carson managed to spend a whopping $5.4 million. Much of that money went toward more fundraising, because his campaign depends heavily on third-party direct-mail firms. But, in stark contrast to Carson’s fiscal conservative message, his campaign spent big money on private jets, luxury hotels, and slickly produced events.

Carson’s campaign kickoff, for instance, came with a hefty price tag. While other candidates, such as Vermont Sen. Bernie Sanders, have taken advantage of cheap outdoor public spaces and free media, Carson dropped $25,448 to rent the Detroit Music Hall. The campaign also spent $64,521 on “musical entertainment” over the last quarter, much of it on the kickoff event. That included $20,000 paid to Alexi von Guggenberg, the producer of the song that plays in the background of this Carson campaign video, which has less than 30,000 views on YouTube; $15,500 to the Selected of God choir, which performed at his Detroit event; $10,271 to the contemporary classical vocal group Veritas, which also performed a few songs at his kickoff; and $18,750 to producer Kevin Cates.

The Carson team has also spent big money on luxury travel and accommodations, an area where campaigns often emphasize frugality. (Hillary Clinton staffers are commuting from DC to New York City exclusively by bus.*) His campaign spent $60,035 on private plane rentals from Addison, Texas-based Starbase Jets. And it spared little expense on lodging. Carson and/or his staff checked in at the Luxe Sunset Hotel in Bel Air at a cost of $827; the Algonquin in New York City ($814); the Rosewood Crescent in Dallas ($704); and the five-star Umstead Hotel and Spa in Cary, North Carolina ($405).

Carson, who led one national poll last month, promised to run an unconventional campaign. His first big FEC report backs him up on that.

*Update: According to Clinton’s own filings, her campaign did spend $8,700 on Amtrak tickets last quarter.