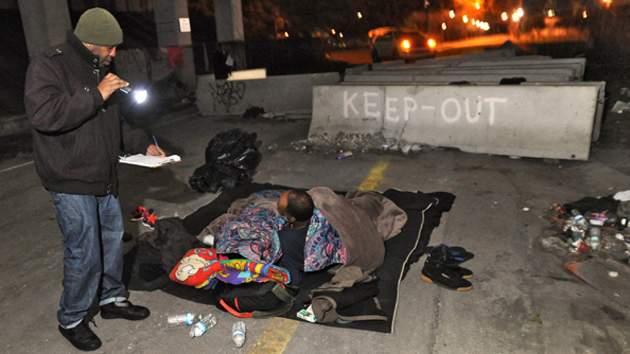 A new report shows that San Francisco is still struggling to house its homeless. According to the 2015 Point in Time Count—an in-person tally conducted in cities around the country every two years—the city’s homeless population has remained roughly constant over the past decade, even as the numbers of chronically homeless people continue to decline. This shift, homeless advocates say, points to a disturbing link between homelessness and the skyrocketing cost of housing in the city.

From 2013 to 2015, San Francisco’s homeless population increased by around 200 people to a total of 6,686. The number of chronically homeless has, however, decreased by 12 percent since 2013 and has fallen close to 60 percent in the past six years. (Chronically homeless refers to those who have spent more than a year on the streets, often with a disabling condition like mental illness or substance abuse.) Close to half of the homeless people surveyed by the city said they lost their housing because they could not afford rent; an additional 17 percent said they could not find housing.

“Housing instability is a trend we have been hearing a lot about nationwide, particularly in high-cost areas like San Francisco,” says Elina Bravve, a Senior Research Analyst at the National Low Income Housing Coalition (NLIHC), an advocacy and research organization. After the recession, she explains, more people began renting. Now higher-income renters are driving up demand and price. “That puts a lot of pressure on the low-income market,” she says. “It is definitely a problem that will continue over the next few decades.”

A person needs to make more than to $31 an hour to afford a one-bedroom apartment in the city.

According to a NLIHC report released earlier this year, a person needs to make more than to $31 an hour to afford a one-bedroom apartment in the city and around $40 an hour for a two-bedroom. At $12.21 an hour, the local minimum wage is higher than average but it doesn’t even come close. The problem isn’t limited to expensive cities. The same NLIHC report finds that the 2015 national “Housing Wage” for a two-bedroom apartment is $19.35—more than double the federal minimum wage and far out of reach for renters earning the average wage of $15.16.

The Obama administration has set a goal of eradicating chronic homelessness by 2017. But Bravve says fixes for the non-chronic homeless population are subject to the ebbs and flows of political will, especially when budgets are tight and most federal and local programs don’t target this population. In Los Angeles County, for example, rental prices have risen more four times faster than wages since 2000. The LA Times reported in January that city funding for affordable homes had fallen by $82 million between 2008 and 2014. In May, the county’s count found a 12 percent increase in its homeless population. It also found an 86 percent spike in numbers of tents, makeshift shelters, or people sleeping in vehicles, which it attributed in part to housing affordability.

Chronic homelessness is declining largely because of the effectiveness of “Housing First” programs that provide permanent housing to individuals who need the most (and most expensive) services. The strategy, which enabled Utah to house nearly all of its chronically homeless people can also provides a huge boon to local budget, saving around $43,000 a year per person.

However, this strategy isn’t designed to help low-income people who are not chronically homeless. Housing First’s savings start to dry up when it comes to housing people who don’t require the same level of services. This is one reason why analysts like Bravve emphasize the need for cities to invest in affordable housing. In San Francisco, she says, that doesn’t just mean increasing the supply of housing but “preserving what already exists and making sure that it doesn’t end up turning into condos.” The Housing Balance Report, released last week, showed that even though the city built thousands of new affordable housing units between 2004 and 2014, it only had a net gain of more than 1,100 new affordable units.

Just south of San Francisco, Santa Clara County has made housing affordability a priority—and it has paid off. Like San Francisco, the home of Silicon Valley has one of the most expensive rental markets in the nation. The wages necessary to rent a typical one-bedroom are close to three times as much as the local minimum wage. San Jose, like San Francisco, ranks among the top ten cities with the highest numbers of homeless people.

But this year, San Jose saw a 15 percent drop in its homeless population. “San Jose has been a leader in building affordable housing over the past 15 years,” says Ray Bramson, the homeless response manager for the San Jose Department of Housing. “We have 17,000 units in our portfolio and we have great low-income housing for working families and folks who need support in the community.” With more than 6,500 people still on the streets, he says the city remains committed to creating more affordable housing.

This year the county has issued 1,000 project-based vouchers that provide funds for contractors to produce affordable housing units, is working to convert more hotels and motels into low-income housing, and is looking into models like temporary tiny homes to house people coming off the streets, while more units are being built. It also invested $91.5 million in on housing and homeless services, and an earmarked an additional $6.7 million specifically for permanent supportive housing.

They still have a long way to go—more than 6,500 people are still without homes. But Bramson says the numbers show that the strategies are working. “I think if we can show that we can create affordability in a community like San Jose and areas of Silicon Valley,” he says, “we have great potential to house people anywhere in this country.”