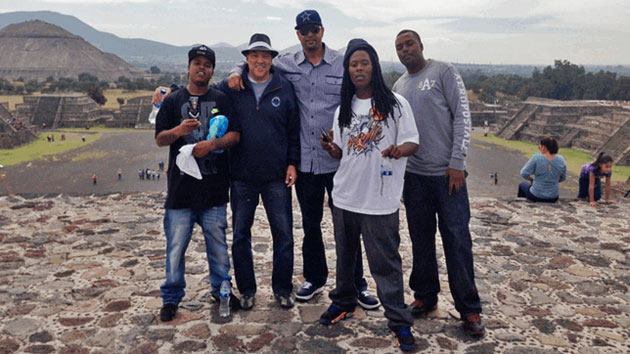 ONS staff and fellows on a visit to Mexico.Office of Neighborhood Safety

Last year I told you about a radical new approach to reducing gun violence in Richmond, California, a city that had suffered for years under the toll of one of the nation’s highest homicide rates. The city threw money and police at the problem, but the rate of fatal (and non-fatal) shootings remained. The human toll was staggering. In 2007, the low point, there were 45  homicides involving a firearm in the city of 106,000. Finally, it decided to try something entirely new:

Richmond hired consultants to come up with ideas, and in turn, the consultants approached [Devone] Boggan. It was obvious that heavy-handed tactics like police sweeps weren’t the solution. More than anything, Boggan, who’d been working to keep teen offenders out of prison, was struck by the pettiness of it all. The things that could get someone shot in Richmond were as trivial as stepping out to buy a bag of chips at the wrong time or in the wrong place. Boggan wondered: What if we identified the most likely perpetrators and paid them to stay out of trouble?

In late 2007, Boggan launched the Office of Neighborhood Safety, an experimental public-private partnership that’s introduced the “Richmond model” for rolling back street violence. It has done it with a mix of data mining and mentoring, and by crossing lines that other anti-crime initiatives have only tiptoed around. Four times a year, the program’s street team sifts through police records and its own intelligence to determine, with actuarial detachment, the 50 people in Richmond most likely to shoot someone and to be shot themselves. ONS tracks them and approaches the most lethal (and vulnerable) on the list, offering them a spot in a program that includes a stipend to turn their lives around. While ONS is city-funded and has the blessing of the chief of police, it resolutely does not share information with the cops. “It’s the only agency where you’re required to have a criminal background to be an employee,” Boggan jokes.

It was a crazy idea. But since ONS was established, the city’s murder rate has plunged steadily. In 2013, it dropped to 15 homicides per 100,000 residents—a 33 year low. In 2014, it dropped again. Boggan and his staff maintained that their program was responsible for a lot of that drop-off by keeping the highest-risk young men alive—and out of prison. Now they have a study to back them up.

Read our 2014 story on Richmond’s ambitious plan to bring down its homicide rate. Photograph by Brian L. Frank

On Monday, researchers from the National Council on Crime and Delinquency, a non-profit, published a process evaluation of ONS, studying its impact seven years in. The conclusion was positive: “While a number of factors including policy changes, policing efforts, an improving economic climate, and an overall decline in crime may have helped to facilitate this shift, many individuals interviewed for this evaluation cite the work of the ONS, which began in late 2007, as a strong contributing factor in a collaborative effort to decrease violence in Richmond.”

As evidence, the study cites the life-changing effect on fellows. Ninety-four percent of fellows are still alive. And perhaps just as remarkable, 79 percent have not been arrested or charged with gun-related offenses during that time period.

“While replication of the Fellowship itself may be more arduous because of the dynamic leadership associated with the current model, the framework of the Fellowship could be used to improve outcomes for communities across the country,” the study’s authors wrote. “The steps taken to craft programming developed with clients in mind, and being responsive to their needs and the needs of the community, can serve as a model.”