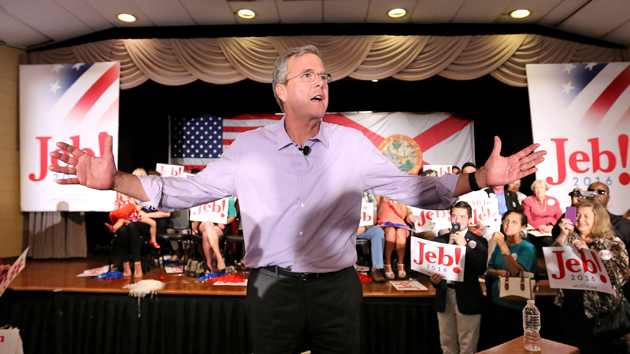 Jeb Bush knows it doesn’t look good if a candidate appears to get most of his financial support from a small group of wealthy donors. Earlier this spring, he asked donors to try not to give checks of more than $1 million to his super-PAC, and when the group announced its total haul for the first six months of the year, it took pains to emphasize that 9,400 of its more than 9,900 contributors had donated less than $25,000.

But now it’s going to be a lot harder for anyone to think of the Bush super-PAC—which completely dwarfs his campaign in terms of financial resources—as anything but driven by extremely wealthy donors.

This morning, the Right to Rise super-PAC filed its first disclosure reports, confirming that it had indeed raised $103 million in the first six months of the year. That is an unprecedented amount, but what’s really news is the distribution of the donations. It does appear that only about 500 donors gave more than $25,000 to the super-PAC, but donations of less than $25,000 accounted for just $21.7 million of the total. On the other end of the spectrum, 23 people gave more than $1 million to the super-PAC, contributing a total of $27.3 million.

The size of the donations is shocking. Despite the growing public perception that super-PACs are playgrounds for millionaires, the number of people who have ever given $1 million to political causes in their lifetimes is small. According to the Center for Responsive Politics, a non-partisan campaign finance organization (where I used to work), prior to this election cycle, just 475 individuals had ever given $1 million or more cumulatively since 1989, when it began keeping track of the data. Given the seven-figure donations that have already been reported for other super-PACs in the last week, the number is probably well over 500 people now, and the Right to Rise super-PAC is responsible for many of them.

The fact that only about 0.04 percent of Americans gave more than $2,600 last election cycle means that even most of the donors who gave less than $25,000 were already elite in terms of political donations. But with these latest numbers, even the under-$25,000 contributors begins to look like small donors by comparison.

Among Bush’s top donors are people with an interest in some of the top foreign policy debates right now. Miguel Fernandez, a private equity executive who chipped in $3 million, the largest contribution to the super-PAC, was a refugee from Cuba. Bush has slammed President Obama’s rapprochement with the Castro regime. Hushang Ansary was the Iranian ambassador to the US before the Iranian Revolution; he and his wife each donated $1 million. Bush has likewise opposed Obama’s nuclear-containment deal with Iran.

The list of top donors has some expected names, the dependable rainmakers who have long fueled the Bush family. Included among the top donors are big Texas names like oilmen T. Boone Pickens and Ray Hunt, as well as the widow of Harold Simmons, a Dallas chemical magnate who is one of the largest political donors of all time and who was a major source of money for Karl Rove’s various fundraising efforts over the years.

There are also a number of donors who are not people—something that could not have happened before the super-PAC era, or at least not on the same scale. NextEra Energy, Florida’s electric utility, donated $1 million to the super-PAC. That donation itself is unusual, given that publicly traded corporations have tended to avoid giving money to super-PACs, though they may legally do so after the Citizens United court decision in 2010. The US Sugar Corporation Charitable Trust donated $505,000—possibly a first for charities, which are generally excluded from involving themselves in politics.

Not all of the corporate donors are quite as transparent. One $1 million donation came from a shell corporation called Jasper Reserve LLC. On the disclosure forms, the company lists a Charleston, West Virginia address belonging to a law firm that has represented numerous coal companies over the years. The company appears to be registered in Delaware, effectively blocking any information about who founded it or runs it.