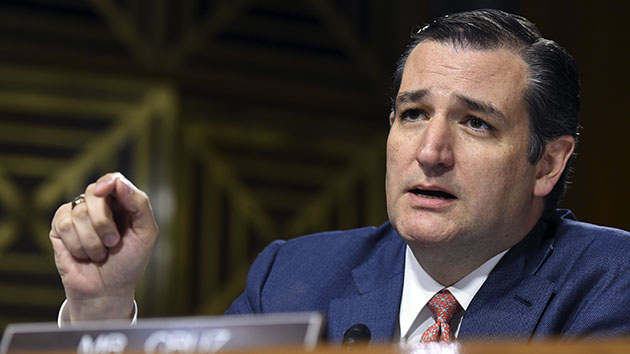 Ted Cruz is plowing ahead with an effort to subject Supreme Court justices to elections, tapping into conservative anger toward the court after last month’s rulings preserving the Affordable Care Act and making same-sex marriage legal nationwide.

After calling publicly for retention elections for the justices, the senator from Texas and Republican presidential candidate convened a Senate hearing on Wednesday to discuss “possible solutions” to the Supreme Court’s “activism.”

“This past term, the court crossed a line, continued its long descent into lawlessness to a level that I believe demands action,” a dour Cruz said in his opening statement at the hearing of a Senate Judiciary Committee subpanel. “Five unelected lawyers have declared themselves the rulers of 320 million Americans.”

Two of the three witnesses agreed that the court had overstepped its bounds. Ed Whelan, a former Justice Department official and legal blogger at the conservative National Review, said the gay marriage opinion, Obergefell v. Hodges, “is rivaled in Supreme Court history only by Dred Scott v. Sandford,” the decision that helped catalyze the Civil War, and Roe v. Wade, which recognized a woman’s right to an abortion.

Cruz’s retention election proposal received praise from one of the witnesses, John Eastman, a conservative scholar at Chapman University School of Law in California and board chairman of the National Organization for Marriage, a group that has fought bitterly to keep same-sex marriage illegal. (Eastman once equated homosexuality with “barbarism.”) Eastman suggested two additional constitutional amendments to limit, as he put it, “judicial tyranny”: Give a majority of states the power to override “an erroneous decision” of the court, and allow Congress to veto Supreme Court rulings by a two-thirds majority vote in both houses.

Although liberals fared well in the Supreme Court’s recent rulings, they often find themselves in agreement with Cruz’s position on term limits. The one liberal witness at the hearing, Neil Siegel, a constitutional expert at Duke Law School and former Senate Judiciary Committee counsel to then-Sen. Joe Biden, said he supported term limits. (He’s not the only prominent liberal legal scholar to do so.) Eastman, by contrast, said term limits wouldn’t save the court from a parade of activist judges, while Whelan didn’t take a position.

“I’ve become persuaded as a matter of constitutional design I think [term limits are] a good idea,” Siegel said Wednesday. “People are appointed in their forties. They can stay there till their nineties. I think nomination and confirmation is a way that over time we ensure democratic accountability. … I think regular changeover on the court, like an 18-year term, might be a very good idea and worth serious consideration.”

This is not the first time that politicians or scholars have proposed reigning in the lifetime appointment of Supreme Court justices. A recent poll found that two-thirds of Americans would support term limits for the court. But any such changes would likely require a politically difficult constitutional amendment, given that the Constitution says justices “shall hold their offices during good behavior”—generally interpreted to mean as long as they like, unless they’re impeached and removed from office.