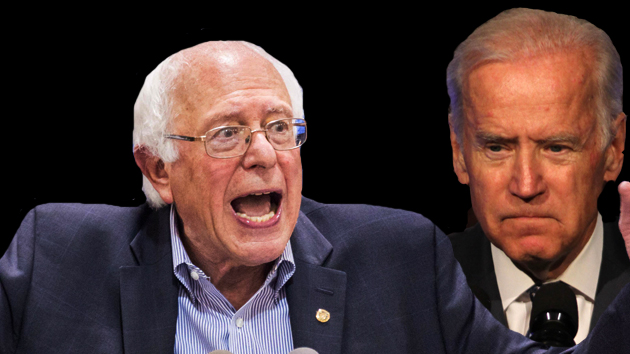 The politerati are getting a slight break from Trumpalooza these days, thanks to the Biden Bump. The veep has been actively discussing a possible presidential run with Democratic donors and strategists as he moves toward a final decision, and political handicappers have upped the odds that Biden, still coping with the recent death of his 46-year-old son Beau, will enter the fray. This has led to a torrent of speculation about what Biden will do and what a last-minute leap might mean for the 2016 race. Could it hurt the once-inevitable-but-now-email-burdened Hillary Clinton by providing Nervous-Nellie Democrats with an alternative? Could it help Clinton by offering her a more establishment-oriented sparring partner to vanquish—which would yield a positive narrative for her campaign?

The other day, Sen. Bernie Sanders, the independent seeking the Democratic nomination who has drawn thousands to rallies and boomed in recent polls, was asked how a Biden bid would affect the contest. He characteristically pooh-poohed the question. “Politics is not a soap opera,” he said. “What impact it will have on the race, I honestly don’t know. I mean, I wish I could tell you, but I don’t. Will it help or hurt me? Will it help or hurt Hillary Clinton? I just don’t know.”

Yet there are several reasons why a Biden run would be good for Sanders.

* Slicing up the pie. The most obvious benefit is a matter of basic math: If Biden is in the hunt, the establishment Democratic vote will be split. That means an outsider will need a lower percentage of the vote to win. If the race is essentially Clinton versus Sanders (assuming for now that Martin O’Malley, Jim Webb, and Lincoln Chaffee don’t escape from low-single-digit territory), the winner of a primary contest will have to bag close to 50 percent of the vote. Put in a competitive third candidate—and there’s no telling how strong a candidate Biden would be—and the number drops. Within the Sanders camp, his strategists assume the progressive populist wing of the Democratic electorate that already supports or could potentially support Sanders is about 35 percent. That number is undoubtedly closer to the percentage needed for a win in a contest with Biden than in one without him.

* Hey, look over there. A Biden-Clinton showdown would draw great media attention. It’s possible this might make it more difficult for Sanders to obtain extensive press coverage. But he has already demonstrated that his fiery message—free the nation from the grip of the billionaire class—has a viral quality to it. His rise in the polls has been a wildfire that has spread with little media oxygen. If Clinton and Biden are tussling on the main stage, Sanders might have more room for his issues-first campaign. It’s true that Biden likely would run as a champion of the average guy and present a campaign with a tinge of populism. But he cannot compete with Sanders’ more full-throated “us versus them message,” and as a former senator from Delaware, Biden might have to turn to banks and financial firms for campaign money, which could undermine any attempt on his part to win support from the Sanders (or Elizabeth Warren) side of the party.

*Permission to abandon ship. At the moment, there’s only one establishment candidate in the race. (Sanders has not received a single endorsement from a mainstream Democrat—not even from the Democratic senators with whom he serves.) There is nowhere else for most insider and conventional Democrats to go other than Hillaryland. And the Clinton camp does justifiably expect most Democratic players to pledge their allegiance to her campaign. In a Bidenized race, the playing field would get stirred up. There probably would not be a rush of Democratic officials in Washington embracing Sanders. But Clinton’s grip on the nomination would likely weaken, and Democrats would have a permission slip to question her candidacy openly—and explore other options. That could result in tangible or intangible benefits for Sanders.

* A longer free ride. The Clinton campaign so far has not blasted Sanders. It has watched warily as he has risen in the polls, but it has not fired at him. Team Sanders, though, does expect Clinton to confront the (possible) Sanders threat at some point. With Biden in the mix, Sanders may get a pass. Biden most likely would cut more into Clinton’s vote share than Sanders’, and the Clintonites would probably move quickly to neutralize the more pressing Biden threat. So with Clinton and her crew focused on Biden, Sanders would have a longer time in the express lane.

Sources close to Biden are telling reporters that he is thinking hard about this decision and that it’s a tough call for the 72-year-old vice president, especially with his family reeling from Beau’s death. Some Clinton advocates may have mixed feelings about a Biden candidacy, but the Sanders crowd ought to be eager for Biden to join in. The more insiders in a contest, the better for the outsider. Just ask Donald Trump.