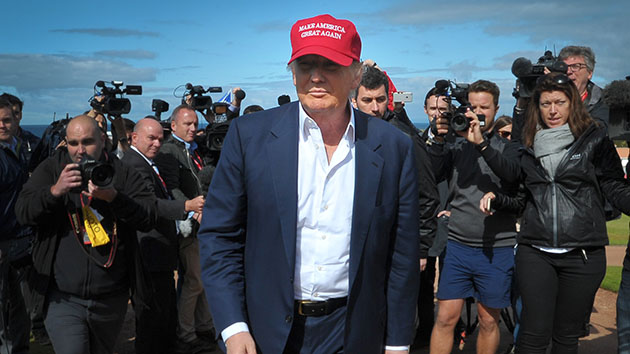 When Donald Trump takes center stage at the first Republican presidential primary debate Thursday night, he will likely begin his remarks by issuing the standard thank you to Fox News for hosting the event. But he really should be thanking the conservative news network for a whole lot more than that.

It’s no secret that Fox News both boosts the GOP and wields significant influence over the party—the so-called Fox News Effect. It covers the news that Republicans want covered long after the mainstream media have moved on (Benghazi! IRS targeting! Planned Parenthood tapes!). But the network, where many Republican voters get most of their news, is also partly responsible for setting the party’s agenda and boosting its major players, including Trump. And by helping Trump maneuver to the front of the GOP pack and putting him in the spotlight Thursday night, Fox may be doing significant damage to the party it has long favored.

When the Republican National Committee assigned Fox the first of up to 12 primary debates, it also gave the network the ability to choose the debate format and qualification criteria. (The RNC says that because it is neither an 501(c)(3) nor a media outlet, it is not legally allowed to set the terms of the debate under federal election law.) Fox decided to cap participation from the large GOP field of candidates at 10, determined by who was polling the highest—according to the polls Fox chose to use. The candidate with the highest poll numbers will be center stage Thursday night. Trump’s numbers are nearly double those of Jeb Bush and Scott Walker, who occupy the No. 2 and No. 3 spots, respectively.

Several of the candidates on the debate stage Thursday night owe much of their success to the network, either as frequent guests or as hosts of Fox News shows. Former Arkansas Gov. Mike Huckabee built his brand with the help of his own Fox News show. Ohio Gov. John Kasich hosted “From the Heartland with John Kasich” on Fox from 2001 to 2007. And then there’s Trump, who has been a frequent guest for over a decade, giving his thoughts on the news of the day, including his own past flirtations with running for president. Recently, New York magazine’s Gabriel Sherman reported that Fox News CEO Roger Ailes “is pushing Fox to defend Trump’s most outlandish comments.” In June, Fox gave Trump more coverage than any other candidate, according to Sherman.

“I don’t think there’s any question that they essentially made Trump, because going back several years now they would invite him on quite often to discuss political issues, and in the process made him a political figure,” says Bruce Bartlett, a former Reagan administration official and a critic of the Republican Party’s recent ideological move to the right. “Trump is sort of the most obvious example in which Fox is exercising outside influence on the Republican electoral process. I think without Fox, he would not be running, let alone a serious candidate.”

Kevin Arceneaux, a political scientist at Temple University, says Fox’s influence over the debate—and its role in making Trump a front-runner—is part of a larger trend of the declining power of parties in choosing their own nominees. In the 2008 book “The Party Decides,” four political scientists demonstrated that for the past several decades, the candidate in both parties favored by the party’s elites—members of Congress, governors, and influential local party leaders—always won the nomination. The parties, the book argues, “scrutinize and winnow the field before voters get involved, attempt to build coalitions behind a single preferred candidate, and sway voters to ratify their choice.” And since the 1970s, they have been successful. But Arceneaux believes that may change this year as parties cede power to the media and the billionaire donors who have emerged since 2010, when the Supreme Court struck down limits on outside election spending in Citizens United v. Federal Election Commission. “The parties still set the rules for how nominations take place,” he says. “But they have a bit more competition at the table saying who should be the standard bearer for the party.”

To Bartlett, the question is not whether Fox is influential, but whether its influence is good or bad for the GOP. In an academic paper earlier this year, Bartlett posited that the network, which once gave voice to the party’s agenda, may now be directing that agenda to the detriment of the party. He called it a “self-brainwashing” that has pushed the party to the right, making it harder for Republicans to win presidential elections.

The RNC has voiced support for how Fox News has organized the first debate, but the setup could inadvertently highlight the party’s weaknesses. Making Trump the face of the party Thursday night might hurt the GOP “if only because of his toxic effect on Latinos,” a critical voting block in several swing states, says Bartlett. Trump alienated many Latinos when he suggested undocumented immigrants from Mexico are “rapists.”

“If I was a Democrat, I’d just stand back—I’d do everything in my power to make Trump the face of the Republican Party,” Bartlett says. “Not that they have to make much effort.”

Whatever the outcome for the GOP, it’s all good news for Fox. The network is, after all, a for-profit business, and putting Trump on stage will drive up viewership. “I’ll be watching,” says Bartlett. “I wouldn’t be watching if Trump wasn’t there, I guarantee you.”