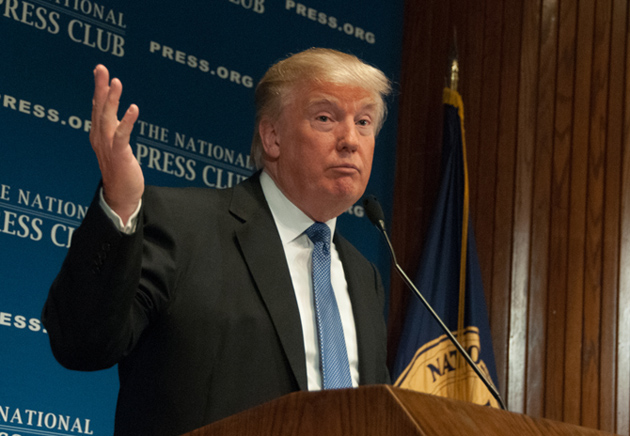 Over at Vox, David Roberts investigates Republican presidential frontrunner Donald Trump’s views on climate change and finds that they are thoughtful, nuanced, and carefully grounded in science.

Kidding, kidding. Trump’s proclamations on climate change are as sweeping, bombastic, and asinine as his shocking claim that Mexican immigrants are a bunch of rapists. Here are a couple of typical tweets:

It’s snowing & freezing in NYC. What the hell ever happened to global warming?

Ice storm rolls from Texas to Tennessee – I’m in Los Angeles and it’s freezing. Global warming is a total, and very expensive, hoax!

Trump thinks cold weather in the US in winter disproves the demonstrable fact that global average temperatures have been steadily rising since the Industrial Revolution. Roberts’ pithy conclusion is that Trump’s opinions are wrong, but, “They are, for the most part, mainstream Republican positions.” That depends on how you look at it. Rejecting climate science is the norm among Republican politicians. (Republican voters are more evenly split between climate science acceptance and denial.) But Trump’s specific approach to climate change represents a more rare and particularly disturbing species of climate science denialism.

Most other Republican presidential candidates do not actually deny that the Earth is getting warmer. Rather, they hem and haw about whether humans and greenhouse gas emissions are the cause of it, and to what extent. Here are some examples:

Jeb Bush: “I think global warming may be real…It is not unanimous among scientists that it is disproportionately manmade.”

And just yesterday, John Kasich: “I think that man absolutely affects the environment, but as to whether, what the impact is…the overall impact—I think that’s a legitimate debate.”

They argue that the science of human-induced climate change is incomplete, but they accept that warming is measured by data and that NASA’s temperature readings are accurate.

Some more extreme conservatives, like Ted Cruz, question whether the data actually even shows the Earth is warming. The more mainstream way of doing this, which Cruz did in his appearance at the Koch brothers’ recent confab in California, is to selectively and misleadingly present very specific facts in order to create a false impression. The more fringey, conspiracist approach, which Cruz also engaged in at that event, is to claim that the temperature measurements are being manufactured by scientists with an agenda. Cruz said, “If you look at satellite data for the last 18 years, there’s been zero recorded warming…They’re cooking the books. They’re actually adjusting the numbers.”

That’s pretty out there, but less so still than Trump because Cruz does accept that one would establish warming by measuring the temperature, and by doing so not just on one day in one place, but all over the Earth for years. Trump doesn’t selectively present the data or assert that it’s been rigged, he just ignores it. If it’s cold outside in New York in the winter, Trump says, then there is no global warming. His problem is twofold: He does not understand the difference between weather (still often cold in New York in the winter) and climate (gradually warming on average over the entire Earth), and he does not respect the difference between data and anecdote. Trump is hardly unique in this regard—remember Senate Environment Committee Chair James Inhofe (R-Okla.) and his snowball—but Trump is the only top-tier Republican presidential candidate who subscribes to it.

So the fact that Trump is in first place in the GOP presidential polls, with more than twice as high a percentage as his nearest competitor, Jeb Bush, reveals some alarming things about a large segment of the Republican voter base (not smart) and the prospects for reaching consensus on the need for climate action (not good).

Trump isn’t merely another extremist who rejects climate science. Trump isn’t really a conservative at all. He’s a reactionary populist who has elevated ignorance to a political philosophy. Call it ignorantism.

Even if Trump hadn’t said anything about climate change in particular, his dismissiveness toward objective fact-finding processes would bode ill for the environment. Government policies—economic, public health, environmental—require an accurate measurement of data to inform policymakers who write laws and regulators who enforce them. And a plurality of the Republican electorate currently supports a presidential candidate who does not accept that data, rather than personal anecdote, is how one measures empirical fact.

Despite the widespread opinion that Trump performed poorly in the first Republican debate last week, the only poll to come out since shows him still in the lead with 23 percent of Republican voters. The same poll shows 29 percent of respondents saying Trump did worst in the debate. But a lot of Republicans find his buffoonery and belligerent ignorance compelling.

Even though Trump will not be the GOP nominee, whoever it is will need to keep Trump’s supporters on board. And all those climate hawks hoping the GOP will stop being “the party of stupid” will be disappointed.