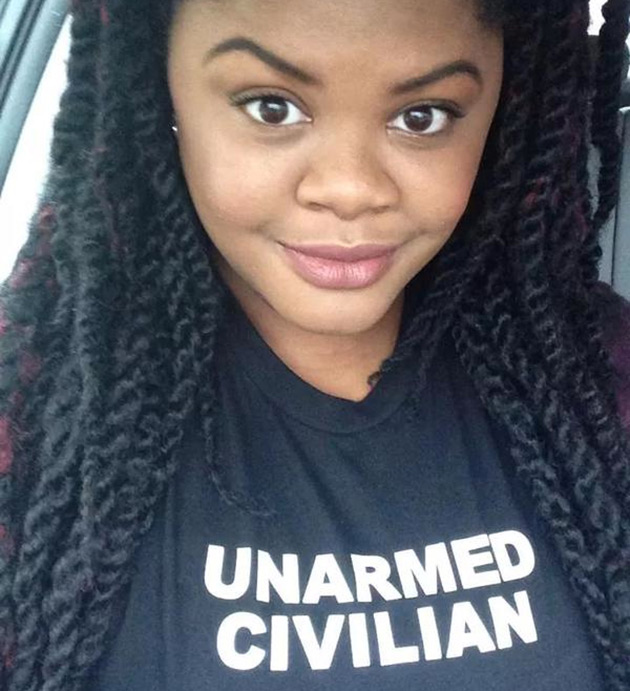 When Michael Brown was shot by a police officer in Ferguson, Missouri on August 9, 2014, and the city made international headlines for the militarized response to the largely peaceful protests sparked by his death, Johnetta Elzie was was right on the front lines. Her livestreamed video of the demonstrations earned her a massive social media following, and she quickly assumed a role as one of the protests’ lead organizers.

In the year since the Ferguson protests, police treatment of African Americans has come under intense scrutiny. Numerous police killings of unarmed black men in New York, Baltimore, North Charleston, and elsewhere have drawn national attention. And across the country, activists and community leaders have demanded accountability from officers and reforms from lawmakers. These efforts already have had some results. Still, police are on track to kill more people this year than last year—upwards of 1,000 by year’s end. Black people are more than twice as likely to be killed than white people.

I spoke with Elzie, who is now an organizer with the Ferguson-based group We The Protesters and with Amnesty International. She is co-editor of the This Is The Movement newsletter, and her writing and commentary has appeared in Ebony, the Wall Street Journal, Al Jazeera?, and the Feminist Wire. She and her fellow organizer DeRay McKesson were the focus of a New York Times Magazine profile in May. Her participation in protests in Baltimore earlier this year prompted a cybersecurity firm to identify her as a “threat actor” in a report it provided to the city. Though she insists the Black Lives Matter movement is a leaderless one sustained by communal anger, the 25-year-old Elzie has been called on to serve as one of its spokespeople at conferences, panels, and meetings with public officials and lawmakers. In our conversation, she reflected on the Ferguson protests, the year since, and what lies ahead for the Black Lives Matter movement.

Mother Jones: Did you have a real goal when you first went to Ferguson?

Johnetta Elzie: My first protest was on August 9th. And after going and talking to people about what they saw [at the scene of Michael Brown’s death], I felt like there had to be a next step, something else that I could do. So I searched Twitter and saw there was a protest at the Ferguson Police Department the next day. And because I was looking for a next step, I felt like that was a step in the right direction for me.

“When you see a group of people who are literally standing unarmed against the government…I think for most people it’s quite obvious why they should be moved to action.”

Plus, I remembered how I felt after George Zimmerman got away with killing Trayvon. There was a rally on the South Side of St. Louis. I went. I wore my hoodie. But I felt like that wasn’t enough. But I didn’t know what else could be done, especially because I didn’t live in Florida. So remembering how helpless I felt about that, and learning that there was a protest [for Michael Brown] the next day in my hometown, I decided to go. My friends and I, we all went. The end goal was for me to feel like I was playing a part in the mourning process with my community. And we literally just wanted answers as to why this happened.

MJ: Michael Brown’s killing and the Ferguson protests set off protests nationwide and internationally. Why do you think what happened in Ferguson resonated with so many people?

JE: I didn’t anticipate that. My first help with getting tear-gassed came from Palestine. I would tweet that I just got tear-gassed, my face burns, my mouth burns, my throat burns. And people from Palestine would tweet pictures of tear-gas cannisters saying, “Do they look like this? This is probably the same tear gas that they used on us. Here’s how you fix the burning.” Oppressed people are everywhere. Our situation in America, the way black people are experiencing living in America, is very similar to how Palestinians are experiencing living in their homes by the Israeli government. It’s global. A lot of folks don’t make those connections. But I think it’s just the part that makes humans human. When you see a group of people who are literally standing unarmed against the government, the state, and the state is armed head to toe in military gear. I think for most people it’s quite obvious why they should be moved to action. Even though it might not be happening where you live right now.

MJ: How has the national conversation surrounding police violence changed since Ferguson?

JE: We have more videos now. That has forced the conversation to change. Instead of it just being a blurb, and moving on to the next thing, some news publications and journalists are now asking the hard questions about fatal police shootings or white vigilantes who are taking it upon themselves to act, like in Charleston. They are asking the hard questions that need to be asked of state officials, of law enforcement, about why things are happening, and why they are protecting police through unions and things like that. I think that Ferguson has changed things, so that every fatal police shooting that happens has made some type of headline since August, in a way where people immediately jump on it, get the facts, or are digging for facts, or are following it and holding people accountable, in a new way that hasn’t happened for my generation. And there has been some new legislation that has been introduced across the country.

“That’s something that blows my mind, that there are places in America where police kill somebody and no one asks questions about it at all.”

MJ: Are you satisfied with the progress that’s been made in the past year?

JE: The police are still killing people. Six people died Wednesday. But I think it is so unfair that people expect leaps and bounds to happen in just 365 days. Nothing in the Civil Rights Movement was accomplished in a day. The Civil Rights Movement spanned 10 years. So, for people to expect so much out of one year is really, really wild to me. And that question kind of shows me how far removed people are from this. Proximity matters. So, if you are an onlooker, and you’re just looking for progress and improvements and things like that, then that’s a different conversation to have with someone else who’s not so invested. But for some people, this is their life. They’ve been harmed by the police. They’ve seen their family and friends harmed by the police. And this is emotional work to be doing. So in this one year, I feel like we have accomplished much. But there is still a lot to do because police are still protected by their unions, by the institution of policing in general. And still have been killing people at higher rates than even last year, for example. July was literally the deadliest month of 2015. And that’s a problem.

MJ: If you could impose some major policy changes that would help stem police killings, what would they be?

JE: I would like to see concrete solutions to holding police accountable. There was a deadly force report that came out a month ago, and there are some states that have zero laws on the books to hold police accountable if they use deadly force in any case. That’s something that blows my mind, that there are places in America where police kill somebody and no one asks questions about it at all. I think that’s the top one for me. Body cameras, too. But I don’t put all my faith in body cameras. In Samuel DuBose’s case in Cincinnati, there were body cameras on two other officers who still lied and they’re not being charged. So that’s not the only solution.

MJ: What role do you see police and criminal justice reform playing in the 2016 election?

JE: I don’t have much to say about the 2016 election at this point. There are not any candidates that have piqued my interest. But I do understand that someone will be president. So I’m taking my time and learning and reading some of their proposals. I’m informing myself so I can make an informed decision on who I vote for next election. But at this time, no, no one has piqued my interest in all of the things that we are learning about their campaigns so far.