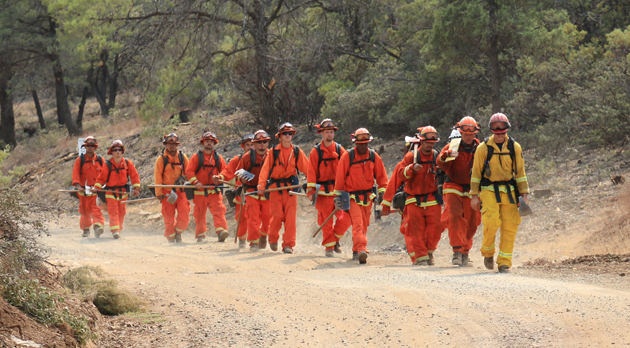 Inmate firefighters walk down a road after work in Lake County.Julia Lurie

On the main road through Lower Lake, a town of 1,294 people in the heart of Northern California’s Lake County, spray-painted signs reading, “THANK YOU FIREFIGHTERS!” hang from fences and windows. Over the past month, the town, just north of Napa’s vineyards and south of the forests of Mendocino, has seen two of the biggest fires in the state’s recent history decimate roughly 70,000 acres of land.

The fires are mostly out now, but in recent media coverage of them, a surprising statistic came out: More than 30 percent of California’s wildfire fighters are state prisoners—low-level felons who volunteered to spend their sentences doing the manual labor of forest fire prevention and response rather than remaining behind bars.

The roughly 4,000 inmate firefighters receive a sentence reduction and $1 per hour while fighting fires, saving the state $80 million per year. After passing a physical exam and going through the same two-week training course that civilian firefighters do, they’re sent to one of 44 “fire camps” across the state—barracks-style quarters that serve as a home base from which to fight fires. Last week, I went to check out the camp in Lower Lake, called Konocti Camp. 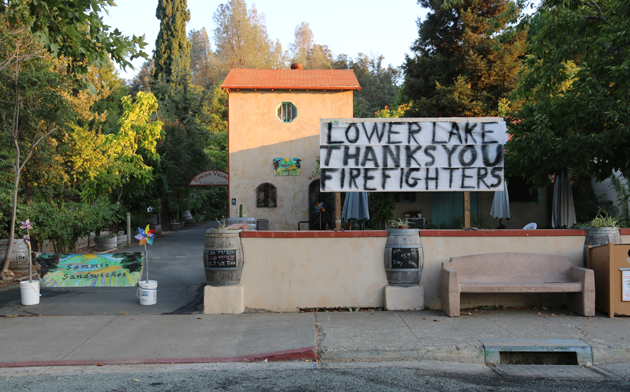 A “thank you” sign in front of a Lower Lake sandwich shop. All photos by Julia Lurie 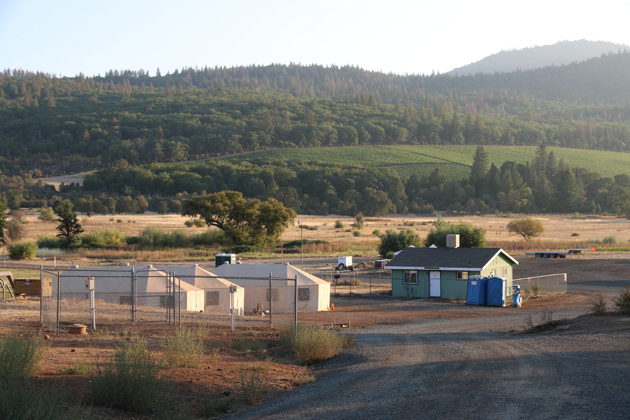 Konocti Camp’s yurts, where inmates who traveled from other camps slept during the Rocky and Jerusalem fires.

The first thing I noticed about Konocti was that it doesn’t feel like a normal prison. There are no fences or barbed wire around the perimeter, which separates the camp from nearby vineyards. Inmates wander freely within the camp during their leisure time; they line up to be counted every two hours. There’s an outdoor gym area, a rec room, an arts and crafts room (complete with hand saws), and a garden that grows much of the cafeteria’s produce. When there’s a big fire nearby, inmates from other fire camps come to stay, sleeping in yurts spread across the fields.

Escape attempts are exceedingly rare; prisoners know that if they misbehave, they’ll be sent back to a typical prison. “I’m trying to do everything right to stay here,” one inmate told me. (That said, attempts do happen. Last week, a juvenile in a similar program in Washington shot himself with a stolen gun after escaping from a fire camp.)

Konocti camp commander Jeff Auzenne worked for more than a decade as a state prison guard before coming to Konocti. “Inside the walls, you don’t really see a difference in these guys as far as their attitudes, and who you can help and who you can’t help,” he says. “Here, you see a lot of potential in these guys, and you can tell the guys you can really help.” 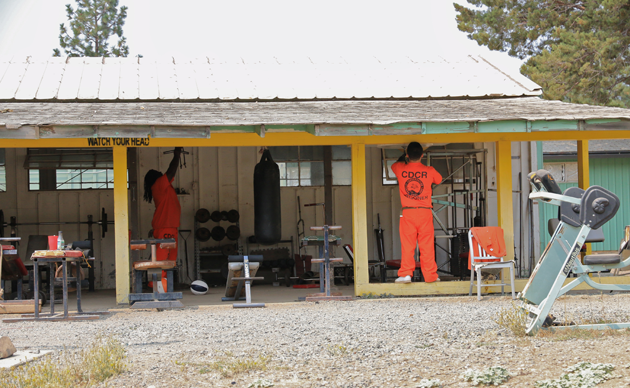 Inmates work out during their free time. 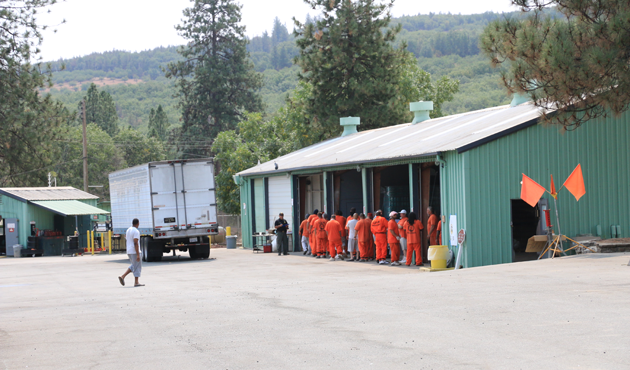 Inmates line up to be counted at noon. 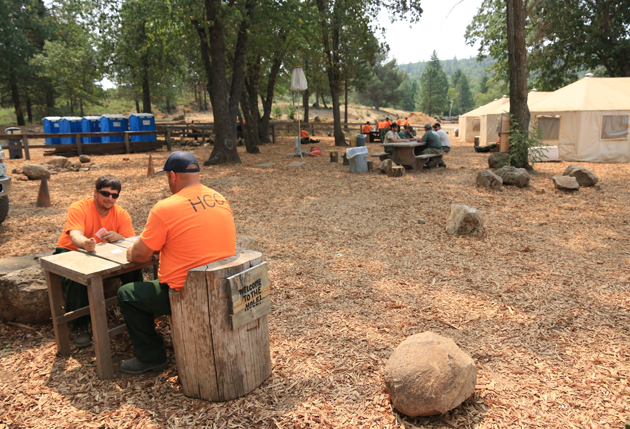 The fires have been so extreme this year that inmates from other states have come to help fight them. Above, inmates from a Nevada fire crew wait to hear if they will stay at camp or move to another fire.

Inmates are divided into fire teams, groups of about 15 people who live and work together. When fighting an active fire, the teams rotate through 24-hour shifts, primarily cutting “fire lines,” or four-foot-wide trails of dirt through vegetation on the edge of the fire to contain the blaze. They use hand tools and typically go where bulldozers can’t—which is to say, on steep inclines and dense terrain.

Members each have roles named after the tools they use, from the “saw,” who cuts down vegetation with a chainsaw, to the “Pulaskis,” who break down the wood with Pulaski pickaxes. At the camp, the teams are supervised by prison guards, but at fires, they’re overseen by Cal Fire captains. “It’s more unity here than it would be in the yard because we’ve gotta work together,” says Norbert Wilson, in charge of a Pulaski. “It’s kind of a brother bond.” 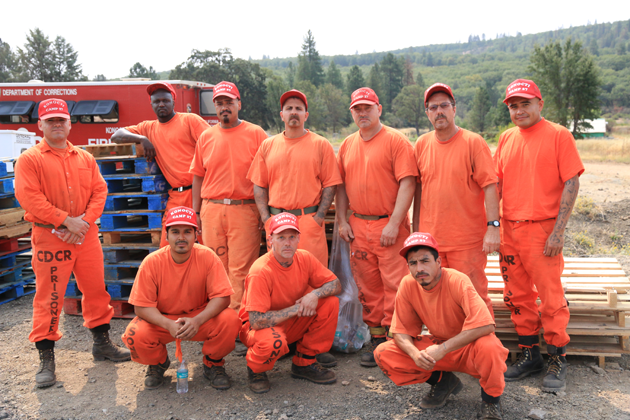 Norbert Wilson, second from the left on the top row, is in charge of cutting up vegetation with a pickaxe.

I was surprised by how few black inmates I saw, given that African Americans make up 30 percent of the prison population in California. Bill, a spokesman for the California Department of Corrections and Rehabilitation, says the agency doesn’t keep track of the racial breakdown of the camps because it changes so often. “I’ve never paid much attention to the ethnic background of the firefighters when I’ve been at a camp,” he wrote in an email. “Their ability and willingness to do the job is the most influential factor in who is there…Remember, they all volunteer.”

From camp, I tagged along with a fire crew as they worked through the afternoon in a spot near the recent fires, doing fire prevention work. They completed tasks like widening roads or cutting away dry vegetation from particularly risky areas. 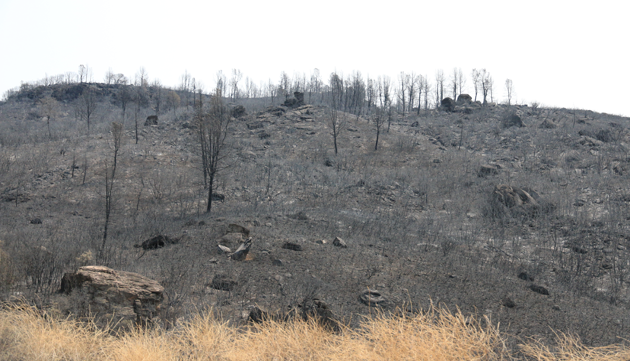 A hill in Lake county that was scorched by the Rocky Fire earlier this month. 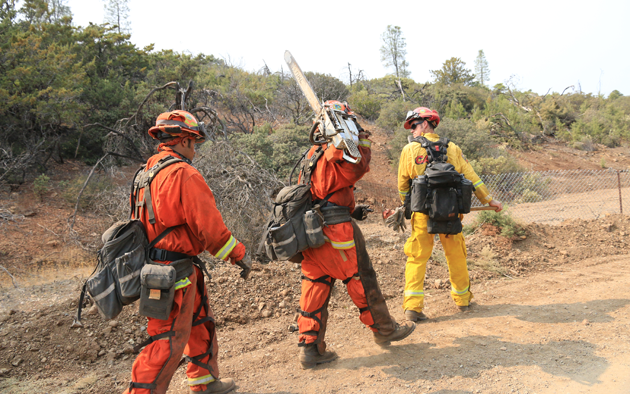 Each fire team has at least one chainsaw to cut down vegetation. While working, crews are overseen by fire captains, not prison guards. 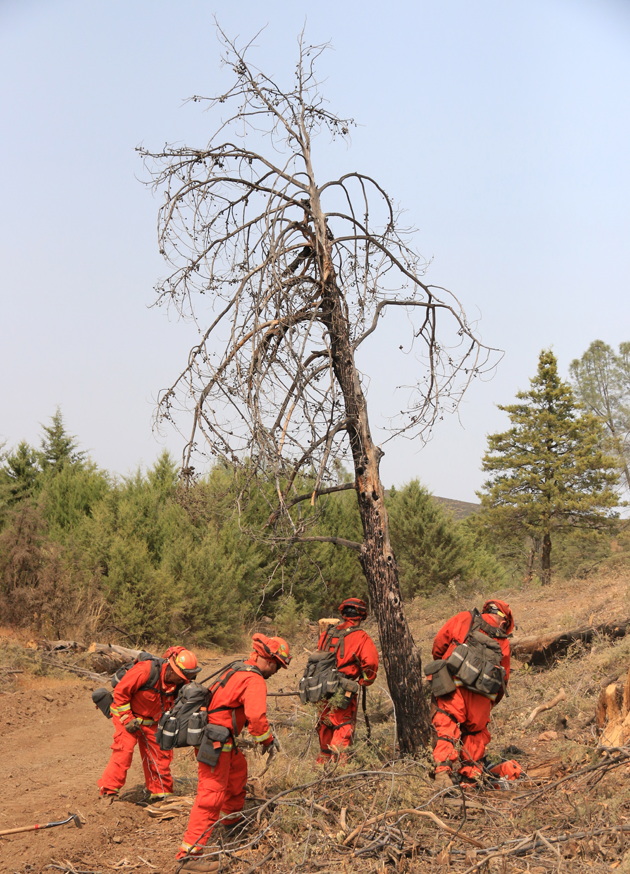 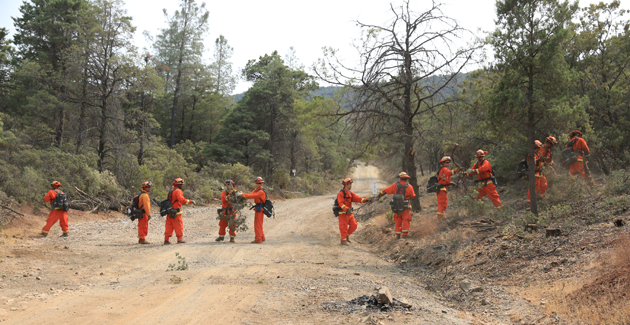 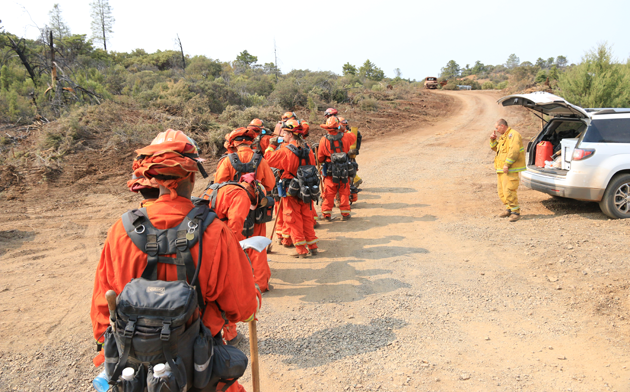 Inmates stand in line while sipping Gatorade at the end of the work day.

The work, both on active fires and on a normal prevention day, is exhausting and unrelenting. “For my first fire, it took us three and half hours, switchbacks, to the top of the mountain,” says Robert Gabriel, an inmate from East Los Angeles. “Once we got there, it was just torching.” The chief told them they could take a quick nap if they wanted, but Gabriel thought, “I’m not even gonna close my eyes, man!” He adds, “There are times where it’s like, ‘Man, did I really sign up for this?'”

Still, the inmates I spoke with unanimously said they would rather be at fire camp than in a typical prison. “Not having the locked door, and being able to go out and play pool, shoot hoops—it’s just a closer step to freedom,” says Gabriel. 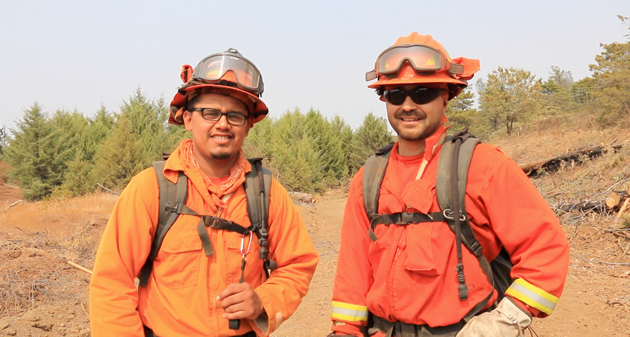 Inmates Robert Gabriel and Samuel Serna take a break from their work.

Some inmates work full time in a handful of coveted, camp-only positions—cooking, cleaning, and otherwise keeping up the camp. Keith Collier, an inmate from Hayward, California, works in the camp’s wastewater treatment plant, doing a similar job to what he did before he was sent to prison for five years for a DUI. “I was able to continue my career here,” he tells me. “That’s the whole reason I came to this camp.” 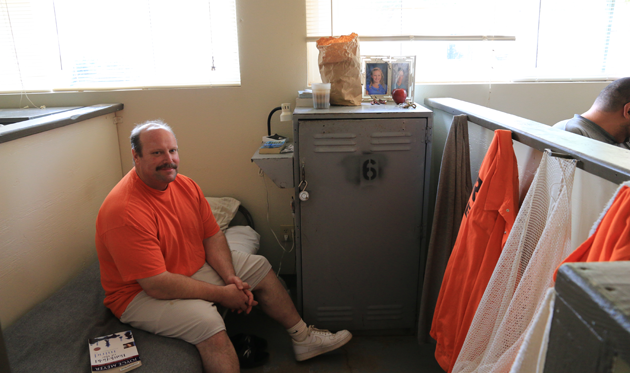 Keith Collier works in the camp’s wastewater treatment plant. He’ll return to his family in Hayward, California, next week.

Rudy Quintanilla is the head gardener at the camp, growing a variety of produce used in the kitchen, from tomatoes and peppers to melons and pumpkins. “I’ve been in the camp so long that I know what type of tomato calls for what type of recipe,” he says, showing me the camp’s many varieties of tomatoes.

A landscaper before he went to prison, also for a DUI, Quintanilla says he plans to keep up landscaping when he leaves. 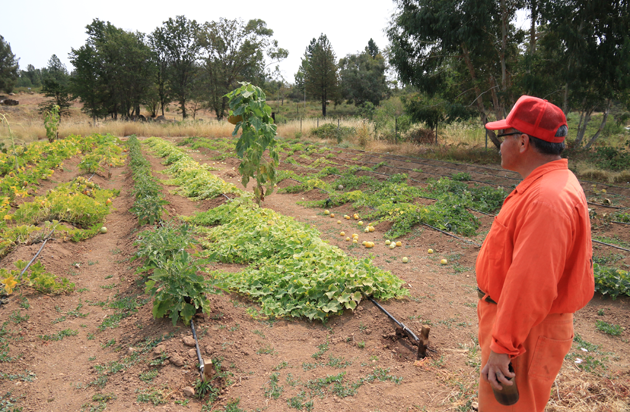 Rudy Quintanilla is in charge of the garden, which cuts the camp’s food costs.

Inmates sit down for hot meals at breakfast and dinner, and the food comes in massive servings to keep them energized. Food is notoriously better at camp than in normal prisons. 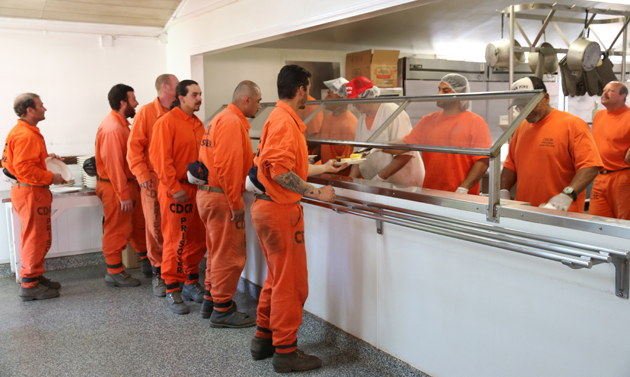 California inmates serve dinner to the fire team from Nevada. 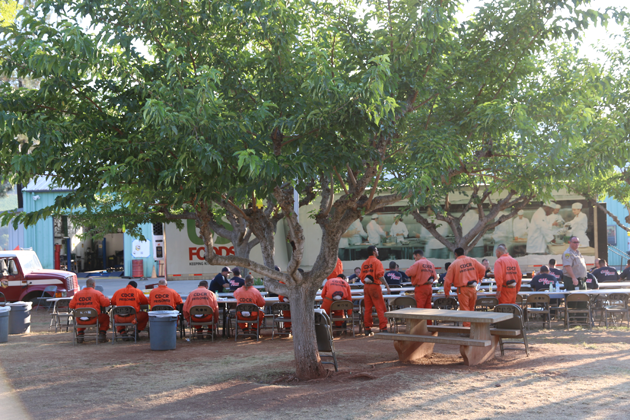 When a camp expands during a fire, inmates eat outside. 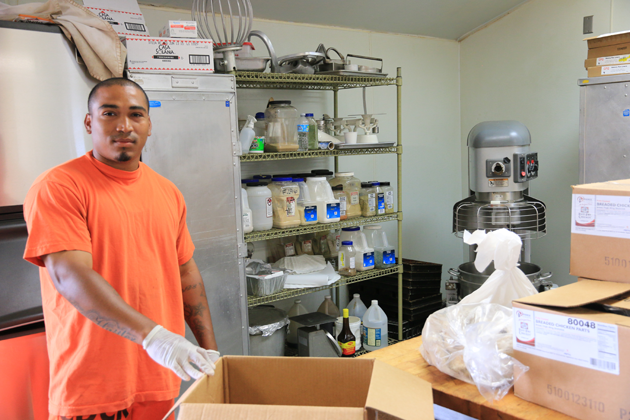 Benjamin, a cook at the camp, preps for tonight’s meal: fried chicken and corn.

When I met Benjamin, the head cook, he was preparing for the night’s dinner: fried chicken, corn on the cob, potato gratin, and ranch-style beans. Benjamin is in prison for burglary; before his incarceration, he was a chef at a Las Vegas casino.

Mid-conversation, he turned to the guard giving me a tour and smiled. “I got good news,” he said. “I’m going home, man! In a month.”

“Good for you,” said Commander Auzenne, who’d been giving me a tour. “Bad for us, good for him.”