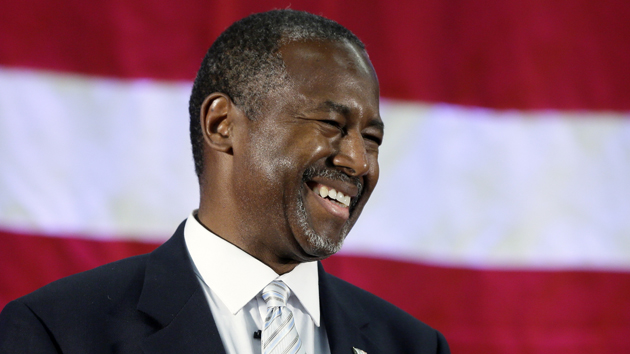 Ben Carson, the retired neurosurgeon and political novice near the top of the GOP presidential polls, does not spend much time and energy promoting specific policy stances. He has soared to a statistical tie with Donald Trump by emphasizing his outsider status and calling to revive America, deploying general right-wing rhetoric that resonates with social conservatives. At the recent Republican debate, he said, “The thing that is probably most important is having a brain.” But he has provided one important clue as to his fundamental political worldview, by repeatedly endorsing a far-right conspiracy theorist named W. Cleon Skousen, who was characterized in 2007 by the conservative National Review as an “all-around nutjob.” Skousen came to prominence in the 1950s as a virulent anti-Communist crusader; he later claimed that a global cabal of bankers controlled the world from behind the scenes, and he once wrote a book that referred to the “blessings of slavery.”

Carson swears by Skousen, who died in 2006. In a July 2014 interview, Carson contended that Marxist forces had been using liberals and the mainstream media to undermine the United States. His source: Skousen. “There is a book called The Naked Communist,” he said. “It was written in 1958. Cleon Skousen lays out the whole agenda, including the importance of getting people into important positions in the mainstream media so they can help drive the agenda. Well, that’s what’s going on now.” Four months later, while being interviewed by Megyn Kelly on Fox News, Carson denounced unnamed Marxists who were presently seeking to destroy American society: “There was a guy who was a former CIA agent by the name of Cleon Skousen who wrote a book in 1958 called The Naked Communist, and it laid out the whole agenda. You would think by reading it that it was written last year—showing what they’re trying to do to American families, what they’re trying to do to our Judeo-Christian faith, what they’re doing to morality.” (Skousen had been an FBI employee—not a CIA officer—and mainly engaged in administrative and clerical duties; later he was a professor at Brigham Young University and police chief of Salt Lake City.) And the most recent edition of this Skousen book boasts Carson’s endorsement on the front cover: “The Naked Communist lays out the whole progressive plan. It is unbelievable how fast it has been achieved.”

Skousen’s book was a hyperbolic, far-from-sophisticated Cold War denouncement of communism and the Soviet Union. Marx, Skousen claimed, had set out “to create a race of human beings conditioned to think like criminals.” And in McCarthyesque fashion, Skousen contended that “agents of communism” had “penetrated every echelon of American society—including some of the highest offices of the United States Government.” He insisted that many “loyal Americans” had been duped by Communists into doing the Reds’ dirty work because “they are not aware that these objectives are designed to destroy us.” Thus, these fellow travelers and naive citizens were part of a “campaign to soften America for the final takeover.”

Skousen listed dozens of the goals of the commies and their useful idiots, including pushing free trade, promoting coexistence with the Soviet bloc, capturing “one or both of the political parties in the United States,” winning control of schools (“use them as transmission belts for socialism and current Communist propaganda”), and infiltrating the press (“get control of book-review assignments, editorial writing, and policy making positions”). He said they wanted to control “key positions in radio, TV, and motion pictures,” weaken American culture by degrading artistic expression (and substituting “good sculpture from parks and building” with “shapeless, awkward and meaningless forms”), and present homosexuality as “normal, natural, and healthy.” What’s more, he claimed, they wanted to discredit the Bible, eliminate prayer in schools, demean the American Founding Fathers as “selfish aristocrats who had no concern for the ‘common man,'” and support “any socialist movement to give centralized control over any part of the culture—education, social agencies, welfare programs, mental health clinics, etc.” He said they also wanted to encourage divorce and promiscuity, incite “special-interest groups” to “rise up…to solve economic, political or social problems,” and seize control of unions and big business.

The most recent edition of Cleon Skousen’s book boasts Carson’s endorsement on the front cover: “The Naked Communist lays out the whole progressive plan. It is unbelievable how fast it has been achieved.”

Skousen, who had been active in the John Birch Society, worried that communists were taking over local PTAs. “Communist influences,” he wrote, “are gnawing away everywhere and thousands of confused citizens often aid and abet them by operating in a vacuum of their own ignorance.” In The Naked Communist, he revealed that the Communists even had a date for ultimate victory: “Total conquest is to be completed by around 1973.” Five decades after the book was released, the National Review huffed that The Naked Communist was “so irrational in its paranoia that it would have made Whittaker Chambers blush. According to Skousen, The Manchurian Candidate was a documentary—he earnestly believed Communists sought to create ‘a regimented breed of Pavlovian men whose minds could be triggered into immediate action by signals from their masters.'”

Carson’s repeated and full-throated endorsements of Skousen—which tend to be coupled with dire warnings about the covert scheming of Marxists and Saul Alinsky—suggest that Carson shares Skousen’s belief that the civil rights movement, acceptance of homosexuality, the rise of abstract art and modernism, and the advent of Medicare, Social Security, and other safety-net programs have all been part of a clandestine plot waged by Communists or other dark forces to destroy the United States. As Carson points out, this nefarious plotting is still in the works today.

Carson’s faith in Skousen is even more unsettling because Skousen was far more than a rabid anti-commie crusader and Red-baiter. He was a complete crank. He maintained that the Founding Fathers were direct descendants of the Lost Tribes of Israel and contended that a global cabal of bankers controlled the world.

In a 1962 book, Skousen decried homosexuality and insisted, “Every boy should know that masturbation may be the first step to homosexuality.” In his 1970 book, The Naked Capitalist, Skousen disclosed another worldwide conspiracy and maintained that a sinister “secret society of the London-Wall Street axis”—which included the Council on Foreign Relations—controlled the planet and orchestrated global events, financing revolutions and collaborating with “dictatorial forces” to preserve its power. As Salon noted in 2009, in this work, “Skousen claimed the Anglo-American banking establishment had a long history of such activity going back to the Bolshevik Revolution. He substantiated this claim by citing the work of a former Czarist army officer named Arsene de Goulevitch. Among Goulevitch’s own sources is Boris Brasol, a pro-Nazi Russian émigré who provided Henry Ford with the first English translation of the Protocols of the Elders of Zion.”

Though Skousen was a pioneer in denouncing the New World Order and the globalist bankers who pulled all the strings, he still had his eyes on the Marxists. The same year that he birthed The Naked Capitalist, he claimed that criticism of the Mormon church for banning African Americans from its priesthood was a communist conspiracy against the church. In The Five Thousand Year Leap, a supposed history influenced by Mormon theology and published in 1981, Skousen asserted that the Constitution is rooted in the Bible. (Glenn Beck, a big Skousen fan, wrote the introduction to a new edition of this book in 2009.) Skousen’s 1985 book, The Making of America, came close to idealizing slavery, quoting a 1934 essay: “If the pickaninnies ran naked it was generally from choice, and when the white boys had to put on shoes and go away to school they were likely to envy the freedom of their colored playmates.”

In 1979, the Mormon church issued a directive distancing itself from a conservative organization started by Skousen.

In recent years, Beck has been Skousen’s No. 1 booster, and during a 2007 radio interview Mitt Romney praised Skousen, who had been his professor at BYU. Carson, though, might now hold the mantle as Skousen’s top champion. Yet as the National Review pointed out regarding Romney, “Skousen is not an association a presidential candidate should loudly trumpet.”

Carson’s enthusiastic embrace of this kook, who has peddled outlandish conspiracy theories and alternative histories with taints of racism and anti-Semitism, says as much about the GOP candidate as his policy positions and his anecdotes about his inspiring life story that brought him from poverty to the pinnacle of the medical profession. In recent days, Carson, a devout Seventh-day Adventist, has taken heat for his belief that Satan is behind the Big Bang theory and the promotion of evolution. His support of Skousen deserves as much attention. Skousen’s world was dark, paranoid, and nutty. How is it that Carson found a home here?