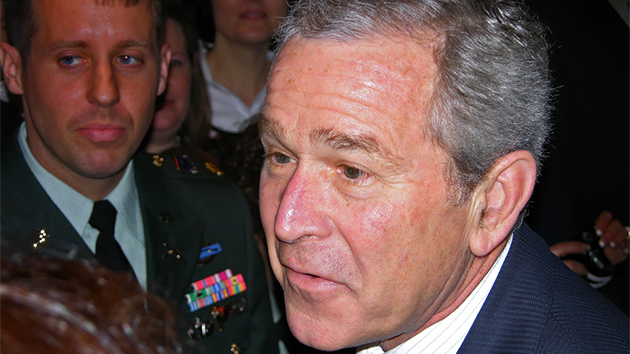 Why would hundreds of the leading minds in the fields of national security, intelligence, and information technology want to be lectured to by former President George W. Bush, who, after all, misused intelligence to launch a war with little preparation for what would come afterward? And why would the US division of one of the world’s largest software companies arrange—and perhaps pay—for Bush to address such an audience?

These are questions that this firm, SAP National Security Services, doesn’t want to answer.

Next month, SAP National Security Services—a subsidiary of SAP, the German-based software behemoth—will hold its fourth annual Solutions Summit, where Bush will be a keynote speaker and will take part in a Q&A with Frances Townsend, his onetime homeland security adviser. The event is titled, “Human Critical: Empowering People to Drive US Security.” The one-day session—which is cosponsored by Intel, Amazon, CACI, Deloitte, Hewlett-Packard, and other tech and security companies—will, according to its website, highlight several topics, including “closing the human vulnerability gap around cyber,” “empowering the analyst to exploit and integrate multi-source intelligence at the speed of the mission,” and “extending insight from the analyst workstation to the tactical edge via the cloud.”

Now what does Bush—whose White House nurtured a deep distrust of professional analysts within the intelligence community and at times discounted or dismissed their work—have to do with any of that?

Though the summit is open to the press, the Bush-Townsend chat will not be, according to Kristen Sanchez, director of marketing at SAP National Security Services, which also goes by the name SAP NS2. (According to its website, SAP NS2 offers “a full suite of world-class enterprise applications, analytics, database, cyber security, cloud, and mobile software solutions…with specialized levels of security and support to meet the unique mission requirements of US national security and critical infrastructure customers.”)

When I asked Sanchez why SAP NS2 would spotlight Bush and whether this German subsidiary was compensating the former president for his time, she was not too forthcoming. Here’s the exchange:

“Is President Bush being paid?”

“Because I prefer not to.”

“Why was President Bush invited?”

“That’s not any information I want to give out.”

“Do you tend to pay your speakers?”

I also asked Sanchez to characterize the purpose of the event, and she replied, “I’m not in a position to comment on this.” She suggested I send her an email to arrange another time to talk. I did—and never heard back from her.

Bush’s office would not comment on whether he is being paid for the appearance. A spokesman for Townsend, when asked if SAP NS2 is paying her to speak at the conference, emailed, “I would refer you to SAP on that question.”

Bush reportedly receives between $100,000 and $175,000 for speaking gigs, and recently he charged a hundred grand to appear at a charity fundraiser for American military vets wounded in Iraq and Afghanistan. As one regular attendee of the SAP NS2 conferences, who for professional reasons wishes not to be identified, observes, “The obvious irony is inviting George W. Bush to lecture us on how to keep the US safe, after presiding over the 9/11 failure and launching an unjustified war which has destroyed the lives of thousands of Americans and Iraqis, brought Al Qaeda to Iraq, created the situation for ISIS to be created, destroyed a country, cost the US [almost] $2 trillion and counting, and has made our country and the world less safe.”

It is unclear what Bush can or will contribute to the conversation at next month’s event. The previous SAP NS2 conferences have tended to be wonky, policy-drenched affairs. At the second annual summit two years ago, retired Army General Stan McChrystal, the former US commander in Afghanistan, discussed the challenge of large bureaucracies—say, the US military—adjusting to a world in which huge amounts of information move at the speed of light. (He also noted, “We didn’t understand Iraq at all, and we understood Afghanistan even less.”) Jason Matheny, then a program manager at the Intelligence Advanced Research Projects Activity of the Office of the Director of National Intelligence, spoke about a project called Open Source Indicators, in which researchers examine various data—web search queries, social media data, financial markets information—and use “machine learning approaches” to forecast a future event. And Victoria Romero, a senior scientist in the cognitive systems division at Charles River Analytics, talked about the possibility of analyzing gigantic piles of social media data to render predictions about the future behavior of groups and individuals. “What this new data source gives us,” she told the crowd, “is the ability to look at the thoughts of people around the world and understand the threats and fears that they talk about.” At last year’s summit, Robert Gates, the former secretary of defense, assailed the US government’s failure to devise an effective cybersecurity policy and railed against “privacy purists.”

These conferences do appear to have an obvious strategic intent: promote SAP products and services. Two years ago, Mark Testoni, the president of SAP NS2, in a report based on the summit, touted SAP software that develops “algorithms that look at data from various places and detect patterns that may point to some troubling trend. For example, we might combine sentiment analysis on Twitter with captured signals and information from blogs to detect an emerging threat.” At the 2014 summit, the 800 or so attendees were briefed on SAP NS2’s development of a secure cloud for the federal government, and the firm featured an assortment of products that it claimed “addressed US Government needs for real-time situational awareness; cyber security; counter terrorism; insider threat detection; critical infrastructure protection; open source analysis” and more.

Presumably, placing Bush on the bill will draw a bigger crowd of intel, CT, and IT professionals—from inside and outside government—and create a larger audience of potential customers for SAP NS2’s wares. The firm does say in promotional material that the focus of its fourth annual conference is the “men and women who power the US national security mission.” But is Bush only willing to help these men and women if he’s paid a hefty fee? That apparently is a secret.