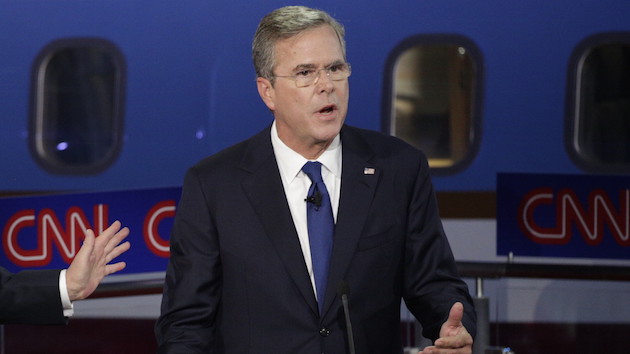 In between all the theatrics and back-and-forth of the second GOP presidential debate—Donald Trump and Carly Fiorina facing off about his  derogatory comment regarding her looks, Ben Carson declining to high-five Trump, Rand Paul calling Trump a junior high school bully—something interesting happened that few seemed to notice: Jeb Bush called for launching a cyber attack against China.

In the middle of the lengthy debate, CNN anchor Jake Tapper asked Paul, the senator from Kentucky, if he agreed with Wisconsin Governor Scott Walker’s demand that President Barack Obama cancel the state dinner for Chinese President Xi Jinping because of China’s currency manipulation and its alleged cyber assaults against the United States. Paul replied, “I don’t think we need to be rash, I don’t think we need to be reckless, and I think need to leave lines of communication open.” Walker stuck to his stance: “When it comes to China, why would we be giving an official state visit to a country that’s been involved in a massive cyber attack against the United States?”

Tapper then turned to Bush, the former governor of Florida, and asked, “Your father was the chief diplomatic envoy to China back when Nixon opened relations to China. Is Scott Walker’s approach the right one, canceling the state dinner?” Here’s what Bush said:

No, I don’t think so, but we need to be strong against China. We should use offensive tactics as it relates to cyber security, send a deterrent signal to China. There should be super sanctions in what President Obama has proposed. There’s many other tools that we have without canceling a dinner. That’s not going to change anything, but we can be much stronger as it relates to that. [Emphasis added.]

Offensive tactics—what does that mean? I asked a cybersecurity expert, who wishes not to be named, and this person noted that this terminology would generally imply cyber attacks aimed at knocking out Chinese networks and information systems. And Ralph Echemendia, a cybersecurity expert who goes by the handle the Ethical Hacker, said in an email that “to use the word offensive implies to attack the Chinese government.”

There is a fine line between the use of technology for intelligence gathering to make a strategic move and actually making a move. Without ‘legitimate’ proof of attacks by the Chinese, offensive actions could be considered by many as an offensive action on our part. State-sponsored cyber warfare has and will continue. However due to the nature of the digital domain, having proper proof of an attack’s source can be tricky. Misinformation is very simple to [spread] and even a teenager with some skills can create a geopolitical situation. Political leaders barely understand how to use their email, much less do they understand the issues surrounding the use of digital weaponry.

US spy agencies have mounted offensive cyber operations—secretly. Public knowledge of what this has entailed is extremely limited. But Bush appeared to be openly calling for a cyber blast on China to deter Beijing. (The unnamed cybersecurity expert quoted above notes, “There’s no reason that we need to respond to cyber with cyber. We could always respond in another way of our choosing.”) This was a bold—high-energy?—recommendation. Yet it drew no comment at the debate and not much afterward. And a Bush campaign spokesperson did not respond to a request for comment.

At the GOP debates, Trump is usually the contender talking tough about China. But with this remark, Bush out-hawked Trump. Yet he did so in a sideways manner not likely to win him points from GOP voters. The Chinese, though, probably took heed.