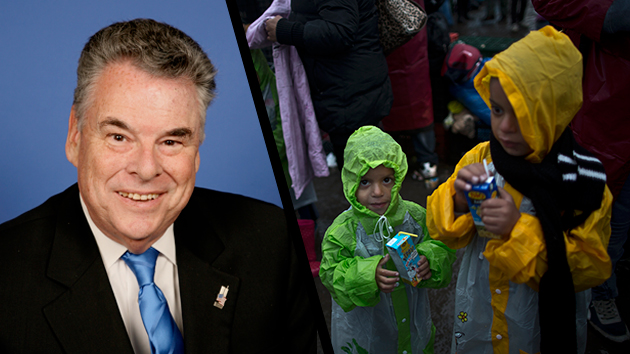 As my colleague Tim McDonnell reported earlier today, the Obama administration has announced that the United States will take in 10,000 Syrian refugees starting October 1, in what the White House described as a “significant scaling up” of the US commitment to the ongoing migrant crisis.

Cue the terrorism-conflating saber-rattling of one Congressman Peter King (R-N.Y.), who issued the following statement this afternoon:

There’s evidently much wrong with King’s statement, not least of all the fact that the Tsarnaev brothers who bombed Boston spent time growing up in the former Soviet republic of Kyrgyzstan, and were part of a family originally from war-torn Chechnya. Not Syria.

It also takes a long time for a Syrian refugee to apply for a coveted spot in the United States—precisely due to the fact that the United States is going to extraordinary lengths to prevent terrorists from slipping in, according to the Washington Post:

The United States has so far lagged far behind several European countries in this regard, largely due to the time-consuming screening procedure to block Islamist militants and criminals from entering the United States under the guise of being legitimate refugees.

As a result, it takes 18 to 24 months for the average Syrian asylum seeker to be investigated and granted refugee status. The process takes so long that the UNHCR takes biometric images of some applicants’ irises to ensure that when refugee status is eventually granted, it goes to the same person who applied.

King hasn’t been the only politician warning of an increased terror threat if the United States allows more Syrians into the country. But fellow Republican Marco Rubio struck a less incendiary tone this week. “We would be potentially open to the relocation of some of these individuals at some point in time to the United States,” he said, according to CNN, but added that, “We’d always be concerned that within the overwhelming number of the people seeking refugee [status], someone with a terrorist background could also sneak in.”

According to an investigation by Mother Jones in 2011, Rep. King might possess one of the most hawkish voices in Washington, but his record on terror has raised some eyebrows. King was one of the nation’s most outspoken supporters of the Irish Republican Army and a prolific fundraiser for the Irish Northern Aid Committee (NorAid), allegedly the IRA’s American fundraising arm. (King’s office didn’t respond to a request for comment on that article.) You can read Tim Murphy’s fascinating report here.

King had previously told the Daily News, “Obviously, we have to take refugees… But we have to be extremely diligent, very careful.”