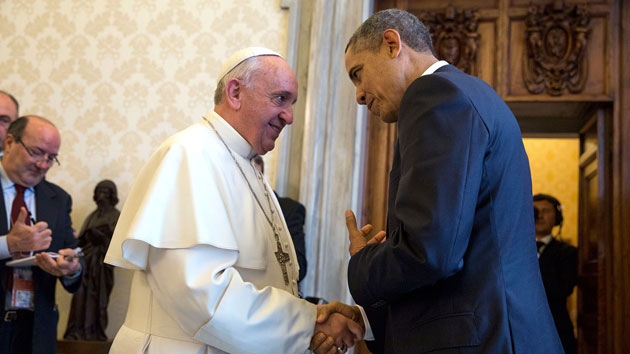 As expected, Pope Francis implored Congress to protect refugees and other migrants in an address at the Capitol on Thursday. But before he did, he took a step to acknowledge the nation’s (and the church’s) often horrific treatment of American Indians. America, he argued, should demonstrate a sense of compassion it so rarely showed during the colonization of the continent:

In recent centuries, millions of people came to this land to pursue their dream of building a future in freedom. We, the people of this continent, are not fearful of foreigners, because most of us were once foreigners. I say this to you as the son of immigrants, knowing that so many of you are also descended from immigrants. Tragically, the rights of those who were here long before us were not always respected. For those peoples and their nations, from the heart of American democracy, I wish to reaffirm my highest esteem and appreciation. Those first contacts were often turbulent and violent, but it is difficult to judge the past by the criteria of the present. Nonetheless, when the stranger in our midst appeals to us, we must not repeat the sins and the errors of the past. We must resolve now to live as nobly and as justly as possible, as we educate new generations not to turn their back on our “neighbors” and everything around us. Building a nation calls us to recognize that we must constantly relate to others, rejecting a mindset of hostility in order to adopt one of reciprocal subsidiarity, in a constant effort to do our best. I am confident that we can do this.

This language is particularly significant because of what the Pope was up to yesterday—at a service at Catholic University, he formally canonized Junipero Serra, an 18th-century Spanish missionary who played an important role in the conversion of American Indians to Catholicism in California. Serra wasn’t by any stretch the worst European to visit the New World (the bar is very high), but the missions of California were deadly places for American Indians, cursed with high mortality rates (from disease and abuse) and forced labor. The core purpose of Serra’s work was to purge the region of its native culture and install the church in its place. For this reason, some American Indian activists were fiercely opposed to the canonization; Francis didn’t meet with any of them until yesterday afternoon—after he’d made it official. Consider Thursday’s allusion to past transgressions something of an olive branch.