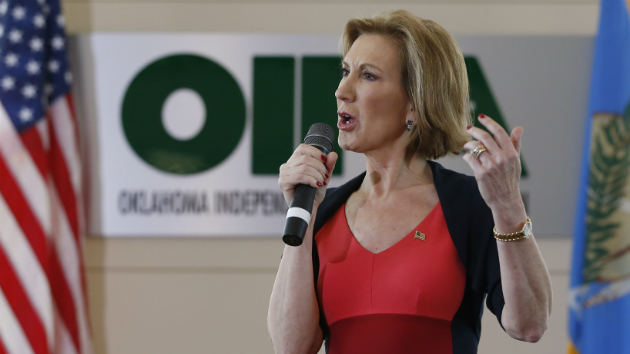 At campaign events, Carly Fiorina likes to hook a crowd with a big number—really wow the audience with a fact that will blow them away. As Fiorina campaigned through Iowa recently, she had one figure she kept plugging: 307,000.

Fiorina said this is the number of veterans who died last year because of President Barack Obama’s supposedly inept management of the Department of Veterans Affairs. The performance of the VA is a serious subject, and for several years there has been substantial criticism that the agency has mistreated or failed to treat vets. But in Fiorina’s telling, the problems at the VA were more horrific than commonly depicted.

“I could tell you about the 307,000 veterans who died before they ever got health care last year—no consequences!” Fiorina exclaimed before a rapt audience in Monticello in the very easternmost part of the state (not far from where Field of Dreams was filmed).

It’s a shocking statistic. But it’s not true. The VA’s inspector general issued a report noting that as of September 2014, the VA had a list of more than 867,000 vets who had applied for medical services, and the report noted that at least 307,000 of those veterans had died since making an application. But this was not in one year. And of those who passed away, according to the report, at least 84 percent had died more than four years earlier. Plus, there was no finding that the cause of death in these cases was related to a lack of access to health care. In fact, the report found that because of shoddy bookkeeping, the backlog was a huge overstatement of the number of actual pending applications and “did not necessarily represent veterans actively seeking enrollment in VA health care.”

In other words, the inspector general uncovered a lot of problems with the VA system, but he did not find that 307,000 veterans died before they obtained health care. And 307,000 definitely did not die in a single year.

Perhaps Fiorina’s reference to 307,000 dead vets was a slip of the tongue. But she has repeatedly used this figure—even after being called out for making a false accusation. In a debate appearance in September, Fiorina said something similar: “Three hundred and seven thousand veterans have died waiting for health care.” That statement was viewed skeptically by fact-checkers. Still, she has kept tossing out this figure in an authoritative manner.

Sarah Isgur Flores, Fiorina’s deputy campaign manager, defended the use of the number, while sidestepping the way Fiorina has actually deployed it.

“As of September 2014, more than 307,000 pending…records, or about 35 percent of all pending records, were for individuals reported as deceased by the Social Security Administration,” she wrote in an email. “This means that 307,000 died while on the waiting list. I’m sure the VA and others who want to defend the current system will try to parse the meaning—but the fact is undisputed.”

Fiorina is not the first politician to indulge in truthiness, but her remarks this campaign season in particular have been a fact-checking bonanza. Most notably, a few weeks ago she got caught making wildly inaccurate statements about Planned Parenthood. And since then, at least judging from her recent swing through Iowa, she has demonstrated a knack for relying on false claims. Fiorina delivers a polished stump speech and calmly catches questions from the audience, never once showing any hesitation in reeling off fact after fact, number after number. Yet many of those facts or numbers are not as solid as Fiorina insists.

Speaking in Monticello, Fiorina moved on from the 307,000 veterans “fact” to another example of government bureaucracy run amok. “I could tell you about the 73,000-page tax code, which is crushing in its complexity,” Fiorina declared.

A 73,000-page tax code does sound pretty complex, but the tax code is not 73,000 pages long. The 73,000-page estimate comes from the Tax Foundation, a conservative think tank. Yet even the Tax Foundation admitted (after being criticized by Slate) that the actual tax code—the compilation of tax laws—is only 2,652 pages. If you add up all the tax laws and regulations, the tax code is 9,000 pages. And if you compile the tax law and regulations and citations, including relevant cases and other information, then the size of the tax code does swell to around 73,000 pages. But, as Slate pointed out, this seems like overkill: “Calling it the tax code is like calling the Constitution the length of the collected Supreme Court cases on constitutional law—or like calling the alphabet the length of the dictionary.”

Flores, Fiorina’s spokeswoman, said the fact that there are multiple interpretations proves the point. “Maybe it should tell us something that nobody can even agree on how long the tax code is?” she wrote, pointing to other media outlets that had used the 73,000 number.

Numbers like these make up much of Fiorina’s stump speech. In two recent speeches in Iowa, Fiorina told the crowd, in a Bernie Sandersesque turn, that one reason why she was running for president was that 75 percent of Americans believe the federal government is corrupt. In Monticello, she used this number to build a rapid-fire rant against the feds:

And if you think those are harsh words, let me assure you the vast majority of Americans agree with what I just said, and maybe you do too. Gallup has taken a survey, and for two decades they have asked the question, do you think the federal government is corrupt? Today 75 percent of the American people think the federal government has become corrupt. Corrupt in what way? Corrupt they pick the winners and losers, corrupt that it’s easy for the wealthy, the big, and the powerful, and the small and the powerless are getting crushed.

Talking to the Iowans of Monticello, Fiorina discussed another purported federal government overreach: The Dodd-Frank financial reform bill, passed in 2010 in response to the systemic failures that allowed the 2008 economic crash. “And so a new law got passed,” she said. “It was called Dodd-Frank, and it was supposed to fix everything, right? And Dodd-Frank, by the way, hmm, what a shock, was written by the Wall Street banks, and 10 Wall Street banks became five, even bigger, more powerful Wall Street banks.” Not really. Fiorina was ignoring the fact that Dodd-Frank was heavily watered down under heavy lobbying by Wall Street and remains widely loathed by Big Finance

Fiorina was not correct. The FDIC, which regulates banks, said in 2010 that there were 6,914 community banks, and that in the first quarter of this year there were 5,881. That’s a decline of 1,033 banks, not 1,700. More important, the American Banker recently reported that community banks have been closing for decades, and “there appear to be a number of interrelated factors hitting the industry, with Dodd-Frank being one among many.”

Asked about the 1,700 figure, Flores said the campaign used a different metric to define a community bank—it counted banks with less than $10 billion in assets (which is not the FDIC’s definition). By the campaign’s calculation, there are 1,590 fewer banks, Flores said, pointing to a report from the conservative Mercatus Center.

“Given there has been some reporting that this trend has continued, the number is probably over 1,600 now,” she noted. She also pointed out that Fiorina was speaking extemporaneously, without prepared notes.

Moving on to another complaint about the federal government, Fiorina proclaimed in Monticello, “We should pause for a moment and think about how complicated government has really become. Every department has gotten bigger every year for 50 years. Despite all of our talk about limited government, reducing debt and deficit, we’ve never done it.”

The Washington Post debunked this claim on June 1. The Post fact-checker thought that Fiorina’s assertion that every government department has become bigger every year for half a century deserved the paper’s top rating for inaccuracy, but he took pity on the Fiorina campaign:

There are many ways to slice Fiorina’s statement. But whichever way you interpret her wording, Fiorina is off base. The language is misleading to the average member of the public—and it even took her staff several times to clarify. As phrased, her statement is worthy of Four Pinocchios. However, we are giving her staff the benefit of the doubt, and will award Three.

And 20 seconds after wrongly declaring that every federal agency has expanded, Fiorina in Monticello repeated another false claim: “When was the last time we rolled back a single regulation? I don’t know! Ronald Reagan, maybe? Somebody in Iowa remind me, Ronald Reagan got rid of the the 55 mph national speed limit, he deregulated trucking and the airlines, that’s the last time it happened.” Actually, no. The Washington Post (again) and others noted last spring that this observation was inaccurate, pointing out that in 2012, Obama repealed gas station regulations.

Once again, Fiorina was sticking with an assertion that had been debunked. But that didn’t stop her.

Flores said the questions about Fiorina’s truthfulness are a symptom of the problem Fiorina is trying to solve.

“I understand that liberals want to disagree with Carly’s premise—that the system is broken and corrupt,” she said. “So I’m not surprised that they try to pick apart her statements whenever they get the chance. It’s certainly a lot easier to speak like a politician in poll-tested generalities from a teleprompter. It’s what politicians do and it’s why Americans are ready to elect someone from outside the political class.”

As a presidential candidate, Fiorina is selling herself as a no-nonsense former CEO who could manage and lead the federal government efficiently and effectively. Yet while she campaigns, she leaves behind a long trail of false assertions—enough so that voters ought to wonder about anything she says regarding her own qualifications.