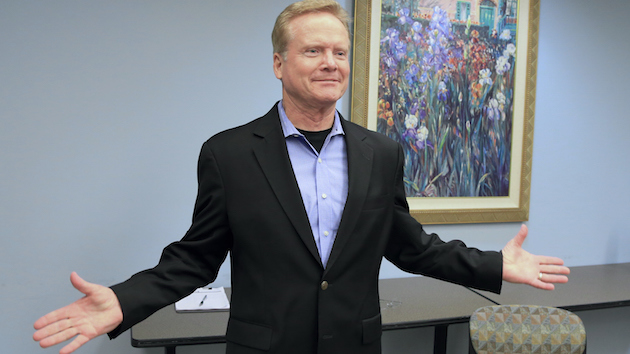 Is Jim Webb actually running for president? I don’t even know—and it’s my job to.

I mean that literally: I’m covering the Webb campaign for Mother Jones. And on Monday, my editor wanted to know what was up with the former Virginia senator who’s vying, however quietly, for the Democratic nomination. He pops up in the news when he does interviews or attends an event—or when he’s accused of nearly beating a man to death as an Annapolis midshipman—but it’s sometimes hard to know he’s still out there if you don’t follow his Twitter feed. That feed, by the way, has just under 14,500 followers, fewer than the nearly 20,000 who follow former Rhode Island Gov. Lincoln Chafee, who’s even more under the radar as a Democratic hopeful. (To be fair, Webb beats Chafee on Facebook.)

Webb has occasionally been on the trail in Iowa, but almost always at large events like the Iowa State Fair or last week’s Rural Town Hall in Des Moines. He’s only shown up once in New Hampshire, according to Raymond Buckley, the chairman of the state’s Democratic Party, who also says he’s heard no mention of Webb’s campaign from potential primary voters. “The crickets here in New Hampshire are louder than the Webb campaign,” Buckley told Mother Jones. As for his finances, the issue that already forced Wisconsin Gov. Scott Walker and former Texas Gov. Rick Perry to drop out of the race, no one yet knows how they look. Webb formally announced his candidacy in early July, so he didn’t have to file a disclosure with the Federal Election Commission until last week. We should know in a few days how much cash Webb has raised, but, having rejected using a super-PAC, his war chest is likely to be modest.

With all that in mind, I emailed Craig Crawford, Webb’s communications director, to ask about the campaign. I wanted to see how many staffers or key volunteers Webb had signed up, particularly in Iowa and New Hampshire, where serious candidates need strong ground organizations. Silence. I tried again on Wednesday. Silence. Calls to Webb’s campaign headquarters (listed as a post office box) brought me to three different voicemail boxes, and a message wasn’t returned.

While I didn’t get to talk to Crawford, he told the Washington Post in May that Webb’s campaign has about a dozen paid staffers and volunteers. Then, in August, he told the Boston Globe that Webb was adding three more people to his staff. Two of them, Iowa director Joe Stanley and social media and veterans’ coordinator Joe Chenelly, didn’t respond to messages through their publicly available email addresses. Anastasia Apa, who supposedly raises money for Webb, referred me back to Crawford.

I did finally manage to exchange emails with Dave “Mudcat” Saunders, a longtime Webb adviser who worked on his 2006 Senate campaign. Saunders described himself as a “friend and supporter” of Webb’s, but said he had no official role on the campaign.

“I am not an official spokesperson for Jim,” he wrote. There seems to be a lot of that going around in Webb’s world.

But Webb will still be on stage at the Democratic debate next Tuesday, and there’s no Republican-style kids’ table to separate him from the front-runners. He argues his direct, no-BS style is what most Americans want, and the debate will be the first chance for almost everyone in the country to hear it. Whether that equates to a real campaign is a different question.