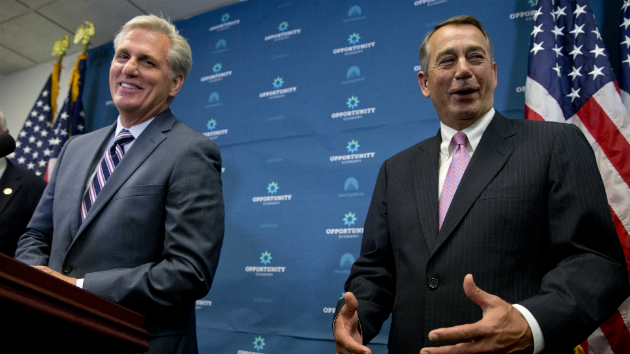 In the wake of John Boehner’s surprise resignation last week, House Majority Leader Kevin McCarthy (R-Calif.) is the top contender for the speakership. But McCarthy seems unlikely to fare better with the rabble-rousing band of House GOP conservatives that made a mess of Boehner’s leadership at every turn. Why? It comes down to leverage—or rather the lack of it. Traditionally, party leaders have brought their rank-and-file to heel by doling out or withholding campaign cash and earmarks. Boehner banned earmarks, but he did have a huge war chest, filled mostly by corporate political action committees, to lord over his caucus. So does McCarthy. But Boehner didn’t—or couldn’t—buy influence with the tea party insurgents who dubbed themselves the Freedom Caucus. And McCarthy may have the same problem.

Boehner raised tens of millions of dollars over the years, and he plowed much of it into strengthening his party—channeling campaign cash to the National Republican Congressional Committee and contributing directly to hundreds of GOP lawmakers and candidates. In 2014 alone, Boehner’s leadership PAC, which supports other candidates, gave out more than $1.2 million to 181 GOP House candidates. But not a dime flowed to any of the nine founding members of the Freedom Caucus. While other factors came into play in Boehner’s downfall, that lack of a financial connection between the leadership and members of the extremist faction limited Boehner’s ability to rein them in.

Like Boehner, McCarthy is a prodigious fundraiser. So far in the 2016 election cycle, McCarthy’s campaign has raised $2.5 million and his leadership PAC has brought in another $1.3 million. And like Boehner, McCarthy has already given away large amounts this year—more than $500,000 in the first seven months to 64 fellow House members. But he’s contributed nothing to those nine founders of the Freedom Caucus—Reps. Justin Amash (Mich.), Ron DeSeantis (Fla.), John Fleming (La.), Scott Garrett (N.J.), Jim Jordan (Ohio), Raul Labrador (Idaho), Mark Meadows (N.C.), Mick Mulvaney (S.C.), and Matt Salmon (Ariz.). And of the 30 other House members who identify as members of this group, only two have received money from McCarthy’s PAC—a combined $10,000.

As McCarthy works to build support for the House GOP’s top job—and fends off a challenge from Utah’s Jason Chaffetz, a tea party favorite—part of his pitch to his colleagues is a promise that he will have better relations with his party’s insurgent wing. If he pulls that off, it won’t be because he has any more power over them than Boehner did.