World leaders have a pretty comprehensive plan to fight climate change, according to a United Nations report released Friday—even if it doesn’t go as far as many of them had hoped.

In just over a month, representatives from most of the countries on Earth will gather in Paris in an attempt to finalize an international agreement to limit global warming and adapt to its impacts. The video above is a snappy explainer of what’s at stake at this meeting, but suffice it to say the proposed deal is split into two keys parts. First is the core agreement, parts of which may be legally binding, that comprises broad, non-specific guidelines for all countries. It calls on countries to take steps such as transparently reporting greenhouse gas emissions and committing to ramp up climate action over the next few decades.

But the real meat-and-potatoes is in the second part, the “intended nationally determined contributions” (INDCs). The INDCs are what sets the Paris talks apart from past attempts at a global climate agreement in Kyoto in 1997 and Copenhagen in 2009. Those summits either left out major polluters (the US dropped out of the Kyoto Protocol; China and India were exempted) or fell apart completely (Copenhagen), in large part because they were built around universal greenhouse gas reduction targets that not everyone could agree to.

The UN process is like a potluck, where each country brings its own unique contribution based on its needs and abilities.

This time around, the UN process is more like a potluck, where each country brings its own unique contribution based on its needs and abilities; those are the INDCs. The US, for example, has committed to reduce its greenhouse gas emissions 26 to 28 percent below 2005 levels by 2025, mostly by going after carbon dioxide emissions from coal-fired power plants. So far, according to the World Resources Institute, 126 plans have been submitted, covering about 86 percent of the world’s greenhouse gas emissions. (The European Union submitted one joint plan for all its members.) Those contributions are likely to limit global warming to around 2.7 degrees Celsius (4.9 degrees Fahrenheit) above preindustrial levels by 2100. That’s above the 2 degrees C (3.6 degrees F) limit scientists say is necessary to avert the worst impacts—but it’s also about 1 degree C less warming than would happen if the world continued on its present course.

Now, we have a bit more insight into how countries are planning to make this happen. The United Nations Framework Convention on Climate Change (UNFCCC), the group that is overseeing the Paris talks, combed through all the INDCs to look for trends. Its report is a bit convoluted and repetitive; I don’t recommend it to any but the nerdiest climate nerds. But I pulled out a few of the charts as an overview of what global action on climate change really looks like.

Types of targets: Most of the INDCs contain specific emission reduction targets. (Not all do; some countries, such as the small island nations, have such small or nonexistent emissions that it wouldn’t make sense to promise to reduce them.) The most common way to state these targets is to promise that emissions at X future date will be lower than they would be with no action. Indonesia, for example, has pledged to increase its emissions over the next 25 years by 29 percent less than it would have under a “business as usual” scenario. The US commitment fits in the second category, an “absolute” target where emissions actually begin to go down. Others specify a date at which emissions will “peak,” or set a goal for emissions per unit of GDP or energy production (“intensity”). 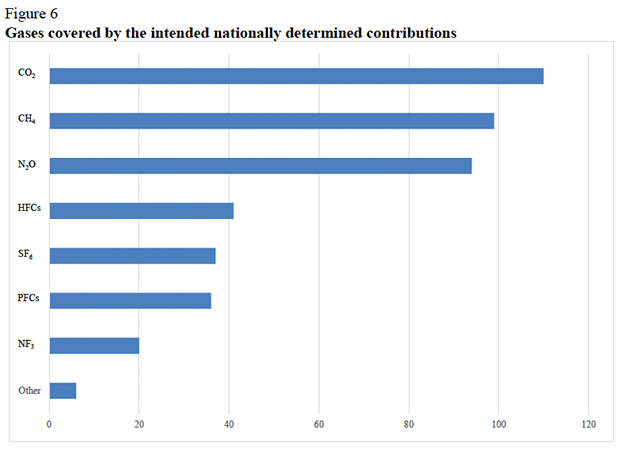 Economic sectors: In different countries, different economic sectors are more or less responsible for climate pollution. In the US, the number-one source of emissions is coal-fired power plants; thus, President Barack Obama’s plans focus on the power sector. In Indonesia, by contrast, deforestation is the biggest problem. Most plans cover more than one sector, but the most common is energy. 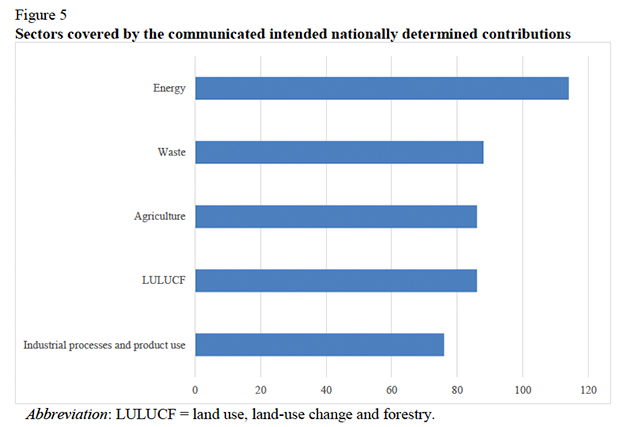 How to fix it: This section finds that implementing renewable energy is the most common way countries are planning to meet their targets. More interesting is the tiny role played by carbon capture, use, and storage, down at the bottom of the chart. This refers to technology that “captures” greenhouse gas emissions on their way out of power plants, or directly from the atmosphere, and buries or re-purposes them. Support for carbon capture—also known as “clean coal”—is popular with policymakers who don’t want to curb coal use (including GOP presidential contender John Kasich), even though it remains costly and unproven at scale. 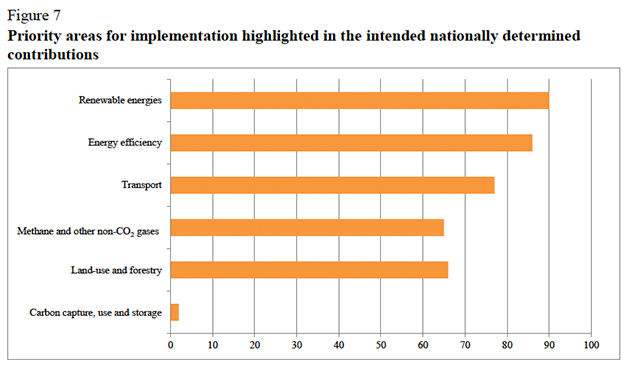 How to adapt: Many countries’ INDCs also contain information about how they plan to adapt to climate change. Water use, agriculture, and public health appear to be the biggest areas of focus. 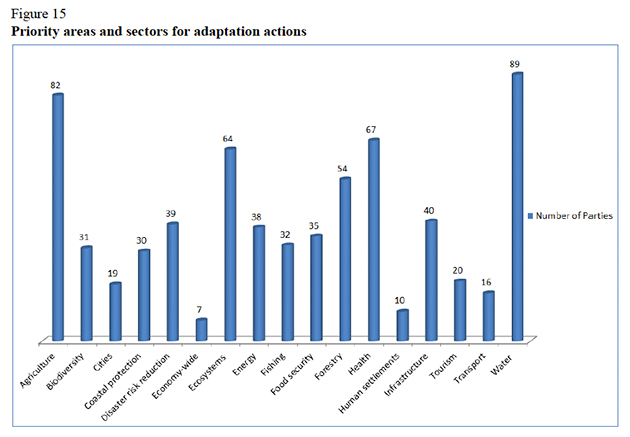 A terrible, no-good, very bad summary: The most important question is clearly how all this adds up to reducing the world’s greenhouse gas footprint and averting the worst threats posed by climate change. But the chart that addresses this question (below) is…not great. I’m including it so you have some sense of one big drawback of the Paris approach—without universal emissions targets, it’s a lot harder to specify what the cumulative effect of these plans will really be. In short, here’s what this chart shows: The gray line is global greenhouse gas emissions up to today. The orange line is how emissions will grow over the next couple decades if we do nothing. The three blue lines show how quickly we would need to reduce emissions to keep global warming to 2 degrees C; the longer we wait to take action, the steeper the cuts have to be. The yellow rectangles show a snapshot of where the INDCs leave us. 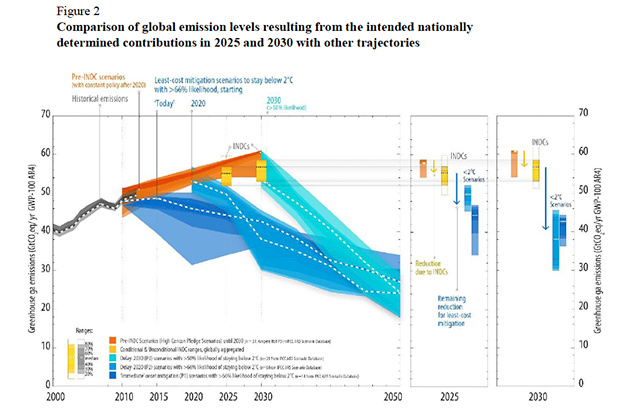 So, we’re better off than before, but we’re not out of danger. That’s why it’s essential for the core agreement to include requirements that countries adopt even more aggressive goals in the future; that’s one of the key things that will be debated in Paris. In other words, the Paris meeting is just one key battle in a war that’s far from over, Jennifer Morgan, director of the WRI’s global climate program, said in a statement.

“Despite the unprecedented level of effort, this report finds that current commitments are not yet sufficient to meet what the world needs. Countries must accelerate their efforts after the Paris summit in order to stave off climate change. The global climate agreement should include a clear mandate for countries to ramp up their commitments and set a long-term signal to phase out emissions as soon as possible.”