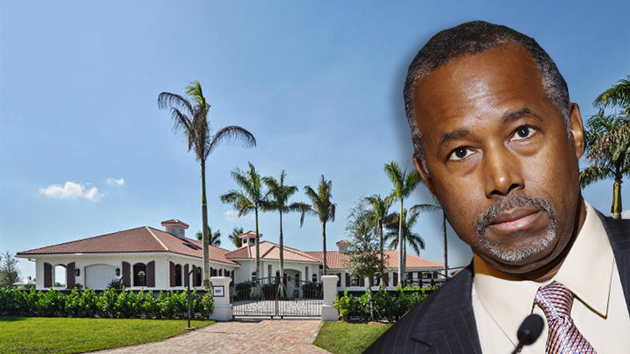 Last week, Mother Jones and the Associated Press reported that GOP front-runner Ben Carson had a business relationship with a felonious ex-dentist in Pittsburgh named Alfonso Costa, who had once been convicted of healthcare fraud. Carson made between $200,000 to $2 million last year on a real estate investment linked to Costa, whom Carson has often described as his best friend. When these stories appeared, Carson said he stood by Costa, but he declined to say much else. A further examination of Carson’s financial disclosure form and public records indicates that the retired neurosurgeon has another lucrative real estate investment that may be associated with Costa. But the disclosure statement doesn’t provide all the required information about this asset, and the Carson campaign refused to answer questions about this property.

On the disclosure form, Carson lists a plot of land in West Palm Beach worth $1 to $5 million. He describes the property as “CPC Grand Prix South Lot.” Yet there are no Palm Beach County real estate records that show Carson’s ownership of this lot.

Local real estate records note that Carson does own property in the area, but only his personal residence, which is on a golf course in West Palm Beach and was purchased for $775,000 in 2013. If Carson owns any other real estate in Palm Beach County—such as this CPC Grand Prix South Lot—he must hold it via an investment vehicle. Yet neither of the shell corporations that Carson and his wife list on his disclosure—corporations through which they invested in a Pittsburgh real estate deal connected to Costa—own property in Palm Beach County. So how does Carson own the Palm Beach property he lists on the disclosure form?

The description of the property is another mystery. There are no legal entities or corporations called “CPC Grand Prix South Lot” in Florida. There is a sub-development on record with the Palm Beach County property appraiser called Grand Prix Village South. It includes 15 lots, all of which were empty two years ago but are now under rapid development as part of a fast-growing “equestrian community,” which consists of mega-sized homes and horse stables with Olympic-class riding facilities. Palm Beach County real estate records show that Alfonso Costa’s real estate company, Costa Land Company, purchased one of the Grand Prix Village South lots in March 2014 for $2.8 million. Is this connected to Carson’s disclosed real estate investment?

The Carson campaign has refused to clear up this puzzle. Was the valuable parcel listed on Carson’s form bought by Costa? Who truly owns this piece of land? Why are there no real estate records backing up Carson’s disclosure?

“We are not offering up the detail you have requested,” says Doug Watts, Carson’s spokesman. “Our [personal financial disclosure] stands.” Costa did not respond to requests for comment.

The Office of Government Ethics, which oversees the financial disclosure forms that presidential candidates must file, is clear about what must be included on these records. If a candidate directly owns real estate, the type of real estate and its location must be revealed. If the candidate owns a business or shell corporation that holds the real estate, “the business name, type, and location must be indicated,” according to the OGE rules.

Watts did say that the campaign would consult its attorney to determine whether additional clarification is necessary.

The Carson campaign won’t talk about his “CPC Grand Prix South Lot,” but the Costa Land Company’s website does detail the plot of land it owns in the development. This parcel has been developed and dubbed “Ravello-An Equestrian Estate,” and it is now for sale. According to a listing with Sotheby’s, the 3.5 acre property now has a 22-stall horse barn, with three paddocks, a full-size riding ring, a brick driveway, and two laundry rooms. The asking price: $10 million.

Here’s a promotional video for the property:

Carson also has one other mysterious listing on his personal financial disclosure form: rental income from “Quiet Valley Farm.” No location information was provided for this investment, and Carson’s spokesman would not clarify what the property was, who owned it, or where it was. The value of this property was between $100,000 and $250,000.