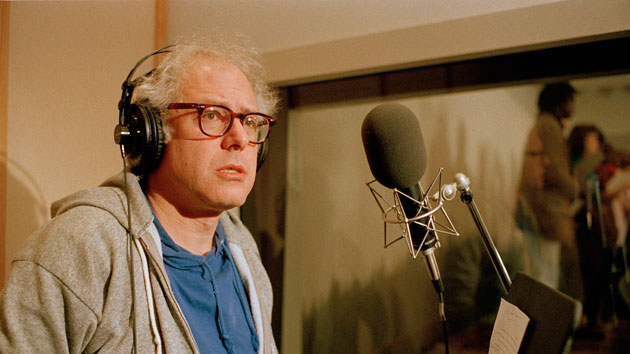 After he was elected mayor of Burlington, Vermont, in 1981, Bernie Sanders took his message straight to the people via a cable access show called Bernie Speaks. It was a low-budget production. The credits were written in marker by hand; the intro music was a recording of “We Shall Overcome”; there was no script. Now, the station has posted dozens of episodes of Sanders’ show, along with poorly lit footage of various mayoral functions and campaign events. The collection captures Sanders at his most unfiltered—and, at times, eccentric. Here’s a sampling. (All clips courtesy of the CCTV  Center for Media & Democracy in Burlington, Vermont.)

Bernie Goes to the Dump

Featuring a big pile of wood chips, a flock of sea gulls, a really strong sweater, and some cows. This episode is what it sounds like.

This video has no narration. It’s just an hour of people playing sports around Burlington, with ambient crowd noise and grunting in the background. At around the 37:50 mark, the cameraman pans away from a soccer game to show the mayor holding court behind him. Why? Why not.

Bernie Performs “Do Not Go Gentle Into That Good Night”

At this 1985 event, hosted for Sanders by a group of writers and poets, Sanders spoke briefly about the coming election and city hall life. But mostly, he was there to talk about emotional energy. People had become “emotionally constipated,” he said, and, channeling his earlier writings on Sigmund Freud, Sanders argued that it was driving mankind into a death spiral—”Maybe there is a strong feeling to see the world blown up because the suffering in some ways is too intense.”

And then, he announced, he was going to read a poem—”Do Not Go Gentle Into That Good Night,” by Dylan Thomas. His older brother had bought A Child’s Christmas in Wales on vinyl years earlier, and it had stuck with the mayor ever since. “It’s very moving,” Sanders said. “It’s human beings rebelling, in a sense. Standing up. Fighting death. Fighting the elements whatever it may be.”

Sanders considered US involvement in Nicaragua a potentially greater catastrophe than the Vietnam war. In 1985, midway through his eight-year stint as mayor, he traveled to Central America to meet with members of the Sandinista-controlled government. He was greeted, on his return, by a crowd of supporters at the airport, and he delivered brief remarks on what he saw during his one-man diplomatic mission. “Their leadership are intelligent people—they’re not, to quote Ronald Reagan, ‘loony-tune characters,'” he said.

“This is the first time I’ve been to Central America, but Central America is America,” he concluded. “They are Americans. They play baseball. They play basketball, they watch the same stupid American television programs that we watch—you feel a real kinship for these people,” he said. (He spoke at greater length the next day.) 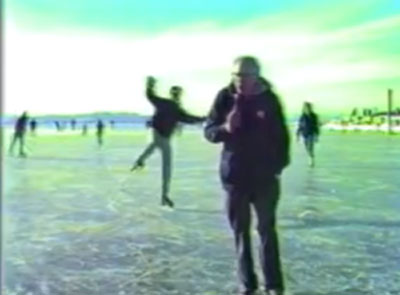 Sanders, you may have heard, does not enjoy the personal aspects of retail politics, such as shaking hands and kissing babies. But he does his best. As mayor, he often took his television show on the road to meet with constituents and sell them on his plans for the city. Ahead of a major vote on a new bond initiative in 1987, he decided to mingle among the ice-skaters on Burlington’s lakefront, making forced small talk and then giving them the hard sell. During lulls in the action, he sighs loudly, as if he is getting cold.

Although Sanders is not wearing ice skates, we do briefly see him playing hockey. When the puck comes toward him, he kicks wildly at it. Afterwards, he appears to talk trash. 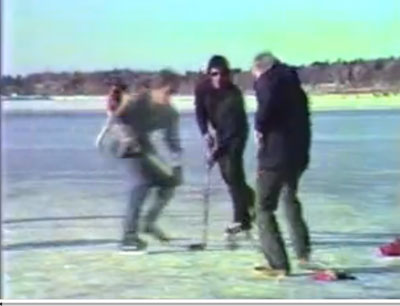 One woman refers to Sanders as “the King Friday of Burlington,” a reference to this character from Mr. Rogers.

I’ll let this description of his 1987 recording session stand on its own:

Sanders Records 2 Songs, and Talks with 30 Vt. Musicians at Todd Lockwoods’ White Crow Audio studio. Only “Oh Freedom” was edited. “We Shall Overcome” was not edited, as video. Lots of awful scratches from bad machine.

Bernie Talks About Almost Throwing Up During a Presidential Debate

Throughout his career, Sanders has mostly avoided talking about one subject—himself. But in 1986, he accepted an invitation to speak to a political science class at the University of Vermont. The topic was the 1960s, and Sanders, who had effectively majored in activism at the University of Chicago, spoke at length about his formative years as a civil rights activist and anti-war demonstrator.

Early on, he zeroed in on the moment when he realized his own political views had no place in the two-party system:

I remember, for some reason or another, being very excited when Fidel Castro made the revolution in Cuba. I was a kid and I remember reading that and it just seemed right and appropriate that poor people were rising up against rather ugly rich people. And I remember again very distinctly, again a very distinct feeling, I was watching the debates you remember the famous Nixon–Kennedy debates. That was the first time the presidential candidates actually debated. And I was becoming increasingly interested in politics, didn’t know much, but I was interested. I remember sitting in the student lounge in our dormitory watching the debate.

And at that time, I was very excited and impressed by the Cuban revolution, and there was Kennedy and Nixon talking about which particular method they should use about destroying revolution. I remember the irony as we learned the history later on, Kennedy was saying Nixon was too soft on communism…in Cuba. We should deal firmly with Fidel Castro! And Nixon was playing the role of hey, you’ve got to be patient you’ve got to negotiate, but of course what he was upset about was they were planning the Bay of Pigs Invasion right then. But for security reasons he couldn’t come out and say we are already planning the destruction of the Cuban revolution don’t worry about it. So he was the liberal and Kennedy was playing the conservative. Actually, when you read novels people say there’s a sick feeling in your stomach. Usually I’m sufficiently unemotional not to be sick but I actually left the room because I was about to puke. 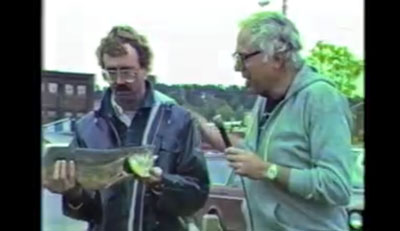 In this episode of Bernie Speaks, Mayor Sanders travels to the Burlington pier and encounters a man holding a large fish. The man explains that he’s involved a contest—whoever catches the largest fish in Lake Champlain will win a $100,000 savings bond. Sanders appears to briefly reconsider a career change. Fade to black. Next, we open on Bernie at a Burlington hotspot known as Battery Park. 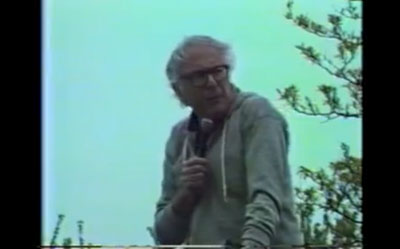 The camera slowly zooms out to reveal that Bernie is standing on top of a slide. 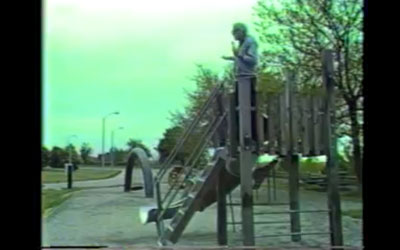 Why is he on a slide? What is he doing up there??

Unfortunately, despite Sanders’ success at cleaning the park up for the use of all citizens of Burlington, there is only one other adult at the park, and he is pushing his young daughter on a swing set. The mayor, undeterred, proceeds to interview him: 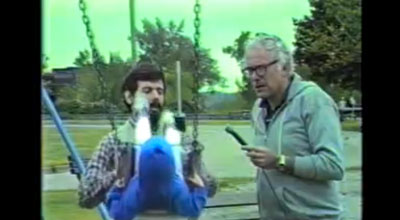 Sanders’ interviewing style is to constantly look around as if he’s expecting the cops to arrive and haul him away. Later, he meets a group of children painting a map of Vermont on the pavement outside an elementary school.

In keeping with his theme of stereotypically leftist fundraisers, Sanders invited the local access channel to film a fundraiser at a Burlington wine tasting. Sanders asks just one question at the event—do they have any wines that would appeal to people, like himself, who only drink $3 bottles? This is a tough one to watch, because there’s virtually no audio, and the cameraman appears to be standing on an active fault line.

Normally Bernie held his own microphone. But in December 1987 he was in luck—his oldest son, Levi, was home from college. So Levi held his microphone. For 40 minutes. In addition to looking tired, Levi also looks really cold.

They start outside the offices of the Burlington Free-Press, which Sanders offers up as a more benign but still unseemly example of corporate media. He appears surprised by just how expensive it is. “Oh God, it’s a dolluh and a quarter, he says.” 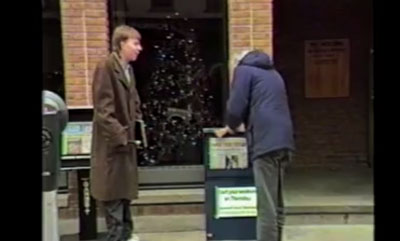 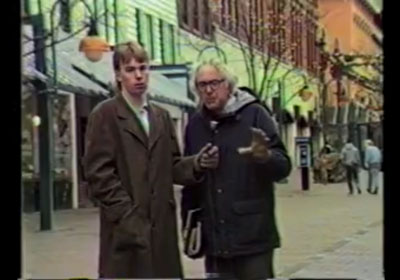 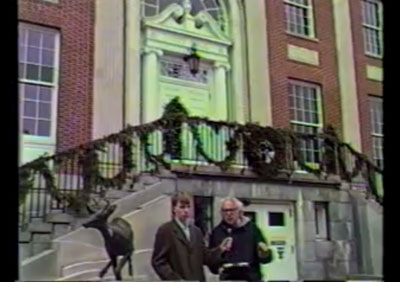 At the University of Vermont: 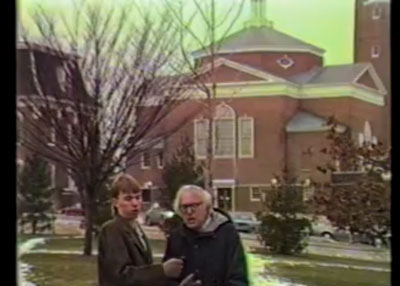 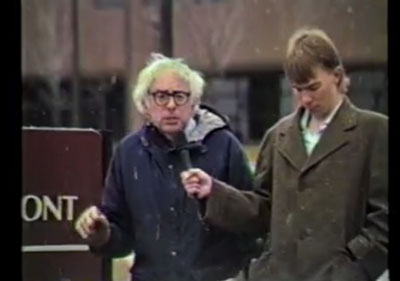 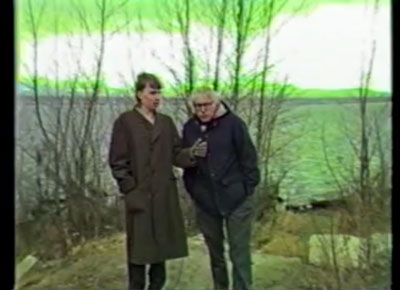 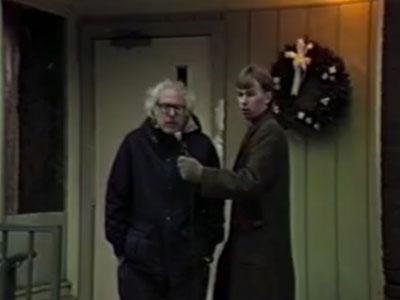