Christmas isn’t just a time to fantasize about going Zero Dark Thirty on a bunch of elves—it’s also a chance to show your friends and family how much you care about them by spoiling them with gifts. The problem is that you’re bad at it. You either get them something they’ll forget about and leave in a closet somewhere for years, only to rediscover it later in life when they’re finally moving out of that run-down apartment and getting a place in the burbs. Or it’s something they’ll mindlessly fold into their daily lives, as if an immersion blender was just something they always had. But not this year. This year you’re getting them something they can’t return. Something that will scar them permanently. You’re getting them some weird political swag you saw on Etsy. 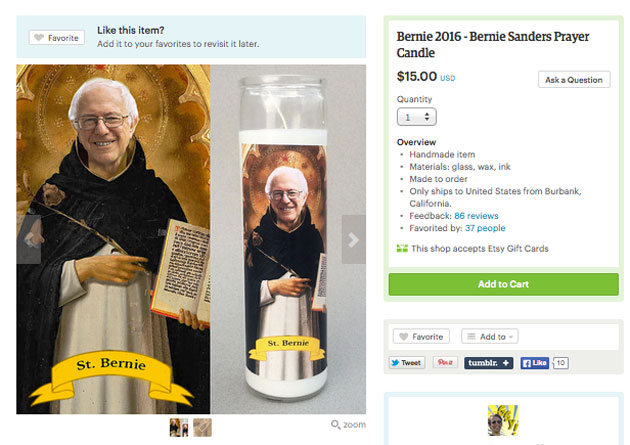 Bern your house down with the Bernie Sanders prayer candle! This is perfect for that special someone who loves Bernie Sanders but isn’t really convinced that he’s Jewish. GoSaintYourself will donate $3 from every purchase to Sanders’ campaign. 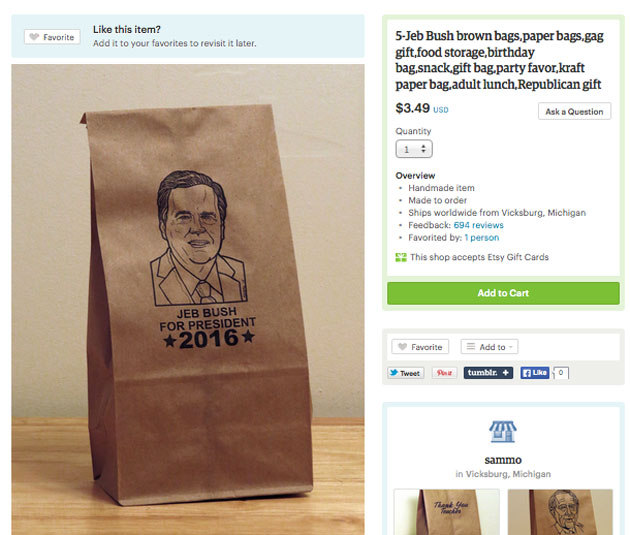 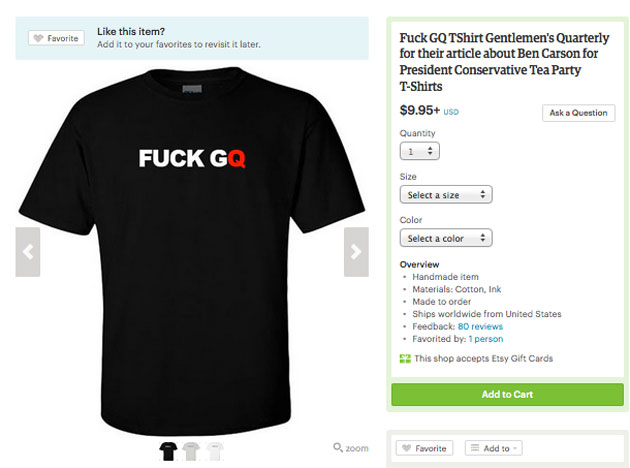 This oddly specific piece of apparel was inspired by a GQ article by Drew Magary entitled “Fuck Ben Carson,” which Carson supporters considered far more distasteful than Carson’s suggestion that victims of an Oregon mass murder should have stopped the shooter themselves. Available in three colors—but not denim—this is a surprisingly functional T-shirt, perfect not just for Carson supporters, but for anyone who’s ever gotten upset (or will get upset at some point, any point) over the magazine’s depiction of women, overpowering cologne ad inserts, or skinny-suit recs. 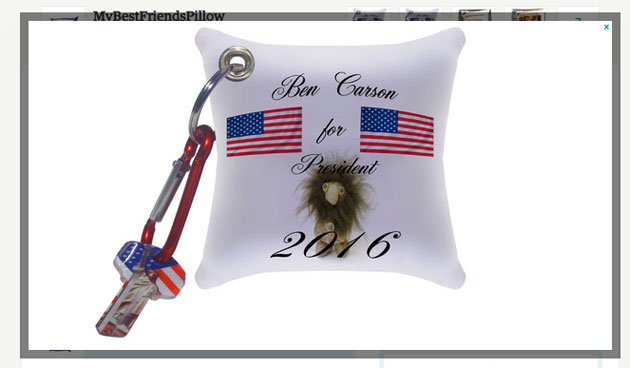 What is this, a pillow for ants? 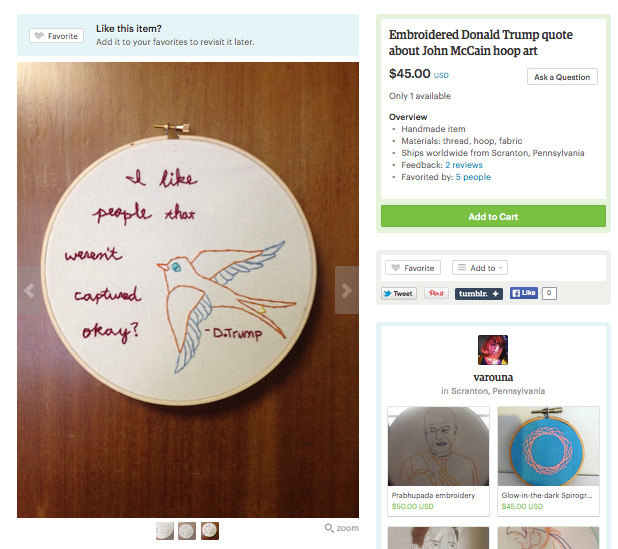 Celebrate the fourth (or was it the fifth?) incendiary statement that was going to sink Donald Trump’s campaign but didn’t because pundits are worthless and it turns out a large percentage of Republican primary voters also prefer people who weren’t captured, okay? For $45, we’d prefer at least a few more doves, and maybe some quotation marks. It’s not the most absurd of Trump statements, either, but this one probably reads less offensively to neutral house guests than “Somebody’s doing the raping.” (If you are looking for some less subtle embroidery, there are other options.) You may also enjoy: 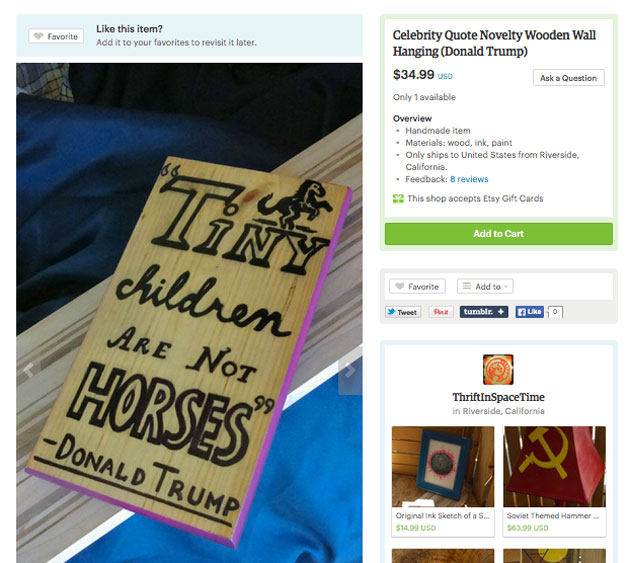 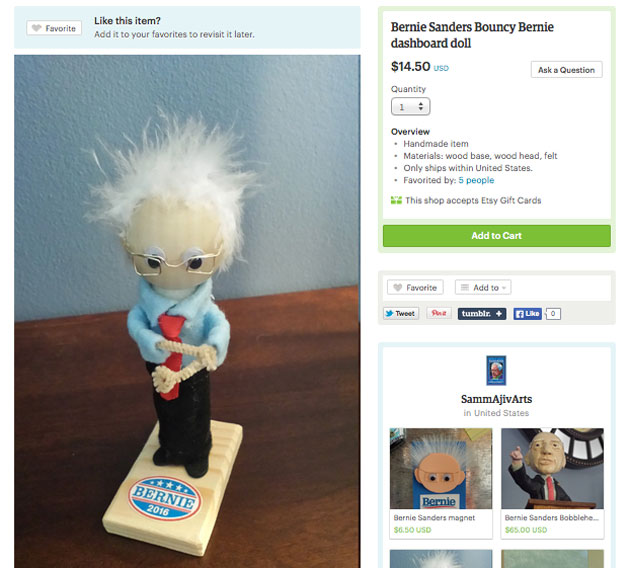 The hair comes from a feather boa, and according to the seller, “His tie is actually done up in a full-Windsor.” Each doll is shipped via USPS, in solidarity with the pro-Sanders postal workers union, and 10 percent of all proceeds go to the Sanders campaign. 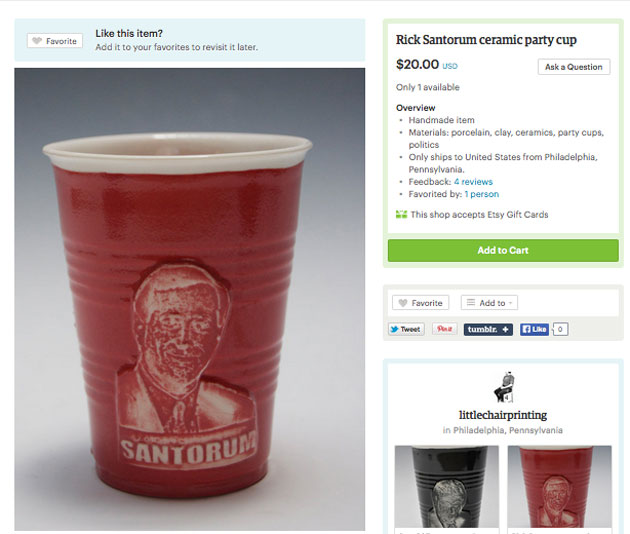 How about a nice cup of Santorum? 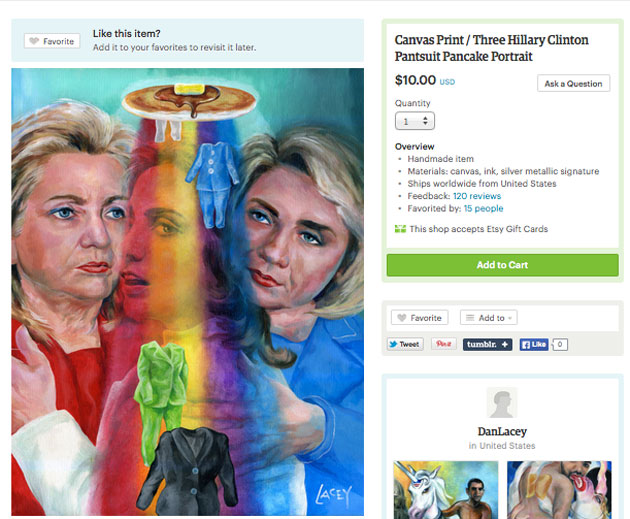 So here’s the thing about art: We’re all just pretending it makes sense. Billionaire Bill Koch—of the billionaire Kochs—just sold a Picasso for $67.5 billion. But not, like, one of the really famous ones, where various household objects are split into weird pieces that don’t make sense. It was kind of a low-grade Picasso; he painted it when he was 19, and I mean, you can’t hang that thing just anywhere. You can have this for $10—a steal—and it’s got a nice little post-modern touch, in conversation with themes of modernity, feminism, and notions of identity in the digital age. If you’re looking for something with a little more darkness, we might recommend:

(What does this mean?) 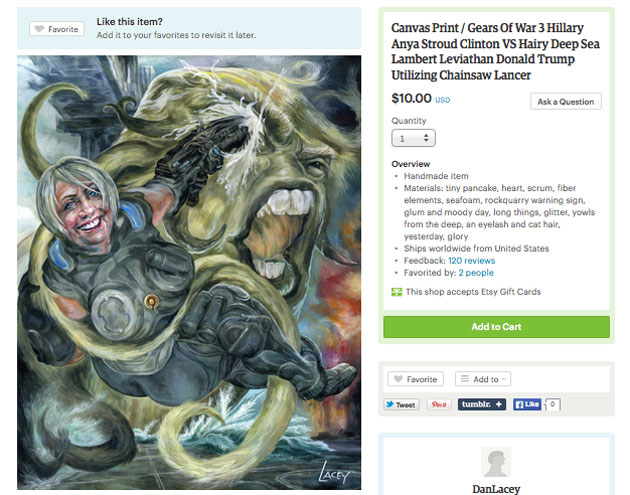 The scene depicted in this painting actually happened. Ben Carson saw it.

You never know you need a butter stamp until you really need it, and then it’s too late. At that point you will have to engrave the visage of some racist rich dude from Queens into your butter by hand. Be smart. Think ahead. Stay vigilant. 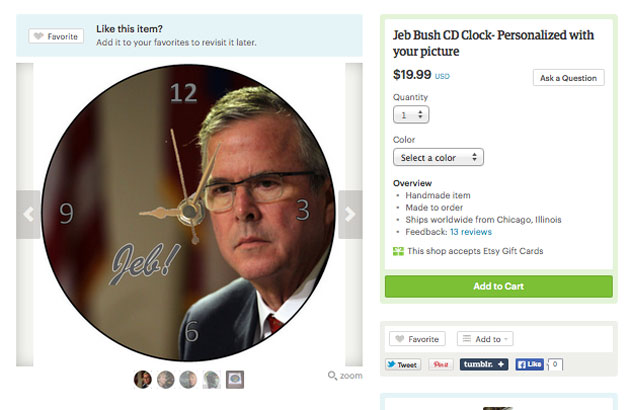 Lindsey Graham as a troll painting 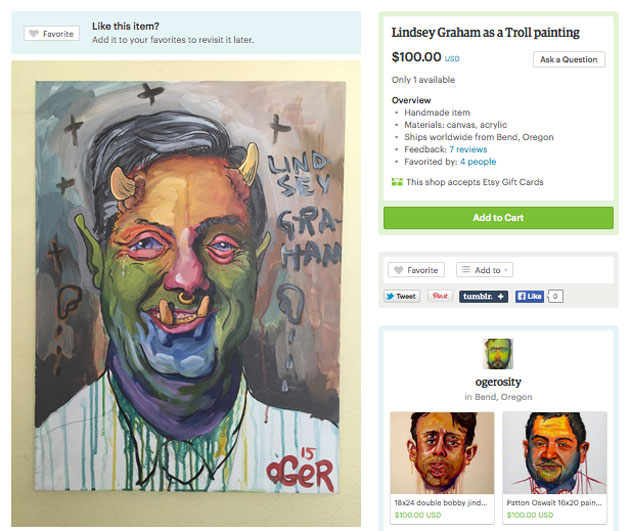 “This is a 18×24 acrylic painting of United States Senator Lindsey Graham as a troll crying a single tear of love for his country.” 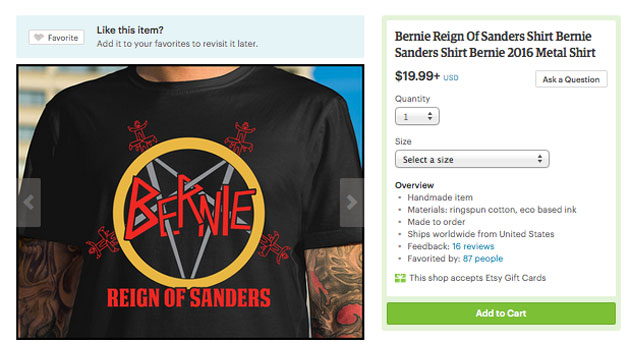 The Venn diagram of metal fans and Bernie Sanders fans is a circle. 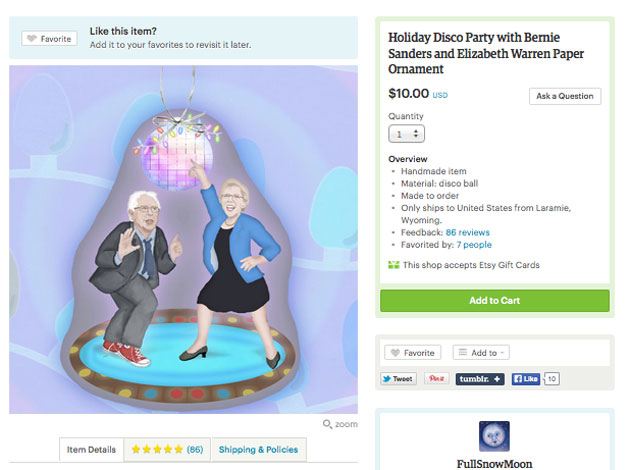 Fill your amendment tree with the gift that both embraces late-stage capitalism and destroys it at the same time.