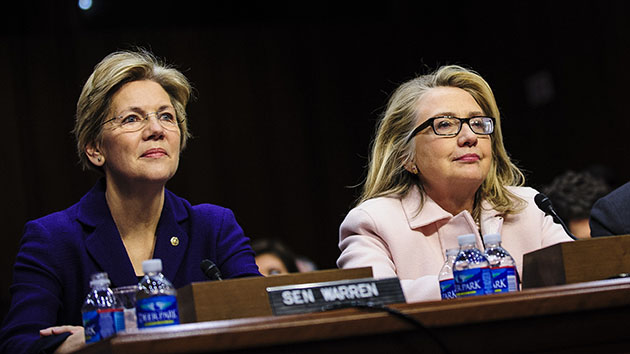 Hillary Clinton will make a stop in Washington, DC, on Monday night to show off her resounding support from the Democratic women in the US Senate. At a “Women for Hillary” event near the Capitol, 13 of the 14 female Democratic senators will voice their support for Clinton’s presidential campaign, with backers ranging from moderates such as Heidi Heitkamp of North Dakota to liberals including Wisconsin’s Tammy Baldwin.

But amid that overwhelming support, it’s the lone holdout that might be most notable: Elizabeth Warren.

The progressive icon from Massachusetts is one of the few Senate Democrats who have not yet endorsed Clinton. Of the 44 Democrats in the Senate, 38 have endorsed Clinton. (Bernie Sanders has yet to lock up public support from even one of his Senate colleagues.)

But Warren has been conspicuously reticent. A favorite of the progressive base who has been pushing her Democratic colleagues to be more openly liberal, Warren has yet to throw her support behind the Democratic front-runner. In 2013, Warren joined all other Democratic women in the Senate in signing a letter encouraging Clinton to enter the 2016 race. Warren and Clinton later met at Clinton’s DC home late last year while the former secretary of state was readying her campaign launch. During that meeting, Clinton reportedly asked for Warren’s advice but not her endorsement.

But since Clinton made her campaign official earlier this year, Warren has remained largely silent on presidential politics, with her few stray comments pointing to a reluctance to align her political brand with Clinton’s. In July, Warren implicitly called out Clinton at the annual progressive activist confab Netroots Nation, stating that she couldn’t see herself supporting a presidential candidate who wouldn’t ban the revolving-door windfall bonuses Wall Streeters receive when they take a government job in Washington. Warren specifically said her endorsement was contingent on a candidate’s support for a bill introduced by Baldwin to end these so-called golden parachutes. The following month, Clinton announced her support for the legislation, which has yet to receive a vote in the Senate.

Still, Warren hasn’t cozied up to the Clinton crowd. In August, Warren met with Vice President Joe Biden while he was still flirting with the idea of a presidential campaign. And at a book release event at a Senate office building last month, Warren used her opening remarks to attack Clinton’s campaign rhetoric. She didn’t name Clinton explicitly, but said she had been disappointed to watch the Democratic debates and see candidates dismissing the need to reinstate Glass-Steagall, the Depression-era law separating commercial and investment banking that was repealed under President Bill Clinton. With both Sanders and former Maryland Gov. Martin O’Malley backing a new Glass-Steagall, Warren didn’t have to use Clinton’s name to make it clear who she was referring to when she said Democrats shouldn’t be asking if Glass-Steagall alone could have stopped the recent recession. “I think that’s just the wrong question to ask,” she said with exasperation, “the wrong point to make.”