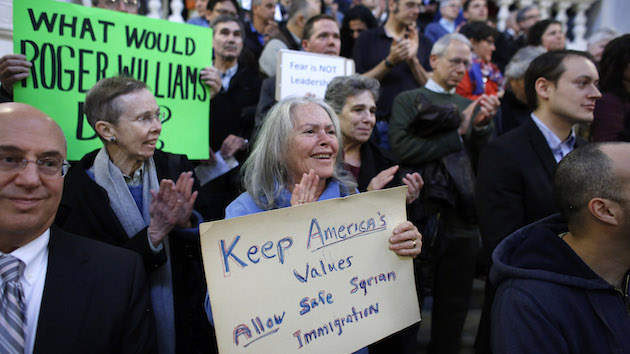 Earlier this week, a Syrian family of three on their way to the United States received an unexpected surprise: their long-awaited resettlement to Indiana was, with less than 24 hours to go, being shifted to Connecticut, because Indiana Gov. Mike Pence had demanded that no Syrian refugees be allowed into his state.

The case got widespread national attention as a symbol of the backlash against Syrian refugees following last week’s terror attacks in Paris. But nonprofit groups that help resettle refugees across the country say the case wasn’t a sign of things to come, but a one-off that won’t be repeated.

“We’re not going to capitulate to this,” says Carleen Miller, executive director of Exodus Refugee Immigration, the Indianapolis resettlement organization that was handling the Syrian family’s case. “We intend to resettle Syrians.” Wendy Johnson, the communications director for Episcopal Migration Ministries, the national group that works with Exodus, was equally firm. “The case in Indiana was a one-time occurrence,” she remarks.

Miller says Pence’s gambit worked because of short notice. Her office received a letter from the Indiana Family and Social Services Administration on Tuesday saying the state wouldn’t provide resettlement funds for Syrian refugees. Those dollars help pay for a variety of services, including English classes, counseling, and food assistance. By the time the letter arrived, the family was on its way to the United States, and Miller says she didn’t have time to scramble for other resources. “The decision I made [to redirect the family to Connecticut] was because the family was coming in less than 24 hours and all this had erupted, and nobody told me what the governor could or couldn’t do that would disrupt services or benefits to the client,” she says. Rather than giving the family an uncertain welcome, she chose to send them to another destination where resources were fully available.

If a resettlement group has more time to prepare, it can find private money to make up for state aid that is taken away, Miller explains. She adds, “That’s what we need to know, that families will be welcomed by us and that we’ll have the resources to provide what they need.”

Officials at resettlement agencies haven’t yet received definitive word on what state governors can actually do to prevent refugees, but they insist that moves by Pence and other governors who have refused Syrian refugees are illegal on several counts. “If this was to be implemented, we’re going to be in default of our international covenants,” says Erol Kekic of Church World Service, a resettlement agency. “Article 31 in the [UN] refugee convention basically says we can’t discriminate based on nationality or membership in a particular religious group, and this is exactly what we’re doing.”

Even the supposed state refugee funds that governors control aren’t strictly theirs to manage: States receive that money from the federal government. The cash is typically doled out by a state refugee coordinator, but that’s not mandatory. “It’s actually at the discretion of the director of the Office of Refugee Resettlement [of the Department of Health and Human Services] to decide who administers these funds,” Kekic says. “They’re not state funds.”

This Syrian family’s quick shift to Connecticut was motivated by logistics and not a fear of local backlash, according to refugee advocates, but that doesn’t mean refugees feel safe. Resettlement agencies say their local offices have fielded numerous calls from nervous refugee families and have also received reports of harassment. Carleen Miller of Exodus reports that one Syrian refugee family in Indiana expressed concern about the signal conveyed by Pence’s move. At school, the couple’s child was confronted by another student. “The classmate said, ‘Are you a supporter of ISIS?’…It’s really disturbing on a variety of levels.” Another refugee in Louisville, Kentucky, reported a death threat. “We have had one report of a Middle Eastern client…getting off the bus and somebody yelling, ‘I will kill you!'” says Kekic, from Church World Service. “So the guy went home and shaved his beard and cried, and then called the agency to say, ‘I don’t know what to think anymore. I didn’t do anything to anyone. Here I am, what do I do next?'” Local resettlement offices have also received threats, Kekic points out.

Many refugee families now live in a constant state of tension, according to resettlement officials. “They feel afraid, they’re not sure what to do, they don’t know if they belong there anymore, how should they behave,” Johnson say. But refugee assistance groups also note that local communities have mostly been welcoming.

In Connecticut, the Syrian family of three—they have so far declined to give their names to media outlets—arrived in New Haven on Wednesday and was greeted by Democratic Gov. Daniel Malloy, one of the few politicians to publicly welcome Syrian refugees in the past week. “Americans sometimes overreact to issues, but in the end they come back and find center,” he reassured the family, according to Chris George, the executive director of Integrated Refugee and Immigrant Services, the group that inherited the case from Exodus.

Then, after Malloy left, the family prepared for their first night in their new homeland.