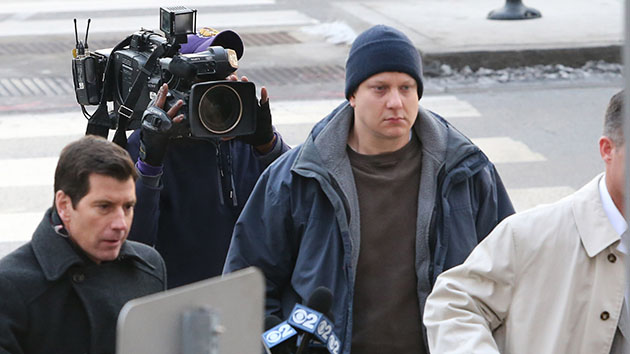 Chicago police officer Jason Van Dyke turns himself in to authorities on Tuesday, November 24, to hear charges of first-degree murder in the October 2014 killing of Laquan McDonald.Antonio Perez/Zuma

The day before Chicago authorities plan to release a violent video showing the killing of 17-year-old Laquan McDonald, the Chicago police officer who allegedly shot him 16 times in October 2014 will face first-degree murder charges, according to the Chicago Tribune.

Jason Van Dyke, 37, is the first Chicago police officer to be charged with first-degree murder in nearly 35 years, according to the Tribune. Van Dyke appeared in court Tuesday to hear the charges and is scheduled to have a bond hearing Tuesday afternoon. The city of Chicago said it would release a recording of the shooting from a police car dashboard camera, which showed Van Dyke “jumping out of his squad car and within seconds unloading 16 rounds into 17-year-old McDonald,” lawyers for McDonald’s family told the Tribune. They added that “after the first few shots knocked McDonald to the ground, Van Dyke fired another volley that struck the teen repeatedly as his body lay in almost a fetal position on the ground.”

The police narrative of the events has been at odds with what was recorded on the video. The police have said that after responding to a report of someone trying to break into cars, they found McDonald in the street, puncturing the tires of a car with a knife. When ordered to drop the knife, the police say McDonald turned and walked away. The responding officers didn’t have a Taser and called requested backup, but they followed McDonald. A second police car arrived and the two cars tried to box McDonald in. Police say he punctured one of the police cars’ tires with a knife and damaged a windshield. When police got out of the car, according to initial police claims, McDonald lunged at them with a knife and Van Dyke shot him.

But the video reportedly shows McDonald walking away when Van Dyke opens fire, and an autopsy showed that several of the bullets hit McDonald in the back. In April, the city of Chicago gave the McDonald family a $5 million settlement before they filed suit, according to the Tribune, but the city prevented the video from going public until the investigation into Van Dyke concluded. In response to a public records lawsuit filed by freelance journalist Brandon Smith, a judge last week ordered the city to release the video.

The graphic nature of the video has city leaders preparing for protests. Mayor Rahm Emanuel has called Van Dyke’s actions “hideous,” and asked the city’s religious and political leaders to urge peaceful protests. But several leaders told the Tribune that Emanuel and the city have handled the situation poorly and that people in the community feel betrayed and angry.

“There is a group that is not listening to him and not listening to us either, but nevertheless we are hoping these protests and demonstrations will be peaceful,” the Rev. Ira Acree, a pastor at the Greater St. John Bible Church in Chicago, told the Tribune. “But we know they are coming, because if there was no protest that would mean we’ve become immune to this madness.”