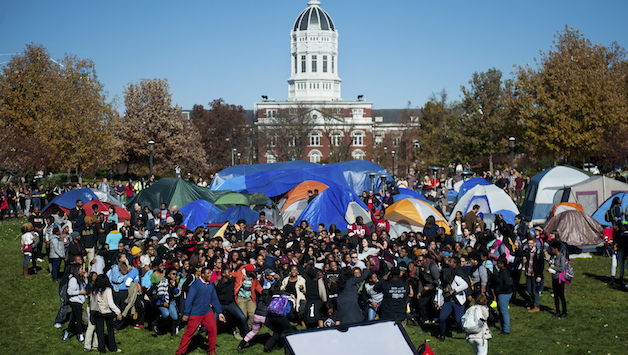 It has been a week and a half since massive student demonstrations at the University of Missouri led to the ouster of university system president Tim Wolfe and Chancellor R. Bowen Lofton. The movement at Mizzou has sparked solidarity protests across the country—and fired up student organizers elsewhere to make their own demands about ending systemic racism.

At a number of schools, organizers are calling for the resignations of top administrators who they say haven’t done enough to respond to racism on campus. Many plans envision new racial-justice curricula, and some protesters are asking their colleges to hire administrators with titles like “Diversity Officer.” Most are demanding that colleges hire more faculty from underrepresented groups—not just black and Latino professors, but female, queer, and non-gender-binary black and Latino professors, and those who study identity and culture. And nearly every list of demands includes mandatory sensitivity training for faculty and staff.

Here’s a sampling of some recent protests:

Princeton University
Location: Princeton, New Jersey
Princeton students are demanding that the school remove references to Woodrow Wilson from the name of a residential college and the school of public policy and international affairs. Wilson, a former university president, reinstituted segregation in federal agencies, once declaring the policy “not a humiliation, but a benefit.” Around 200 students walked out of class on Wednesday, and 30 occupied the president’s office late Wednesday night, with around 150 remaining outside the administration building. The students, organized by the university’s Black Justice League, have released a list of demands that also includes required cultural competency training for faculty and staff; a required course on the history of a marginalized people; and a dedicated campus space for black students. On Wednesday, university president Christopher Eisgruber said he disagrees with some of the protesters’ demands?, though the school has announced it will change the title of residential college “masters” to “heads.”

Occidental College
Location: Los Angeles
Occidental students say the college hasn’t done enough to address complaints of campus racism, including racially motivated harassment from other students and insensitive classroom comments. Last Thursday, more than 600 students, faculty, and staff walked out of class and held a teach-in on a quad, and then they marched to the president’s home. On Monday, several hundred students occupied an administrative building, presenting school officials with a list of 14 demands, including the creation of a black studies program and the removal of LA police from campus. Occidental administrators have released a point-by-point plan of action that meets many of the protesters’ demands, though Jonathan Veitch will remain president of the college.

Since Mulledy sold 272 slaves as a means of paying off Georgetown’s debt, students organized under the hashtag #GU272 on Twitter and Facebook.

Georgetown University
Location: Washington, DC
Georgetown students have been protesting for the past week to rename campus buildings originally named for two school presidents, Thomas Mulledy and William McSherry, who owned slaves in the early 1800s. They staged a sit-in outside the president’s office and held a solidarity demonstration during which students read a list of demands that included renaming the buildings and installing plaques on unmarked graves of slaves on campus. (Since Mulledy sold 272 slaves as a means of paying off Georgetown’s debt, students organized under the hashtag #GU272 on Twitter and Facebook.) On Monday, Georgetown administrators announced that the two buildings would be renamed; in the interim, they will be called “Freedom Hall” and “Remembrance Hall.”

Yale University
Location: New Haven, Connecticut
Last month, the Intercultural Affairs Committee sent an email that urged students not to wear “culturally unaware and insensitive” Halloween costumes that could offend minority students, such as blackface, feathered headdresses, or “war paint.” Faculty member Erika Christakis responded by saying she was concerned by increasing censorship on campus, and that students should be allowed to express themselves however they see fit. “Whose business is it to control the forms of costumes of young people?” she wrote. “It’s not mine, I know that.” The campus exploded, and hundreds of students signed an open letter accusing Christakis of racial insensitivity. Not long afterward, a black undergraduate accused fraternity Sigma Alpha Epsilon of barring a group of women of color from a “white girls only” party, an allegation the fraternity denies. Students have been calling for Christakis to step down, and protests against campus racism have been ongoing.

Claremont McKenna College
Location: Claremont, California
Claremont McKenna students have been organizing for racial justice on campus since February and say they secured commitments from administrators to make reforms this fall, including a resource center for students of color. According to organizers, though, the college failed to follow through on its promises. Then, on October 23, a senior from a “working-class, immigrant Mexican family” published an op-ed about feeling alienated on campus. Dean of Students Mary Spellman wrote back to the student, promising to better serve those “who don’t fit our CMC mold.” Students responded with protests and, reportedly, hunger strikes, leading Spellman to resign last Thursday. College president Hiram Chodosh told the Los Angeles Times that the protests had “accelerated” changes that had stalled in his administration. He called for creating a resource center and hiring staff to mentor students from diverse backgrounds.

A fraternity distributed a party invitation instructing students to dress as either “preps” or “crooks,” noting that “crooks” should come in “thuggish style,” wearing “a bandana, baggy sweats, a t-shirt, snapback and ‘bling.'”

Ithaca College
Location: Ithaca, New York
During an RA training session at the beginning of the semester, campus safety officers insisted that racial profiling does not happen at Ithaca, sparking protests. Then, in October, a fraternity distributed a party invitation that instructed students to dress as either “preps” or “crooks,” noting that “crooks” should come in “thuggish style,” wearing “a bandana, baggy sweats, a t-shirt, snapback and ‘bling.'” At an alumni panel, a black alumna was called a “savage” by her fellow panelists. Last Wednesday, about 1,000 Ithaca students and faculty staged a walkout, demanding a vote of no confidence for college president Tom Rochon. On Monday, the humanities and sciences faculty published an open letter calling for Rochon’s resignation. “President Rochon has shown a persistent inability to lead Ithaca College prudently, effectively, or collaboratively,” they wrote. “[T]his inability has now reached a crisis point.” Faculty will conduct a teach-in about Ithaca’s racial climate Thursday, and organizers plan to hold a vote of confidence/no confidence for Rochon in the coming weeks.

Johns Hopkins University
Location: Baltimore
Student activists began organizing protests following the April death of Freddie Gray, but their first campus-specific protest occurred last Friday. The university’s black student union organized a demonstration against insensitivity and a lack of diversity, gathering on a campus quad where university president Ronald Daniels was filming a video. Protesters listed demands, which included increasing the number of black female professors in the women, gender, and sexuality program and instituting a no-tolerance policy for racial discrimination. Daniels agreed to attend an open forum with concerned students on November 30.

University of Alabama
Location: Tuscaloosa, Alabama
Inspired by the Mizzou protests, Alabama students drafted a letter describing the “unresolved tensions surrounding race, class, gender, [and] sexual orientation” they experience on campus and a lack of administrative action to address their grievances. On Friday morning, students hand-delivered the letter to the university president’s secretary, calling on the school to create a full-fledged Office of Diversity, which would oversee reforms to hiring practices and the curriculum. Anticipating administrative delays, the students set a timeline for rolling out the new office, as well as an interim plan to convene a diversity council of students and faculty.

Purdue University
Location: West Lafayette, Indiana
A rally on Friday drew several hundred student protesters, after president Mitch Daniels called Purdue a “proud contrast to the environments that appear to prevail at places like Missouri or Yale.” Their plan demanded an apology from Daniels; a 20 percent increase in minority faculty and staff, and a 30 percent increase in minority students by 2020; more financial aid; more resources and support for minority faculty and staff; the creation of a Purdue Police advisory board; a stronger hate-speech policy; and a “comprehensive racial awareness curriculum.” When Daniels didn’t attend the rally, students held signs reading “Where’s Mitch?”

Vanderbilt University
Location: Nashville, Tennessee
Vanderbilt students are calling for the renaming of a dormitory that bears the inscription “Confederate Memorial Hall.” While the dorm was renamed Memorial Hall in 2002, the inscription remains due to a prior lawsuit between Vanderbilt and the Daughters of the Confederacy, which paid $50,000 toward the building’s construction in 1933. The judge ruled that if the inscription is ever removed or altered, the university must pay the Daughters the current value of their contribution. (The student protesters say it’s worth $1 million today.) Additionally, more than 1,600 students have signed a petition urging the university to suspend and investigate professor Carol Swain, a conservative black commentator whose recent article topics have included America’s “crusading homosexual agenda” and how Islam is “positively dangerous.” The petition alleges that Swain discriminated against non-Christian and LGBT students in class and that she misrepresented her views as being endorsed by the university. Swain’s response to the students? “Grow up.”

At least 50 protests have been held at campuses nationwide in solidarity with the University of Missouri: