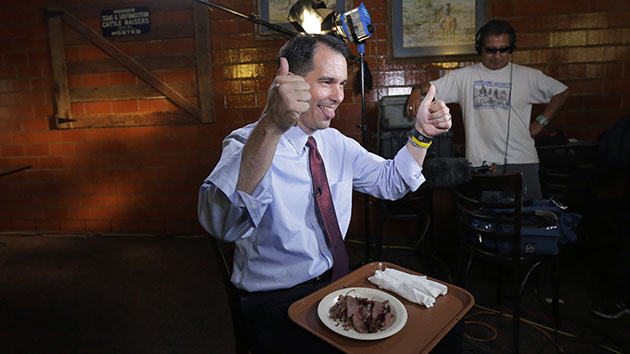 Scott Walker’s presidential bid may have failed, but the Wisconsin governor and his Republican allies are making a massive push to transform the way the state conducts elections and investigates illegal campaign activity. If they’re successful—and by all indications, they will be—by the end of this week, they will have uprooted Wisconsin’s anti-public-corruption laws and lifted restrictions on the money pouring into state elections.

For three years, prosecutors suspected that Walker had illegally collaborated on his 2012 recall election with conservative Wisconsin groups that raise unlimited sums from undisclosed donors. The prosecutors launched a secret probe, known as a John Doe investigation, into the governor’s interaction with these dark-money groups, which were legally barred from coordinating with campaigns. But this summer, the conservative state Supreme Court halted that investigation, giving candidates and dark-money advocacy groups the ability to collaborate without punishment.

Now Wisconsin Republicans, with the support of groups affiliated with the billionaire Koch brothers, are making sure that campaign finance investigations never happen again—and that more money than ever floods the state’s elections.

“This is really just about revenge,” says Brendan Fischer, the general counsel at the Center for Media and Democracy, a watchdog group that focuses on government corruption. “It’s about payback for the John Doe investigation.”

On October 23, Walker signed legislation to ensure that prosecutors could not investigate public officials as they had investigated him and his allies. Under a unique Wisconsin statute, prosecutors could previously launch wide-ranging secret inquiries similar to grand jury investigations. Now, as the Milwaukee Journal Sentinel reported, the law can no longer be used to “look into allegations of bribing public officials, using elected office for personal gain and corruptly influencing legislation.”

Last week, the state Assembly passed two additional bills that would further erode the state’s campaign finance laws and election oversight. Next week, the Republican-led state Senate is expected to take up these bills.

One bill dismantles the state’s nonpartisan elections board, which participated in the investigation of Walker. The Government Accountability Board, which oversees election administration and enforces campaign finance, ethics, and lobbying laws, has been hailed as a national model for effective election oversight. But the Republican bill would replace it with two partisan commissions run by an equal number of Democratic and Republican appointees.

If that sounds familiar, it’s because that is the structure of the Federal Elections Commission, an agency whose partisan split has rendered it unable to muster the majority vote needed to penalize candidates and outside groups for violations of campaign finance laws. The agency’s own chair acknowledged that the FEC is “worse than dysfunction” and that the “likelihood of the laws being enforced is slim.”

Yet Republicans in Wisconsin want to hand over election, campaign finance, and lobbying oversight to a body structured the same way. “It would be an ineffective agency,” Fischer says. A handful of Republican legislators have balked at the bill, setting up what could be a tense vote this week. “If it’s set up so they never agree on anything, then nothing gets investigated,” Republican state Sen. Luther Olsen said.

The second bill the state Senate will take up this week would overhaul the state’s campaign finance laws. It would allow candidates to coordinate with so-called issue advocacy groups, which can raise unlimited funds and spend them on political ads. (The ads can’t explicitly tell viewers to vote for or against certain candidates but can still paint them in a positive or negative light.) In other words, the exact kind of coordination that prosecutors suspected Walker of engaging in would now be legal. The bill would double the amount that individuals and groups can contribute to campaigns—a somewhat meaningless limit, given that issue advocacy groups would be able to receive unlimited contributions without disclosing their donors. Finally, the bill would no longer require outside groups that explicitly tell Wisconsinites to “vote for” or “vote against” a candidate to disclose their donors for ads used more than 60 days prior to an election.

Aiding the effort to push these bills through the Senate and win over a few wavering Republicans is the Wisconsin chapter of Americans for Prosperity, a Koch-funded group and the only one registered to lobby in favor of the Government Accountability Board bill. The group is running digital ads targeting the constituents of the four Republican senators who have wavered on the legislation to dismantle the board. The Wisconsin Club for Growth, the dark-money group that was investigated alongside Walker for illegal coordination and is also tied to the Kochs, started a robocall campaign in those state senators’ districts.

Supporters of the bills have argued that they are intended to protect free speech. “Democrats are stuck in hyperbole overdrive,” the Republican speaker in the state Assembly, Robin Vos, said in a statement.* “They’re misleading the public and refusing to accept federal law set forth by the U.S. Supreme Court’s ruling on political speech.”

Though the three bills involve state-level elections, they could affect the federal elections in November 2016, when Wisconsin will hold a contested US Senate election and will once again be a swing state in the presidential race. Next November will be the first major election when Wisconsin’s restrictive voter ID law is in effect. The implementation of that law will be determined by the body overseeing elections. If the Government Accountability Board is dismantled and replaced with a partisan commission months before that election, it could reshape the electorate in Wisconsin.

“It’s about pure political power—politicians immunizing themselves from public scrutiny,” says Fischer of the three bills. “It’s pretty blatant. It’s like we’re in a Central American country in the 1980s or something.”

Correction: An earlier version of this article misstated Robin Vos’ position in the Legislature.