One success of gun-rights activists over the past decade has been their campaign to block the advent of smart guns, firearms that use biometric and other sensor technologies to prevent them from being fired by anyone other than their owners. Even though smart guns are widely available overseas, no American gun retailers sell them—in no small part due to threats and harassment aimed at any who have tried. But now, pending legislation could shake up that status quo.

The chill on smart guns in the United States is to some degree the unintended consequence of a 2002 New Jersey law that would phase out the sale of conventional guns in that state; the law requires New Jersey gun dealers to sell only smart guns once they become available in retail stores anywhere else in the country. The law was intended to spur the market for the technologically innovative weapons, whose backers believe they could enhance safety and help reduce certain types of gun violence, such as attacks with stolen firearms and the all too common accidental shootings deaths of children. But the law badly backfired by becoming fodder for gun-rights activists, who argued that smart guns are part of a government plot to track and ultimately ban all guns.

“This new law forces gun dealers to offer a smart gun, but still provides a choice for gun owners to buy whatever they want.”

New Jersey legislators are now aiming to get, well, smarter about the issue. New Jersey state Sen. Loretta Weinberg, who authored the 2002 law, announced on Sunday that she wants to scrap it. A replacement bill that she plans to introduce on Thursday would instead require all of the state’s gun dealers to offer at least one model of smart gun for sale. Weinberg made the announcement Sunday night in a 60 Minutes story in which she accused the National Rifle Association of using the 2002 law as a tool to block smart guns nationwide.

“The whole problem with the mandate was that it forced buyers in New Jersey to buy a smart gun,” says Ralph Fascitelli, the president of Washington CeaseFire, a prominent Seattle group working to reduce gun violence. “This new law forces gun dealers to offer a smart gun, but still provides a choice for gun owners to buy whatever they want.” Fascitelli believes that within a decade smart guns could capture a third of the $3 billion US handgun market. A recent poll presented at a smart-gun conference in Seattle by the political consultancy Penn Schoen Berland found that 54 percent of gun owners under the age of 45 are willing to consider swapping out their conventional pistols for smart guns. And 83 percent of gun owners, it found, want gun dealers to be able to sell the weapons.

The palm-reading biometric gun that James Bond used in Skyfall represents the sexiest version, though the technology still is by no means bulletproof (think the iPhone 6’s glitchy fingerprint reader). A more reliable version of the weapons will work only if activated by a radio frequency emitted by a device—typically a bracelet, watch, or ring—worn by the authorized user. 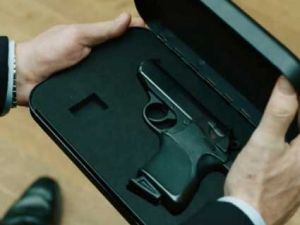 The biometric handgun used by James Bond in Skyfall MGM

In the 1990s, Colt’s Manufacturing Co. built a prototype smart gun that could be fired only if the user wore a special ring. In 2000, rival Smith & Wesson promised to make all of its guns available with high-tech safety features. But both companies dropped the efforts after facing devastating boycotts led by gun-rights activists. Smith & Wesson was forced to lay off 15 percent of its staff. Ever since, the mainstream gun industry has steadfastly refused to pursue the technologies.

Smaller gun companies haven’t had any better luck. Last year, the German start-up Armatix attempted to crack the US market with its $1800 iP1 pistol, a smart gun that operates with a radio-frequency-emitting watch. Maryland gun store owner Andy Raymond initially jumped at the chance to offer the gun, but backed out after activists threatened to kill him and burn down his store. A similar harassment campaign targeted other interested arms dealers and Armatix’s US representative, Belinda Padilla. The company never found a single retail outlet willing to sell its gun.

But some now see a lucrative US market for smart guns. Armatix engineer Ernst Mauch recently quit the company and visited the United States to explore creating a new start-up to build a lower-cost version of the gun for Americans. As the lead engineer at the German gunmaker Heckler & Koch, Mauch designed some of the world’s most lethal weapons, including one that reportedly killed Osama bin Laden. “I still want people to understand that there is a huge potential for this technology,” he told the Washington Post. “The technology was never in question.”

In fact, some high profile Silicon Valley investors are betting that smart guns can disrupt the firearms industry. The billionaire angel investor Ron Conway formed the Smart Tech Challenges Foundation in 2013 to create “the Googles, the Facebooks, the Twitters of gun safety.” Conway recently announced plans to fund the development of a biometric gun lock; a version of the technology may eventually be integrated into a gun.

For now, though, gun dealers remain wary. Several in New Jersey contacted by Mother Jones declined to comment on the proposed law, but one was less than enthusiastic. “You can’t be required to carry anything in a store,” said the person who answered the phone at Lou’s Firearms in Raritan, NJ (he declined to give his name). “It’s just like telling every shoe store that they have to sell a Nike. I believe they should be available, but the market has to decide what they want to use.”