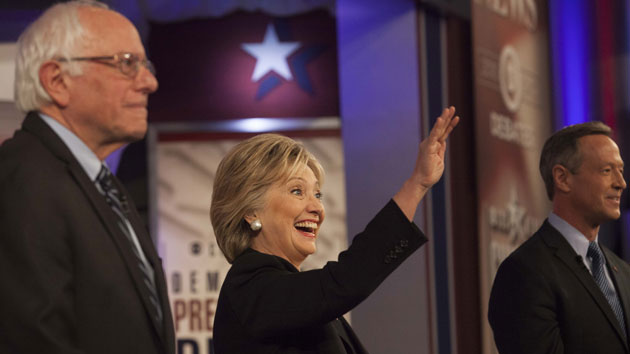 Hillary Clinton and Bernie Sanders may have enjoyed a detente during the foreign policy portion of Saturday’s Democratic debate, but when the subject turned to Wall Street, the gloves came off.

It started when the CBS moderator, John Dickerson, asked Clinton how voters could trust her to rein in Wall Street given her close ties to the financial services industry. Clinton was ready for it. “Well I think it’s pretty clear that they know that I will,” she said.  She described  “two billionaire hedge fund managers who started a super-PAC and they’re advertising against me in Iowa.” Why? Because “they clearly think I’m going to do what I say I’m gonna do.” She then invoked her Senate career and pointed to legislation that she introduced to limit compensation and increase shareholder oversight and continued:

I’ve laid out a very aggressive plan to rein in Wall Street—not just the big banks, that’s a part of the problem, and I’m going after them, it’s a comprehensive plan. But I’m going further than that. We have to go after what’s call the shadow banking industry. Those hedge funds—look at what happened in ’08. AIG an insurance company. Lehmann Brothers, an investment bank, helped to bring our economy down. So I want to look at the whole problem, and that’s why my proposal is much more comprehensive than anything else that’s been put forth.

But when Dickerson asked Sanders for his response, the Vermont senator was unimpressed:

“Here’s the story, I mean let’s not be naive about it,” he said. “Over her political career, why has Wall Street been a major, the major campaign contributor to Hillary Clinton? Now, maybe they’re dumb and they don’t know what they’re gonna get, but I don’t think so.”

Dickerson pressed Sanders on what specifically he believed Wall Street would get for the industry’s campaign contributions to his opponent. Sanders explained:

I have never heard a candidate—never—who’s received huge amounts of money from oil, from coal, from Wall Street from the military-industrial complex, not one candidate, who doesn’t say, ‘Oh, these contributions will not influence me, I’m going to be independent.’ But why do they make millions of dollars of campaign contributions? They expect to get something. Everybody knows that. Once again, I am running a campaign differently than any other candidate. We are relying on small campaign donors, 750,000 of them, thirty bucks apiece. That’s who am I indebted to.

Clinton was ready with a sharp response. “He has basically used his answer to impugn my integrity, let’s be frank here,” she began. “Not only do I have hundreds of thousands of donors—most of them small—and I’m proud that for the very first time, a majority of my donors are women—60 percent.” She said her support for Wall Street is because “I represented New York on 9/11 when we were attacked.”

Where were we attacked? We were attacked in downtown Manhattan where Wall Street is. I did spend a whole lot of time effort helping them rebuild. That was good for New York, it was good for the economy, and it was a way to rebuke the terrorists who had attacked our country. Now it’s fine for you to say what you’re gonna say but I looked very carefully at your proposal. Reinstating Glass–Steagall is a part of what very well could help. But it is nowhere near enough. My proposal is tougher, more effective, and more comprehensive because I go after all of Wall Street, not just the big banks.