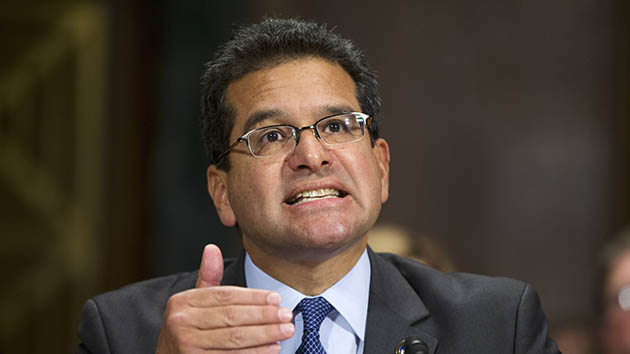 The House reached a deal on a $1.1 trillion spending bill on Tuesday night that avoided a government shutdown with agreements that included lifting the ban on crude oil exports, delaying the implementation of certain parts of the Affordable Care Act, and tightening visa requirements. Also included were nearly $680 billion in tax cuts.

But missing in the massive bill was any debt assistance for Puerto Rico, which is on the brink of insolvency due to more than $72 billion in debt. Despite some recent Republican proposals that would have provided short-term relief (along with strict financial oversight) for the largest US territory, in the end, lawmakers did not include any assistance that would permit the federal bankruptcy provisions that US cities and states are able to use.

“It is unconscionable that Congressional Republicans refused to include in the year-end spending bill meaningful provisions to allow Puerto Rico to restructure its debt,” Rep. Nydia M. Velázquez (D-N.Y.) said in a statement released Wednesday morning. “This would not have cost the taxpayer a dime, but could have helped solve what is rapidly disintegrating into a humanitarian crisis.”

The island is facing a $957 million interest payment on January 1, putting its government in the position of having to choose between paying government workers,  public university workers, and other school teachers, or paying its creditors. Unlike cities and publicly owned entities in the states, Puerto Rico cannot restructure debt under federal bankruptcy laws. Pedro Pierluisi, the island’s nonvoting representative to Congress, introduced legislation in 2014 and 2015 that would offer Puerto Rico’s government that option, but neither bill received any Republican support. Last week, Rep. Sean Duffy (R-Wis.) introduced a bill that included a bankruptcy provision for Puerto Rico, but also included a financial oversight board that Pierluisi and others said was too heavy-handed. Duffy’s bill is in committee.

In her statement, Velázquez listed the many efforts the Puerto Rican government has made to bridge its funding gaps, which include spending less on students, closing a total of nearly 160 schools over the last two years, increasing the local sales tax to 11.5 percent, and laying off 21 percent of its government employees since 2008. “Yet hedge funds continue demanding further, unreasonable austerity measures, rather than accepting a lower rate of return on their investments,” she said.

Sen. Harry Reid (D-Nev.), while calling for passage of debt restructuring for Puerto Rico Thursday, noted that 200,000 Puerto Ricans have served in the US military since 1917, and that at some point next year Congress will honor a mostly Puerto Rican infantry regiment with a Congressional Gold Medal for its service during the Korean War.

“It’s shameful to think that Congress can at once recognize the extraordinary contribution of Puerto Ricans who made the ultimate sacrifice for our country and then do nothing for Puerto Rico when they turn to us for help in a time of crisis,” he said on the Senate floor.

While discussing the budget bill with reporters on Wednesday, House Minority Leader Nancy Pelosi (D-Calif.) also discussed Puerto Rico’s problems.  “We’re concerned about ignoring the urgency of the situation in Puerto Rico, where American citizens are really in a situation that we must address,” she said, according to Politico. “It won’t cost the American people one thin dime to allow Puerto Rico to restructure their debt and their bankruptcy.”

Deepak Lamba-Nieves, an economic development researcher at the Center for the New Economy, an economic think tank in San Juan, Puerto Rico, told Mother Jones Wednesday that the lack of congressional action raises the likelihood that on January 1 Puerto Rico will find itself in the unprecedented position of defaulting on its general obligation debts because the government has to, by law, “address the creditors’ needs before [the needs of] its citizens.”

“It could be a situation where you have a lot of strong lobbying happening from the hedge funds and the financial community,” he says. “This means that the federal government has basically turned its back on over 3 million of its citizens.”

Pierluisi acknowledged that there were two provisions in the spending bill for Puerto Rico’s hospitals. One will reimburse the local hospitals that treat Medicare patients at the same rate as hospitals in the states, giving Puerto Rico’s hospitals $618 million between 2016 and 2025. Another provision provides Puerto Rican hospitals with the same bonuses provided to other hospitals in the United States that implement broader use of electronic health care records under the HITECH Act. (Read about the problems with electronic medical records in this recent Mother Jones story.)

“In total, the omnibus provides nearly $900 million to benefit Puerto Rico hospitals and patients over the next decade,” Pierluisi said in a statement. “Puerto Rico still confronts major disparities under federal health care programs, including the upcoming Medicaid cliff, but it is gratifying to take these two disparities off the list.”

Pierluisi added that the help for hospitals “is largely eclipsed” by the lack of help for the debt crisis.

“Despite our best efforts, the omnibus does not include language empowering Puerto Rico to restructure any of its debt, as every US state is empowered to do,” he said. “Honesty requires me to note that the objections to this provision came exclusively from Republicans.”

Pierluisi closed his statement by saying that a major reason for the current problems facing Puerto Rico is its colonial relationship with the United States.

“Because Puerto Rico is a territory, Congress has nearly complete power over us. We rely on the goodwill of men and women representing the 50 states” he said. “Often, such goodwill is not forthcoming. And sometimes, like today, our treatment can only be described as shameful.”