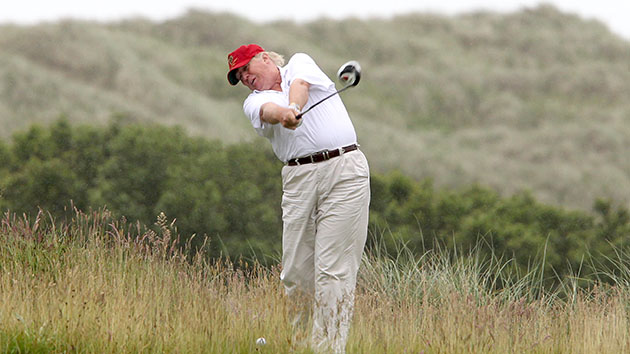 Update (12/9/2015): As of Wednesday morning, the petition to ban Donald Trump from the United Kingdom had more than 166,000 signatures. It was, at that point, the most popular petition on the government’s petition website. Under the rules of the British petition system, if a petition draws 10,000 or more signatures, the government must respond, and if it attracts more than 100,000 signatures, Parliament will consider it for debate. The petition website notes, “Petitions which reach 100,000 signatures are almost always debated. But we may decide not to put a petition forward for debate if the issue has already been debated recently or there’s a debate scheduled for the near future.”

Update (12/9/2015): Robert Gordon University in Aberdeen, Scotland, which was petitioned to revoke an honorary degree it conveyed upon Trump in 2010, announced today it would do so.

These days, Donald Trump has his eye on acquiring a certain high-end and unique property in Washington, DC. But should he want to take a break from the campaign trail for a quick jaunt across the pond to visit his luxury golf resort in the Aberdeen area of Scotland, he might encounter a problem. At least, that’s what one British anti-Trump activist is hoping to engineer.

Suzanne Kelly, an Aberdeen local who has opposed the development of Trump’s golf course (which was built atop environmentally sensitive dunes), recently cooked up a plan to tar the globe-trotting tycoon who now leads the GOP presidential race. She submitted a petition to the British government requesting that it block Trump from entering the United Kingdom due to his harsh campaign rhetoric—deriding Mexican immigrants as rapists and talking about tracking Muslims—which she equates with hate speech. Her petition reads:

The signatories believe Donald J Trump should be banned from UK entry for his continued, unrepentant hate speech and unacceptable behaviour. His unacceptable behaviour is well documented, and we feel it foments racial, religious and nationalistic intolerance which should not be welcome in the UK.

The UK has banned entry to many individuals for hate speech. This same principle should apply to Donald J Trump.  We cannot see how the United Kingdom can condone his entry to the country when many people have been barred for less.

Kelly may be more than tilting at Trump’s windmill, because under the British system of interactive government, any citizen or resident can go to Parliament’s website and submit a petition. If five other people support a submitted petition, the government’s petitions committee will review the petition and decide whether to publish it. If the petition goes up and draws 10,000 signatures, the government will respond. If 100,000 people sign, the measure will be considered for debate in Parliament.

There are potential obstacles to the Trump petition. Parliament’s petition committee can reject a petition at the start. The guidelines for that are spelled out on the government’s petitions website. Here’s a partial list of the reasons for saying no:

We’ll only reject your petition if it’s:

Is this a joke? Kelly says, of course not. She certainly is clear on what she is requesting, and the British government has in the past blocked the entry of persons deemed purveyors of hate. For instance, in 2009, the United Kingdom barred an anti-Islamic Dutch lawmaker from entering the country to screen his film that called the Koran a “fascist book.” (This move was denounced by free-speech advocates.) But there may be some wiggle room for the petitions committee to tell Kelly to take a hike, especially if the British government does not want to embarrass Trump.

If the petition goes forward, is it hard to imagine 10,000 or 100,000 signers? As of Tuesday afternoon, a petition calling for the United Kingdom to accept more asylum seekers and increase support for refugee migrants in the country had 445,000 signatures. Another to stop all immigration and close the UK borders until ISIS is defeated had 440,000 signatures. Meanwhile, Kelly’s petition is now undergoing the committee’s review. She hopes it will be live within a few days.

At the same time, Kelly is pushing another petition calling on the Robert Gordon University in Aberdeen to strip Trump of the honorary degree it granted him. This petition, which has only been posted on a site for activists, reads:

We feel that Donald Trump’s unrepentant, persistent verbal attacks on various groups of people based on nationality, religion, race and physical abilities are a huge detriment to RGU. Hate speech must not have a place in academia, in politics or on the world stage. We are confident RGU will agree with the petitioners, and act swiftly.