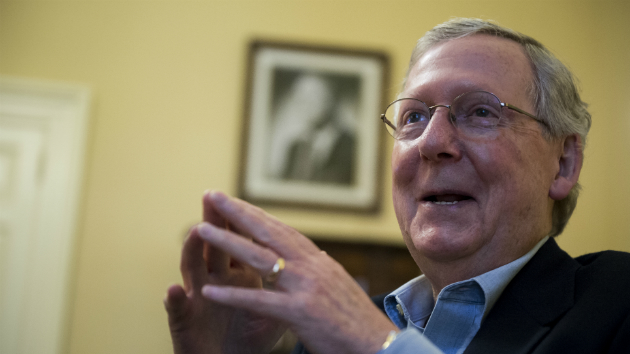 Conservative Solutions Project has run more than 4,882 ads in support of Marco Rubio this election—and not a dime of its funding has been made public. As a politically active nonprofit, the outfit is theoretically regulated by the Internal Revenue Service, but thanks to clever legislative maneuvering by Senate Majority Leader Mitch McConnell and congressional Republicans, there’s no danger that the IRS will apply any special scrutiny to the people or corporations generously financing this key component of Rubio’s run for president. (His actual campaign unveiled its first ad just a few weeks ago).

Buried deep in the massive end-of-the-year spending bill released late Tuesday night were provisions that not only prohibit the IRS from cracking down on groups like Conservative Solutions Project, but that block the Securities and Exchange Commission from prying into the political spending of public companies.

In last year’s budget deal, McConnell pushed through higher limits for campaign contributions to party organizations, allowing wealthy donors to chip in hundreds of thousands of dollars. During this year’s budget negotiations, McConnell initially tried to further loosen restrictions on how party committees spend money. But he faced strong opposition from an unusual coalition of congressional Democrats and members of the ultraconservative Freedom Caucus. The pushback appears to have caused McConnell, a longtime foe of campaign finance rules, to abandon the plan. But he did manage to slip provisions into the legislation that weakened enforcement and transparency when it comes to politically active nonprofits.

One McConnell amendment barred the IRS from spending any money from its budget over the next two years to revise or create new rules that would limit how much nonprofit groups can spend on politics. Since the Supreme Court’s Citizens United ruling, certain types of nonprofits may spend money trying to influence elections and they don’t have to disclose the sources of their funding. These groups, including the pro-Rubio Conservative Solutions, are theoretically limited in how much money they can spend on politics because they are supposed to be using their special nonprofit status to promote “social welfare.” According to the IRS, such groups should spend “most” of their funding on non-political activities, but the rules are vague and the agency has struggled to enforce them. Now, thanks to the provision in the proposed budget, the IRS won’t be able to clarify its regulations.

The other amendment targets the SEC. It’s long been suspected that corporations, including those regulated by the SEC, channel substantial amounts to political nonprofits. Citizens United allowed corporations to take a more active role in influencing elections, but since the decision little corporate funding has flowed to political outfits that must disclose their donors. That may be because corporations are directing their political spending to dark-money nonprofits instead, to keep their fingerprints off the donations. Transparency activists have prodded the SEC to force publicly traded corporations to disclose whether they are donating to any outfit that engaged in political spending. But, like the IRS provision, the new budget prevents the SEC from creating a new rule on this front.

While it was unclear whether the SEC even planned to create such a rule, the amendment blocking the IRS clarifying its existing regulations is more vexing to advocates of campaign finance reform. Congressional Republicans framed the provisions in the context of their ongoing war with the IRS, which they have accused of singling out tea party and other right-leaning groups for improper scrutiny during the 2012 election. GOP House Speaker Paul Ryan defended the provision as “stopping the IRS from suppressing civic participation,” but transparency activists aren’t buying it. Trevor Potter, who is chairman of the Campaign Legal Center, said the amendment will make a bad situation worse.

“There is virtually universal agreement that the current rules are confusing and unclear, and have resulted in abuses both by dark-money groups and by IRS agents in the exemption approval process,” Potter says. “Now, Congress has mandated that these same inadequate rules remain untouched for another year—the agency is not even allowed to continue working on drafting better ones.”

Potter says the ban on the IRS making any new rules on controlling dark-money groups raises a sinister possibility—IRS officials may be powerless to stop money from outside the United States from flowing into the 2016 election. “An effect of this rider is that the door to secret foreign dollars in US elections remains wide open through secret contributions to these ostensibly ‘nonpolitical’ groups that run campaign ads without any disclosure of their donors,” he says.