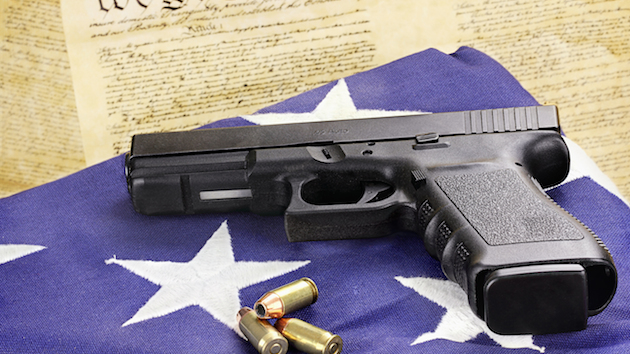 For gun control advocates, this year’s doom has been compounded by an ample dose of gloom. Even after a series of high-profile mass shootings and a reported death toll from gun violence topping 12,000 last year, Congress remains deadlocked and unlikely to pass any laws aimed at reducing gun deaths.

But beneath the morass of bad news are glimpses of progress. In schools, communities, states, and even in the federal government, people are taking action to curb the gun violence epidemic. Here are six areas in which gun control is actually advancing in America.

1. The Supreme Court opted not to expand Second Amendment protections.

On Monday, the Supreme Court declined to hear a case that could have cemented an even wider interpretation of the Second Amendment into national law. The decision came less than a week after shooters in San Bernardino, California, used semi-automatic weapons to slaughter 14 people at an office party in what the FBI is now investigating as an act of terrorism.

In the case, the Illinois branch of the National Rifle Association argued that a Chicago suburb’s ban on semi-automatic weapons and high-capacity magazines violated the Second Amendment. Although there was no official ruling, the court’s decision to turn down the case effectively affirmed the lower court’s decision not to expand Second Amendment protections—thereby opening the door to further local regulation.

In its last two gun cases, in 2008 and 2010, the Supreme Court had significantly expanded the reach of the Second Amendment. In 2008, the court overturned a ban on handguns in the District of Columbia; in 2010, it did the same for a handgun ban in Chicago.

Now, by contrast, the court may be indicating that the much-contested right to bear arms should have its limitations.

The court’s decision looks even more significant in light of the fact that state governments are already taking many of the steps that Congress won’t.

Next November, Nevada residents will also vote on a background-check initiative, which made it onto the state ballot with the support of Michael Bloomberg’s gun control group Everytown for Gun Safety. In California, which already has some of the most stringent gun control laws in the country, a gubernatorial candidate is working to put even tighter legislation on the ballot.

Want to see how your own state ranks on gun control? The Law Center to Prevent Gun Violence has created this handy scorecard.

3. Most Americans, including gun owners, support some degree of gun control.

Congress may not be able to come to a productive compromise, but Americans do agree on some key gun control policies. A survey last month found that a striking 83 percent of gun owners, including many NRA members, support requiring all prospective gun buyers to undergo a background check. A Gallup poll released in October—after the shootings at Umpqua Community College in Oregon but before last week’s attack in Sen Bernardino—found that 55 percent of Americans favored stricter control of gun sales.

Support for gun control has traditionally peaked following mass shootings, only to subside later. Recent polls suggest that fear of terrorism has edged out fear of guns in the popular psyche—despite the fact that jihadist terrorists have killed just 45 people in the United States since September 11, 2001, compared with the more than 12,000 people killed last year alone by gun violence.

4. More and more people say gun violence should be researched as a public health issue.

Last Wednesday, mere hours before the attack in San Bernardino, 2,000 doctors publicly urged Congress to repeal an amendment that has blocked government research on gun violence for nearly two decades.

The so-called Dickey Amendment was propelled through Congress by Republican legislators in 1996 under pressure from the NRA. Due to the provision, the Centers for Disease Control and Prevention and the National Institutes of Health have been unable to put any federal funds toward gun violence research, leaving attempts to curb gun violence hogtied by a lack of information.

But opposition to the amendment is growing. Democratic lawmakers in both the House and the Senate have appealed for a return to federal gun violence research in recent months. Even the amendment’s author, former Rep. Jay Dickey (R-Ark.), has publicly called for it to be overturned.

5. Schools across the country are talking to their students about guns.

Tens of thousands of students across the country have signed their names to an anti-gun-violence pledge this year, promising not to bear arms at school and to resolve conflicts by nonviolent means.

The pledge was born in the mid-1990s, when creator Mary Lewis Grow realized that the conversation about gun violence rarely reached the nation’s youth. Determined to change that, she founded the Student Pledge Against Gun Violence in 1996. It enjoyed a decade of popularity before fading from public view.

Widespread dismay at the lack of government action following the massacre at Sandy Hook Elementary rekindled interest in the pledge, Grow told gun news website The Trace. “I think [people] started looking for other ways to address gun violence,” she said. Students in at least five states have taken the pledge this year, including 59,000 in Georgia and 21,000 in Louisiana.

The pledge goes as follows: “I will never bring a gun to school. I will never use a gun to settle a personal problem or dispute. I will use my influence with friends to keep them from using guns to settle disputes. My individual choices and actions, when multiplied by those of young people throughout the country, will make a difference. Together, by honoring this pledge, we can reverse the violence and grow up in safety.”

6. Gun control is now firmly part of our national debate.

President Barack Obama now calls for gun control legislation after every major shooting. The New York Times last week published a pro-gun-control editorial on its front page—its first page-one editorial since 1920. And while she shied away from the issue eight years ago, Democratic presidential hopeful Hillary Clinton has made curbing gun violence a central plank in her 2016 platform.

America’s gun violence crisis has clearly made its way into the highest levels of our national debate. What comes of that debate remains to be seen, but a whopping $229 billion a year—and, more important, thousands of lives—depend on it.

Correction: An earlier version of this article incorrectly identified when the state of Washington voted to instate universal background checks on gun purchases.