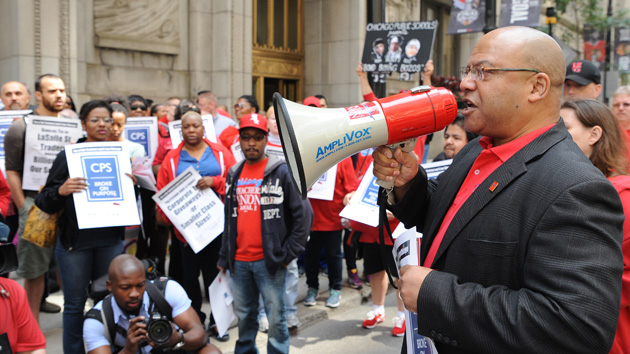 Chicago Teachers Union protesters outside City Hall in Chicago on July 2, 2015, after the district announced 1,400 layoffsPatrick Gorski/NurPhoto via AP Images

The Chicago Teachers Union announced in a statement yesterday that 96 percent of its members have—in reaction to threatened layoffs and budget cuts that could affect 5,000 teachers and staff—voted to strike. The Union is also unhappy about what it says are unreasonable state- and district-mandated policies that suck up limited resources and don’t lead to improved teaching and learning, such as excessive standardized testing and other unnecessary data collection and paperwork, a union representative told Mother Jones.

The last time the Chicago Teachers Union went on strike, in 2012, 90 percent of teachers supported the action. Back then, as Mother Jones reported, teachers demanded better benefits, fair teacher evaluations, and more training. The 2012 strike sparked a fierce debate about the use of standardized testing in grading schools and teachers.

The Chicago public school district is the third-largest district in the country; it serves about 400,000 students. Of these, about 86 percent are poor, 85 percent are students of color, and 16 percent are English-language learners.

Since the last strike in 2012, the district has been through several rounds of staffing cuts and school closures, which have disproportionately affected segregated black schools on the West and South sides of the Windy City. Earlier this year, the district laid off 1,500 staffers, according to Reuters. Only a third of its high schools now have a librarian, according to estimates from the teachers union. In 2013, Mayor Rahm Emanuel closed 50 schools—that’s 10 percent of all Chicago schools—mostly in predominantly black and Latino communities, citing their low performance on standardized tests.

Jitu Brown, a native Chicagoan and the director of Journey for Justice, a coalition of grassroots youth and parent groups in 21 cities, told Mother Jones in August that the closures caused more harm than good. “You had young people being displaced as the one stable institution in our community was eliminated. You had the massive firing of black teachers—as if they were the problem—when equity never existed.” The school closures and staff layoffs backfired politically last year, nearly unseating the once popular mayor, who in 2014 barely won the election against Jesse “Chuy” Garcia, a candidate backed by the teachers union.

What do teachers want this time? The Chicago Teachers Union released a statement and explained some of its demands in more detail to Mother Jones:

1. Stop cuts and staff layoffs: The cash-strapped Chicago Public Schools district is facing a $480 million budget hole and has threatened to issue pink slips to 5,000 teachers, according to the Chicago Sun-Times. “These cuts are unacceptable,” Chicago Teachers Union Vice President Jesse Sharkey told Mother Jones. “These cuts will create an immediate and deep crisis. They can’t actually lay off that many people and run schools.” Sharkey doesn’t believe CPS will end up laying off 5,000 teachers. He says the threats are most likely a negotiation tactic to lay off a number of teachers and impose pay cuts on others.

2. Reduce standardized testing and unnecessary data collection and paperwork: Sharkey said that ever since 2013, when the district started using standardized test scores for almost a third of the information gathered for teacher evaluations (in many subjects), the use of standardized tests has exploded. For almost every subject being taught, Sharkey said, a test was implemented at the beginning and end of the year. In addition to that, other “benchmark” district and state tests are used to measure student progress toward yearly goals. (This is a national trend, as Mother Jones reported in September.) In addition, Sharkey cited discontent among union members around other district requirements, such as demands for a specific number of grades every teacher must post every week in school databases, or strict mandates on what percentages of a kid’s grade must be attached to certain assignments, such as homework or class participation. Many teachers view these requirements as unproductive, top-down micro-management that make it difficult to provide personalized learning experiences for their students, and that signals a lack of respect for a teacher’s professional judgment. Getting rid of these requirements “would not cost a dime to the district,” Sharkey said.

What does Mayor Emanuel say? Emanuel blames the cuts on the state of Illinois, which provides only 15 percent of school funding. (Nationally, average state spending on schools constitutes about 45 percent of total spending.) Emanuel told the Chicago Sun-Times in November that the state sends a much larger subsidy to other, less needy schools in the state too. “Every child and every teacher in the rest of the state receives a subsidy of about $2,400 a year. Chicago teachers and Chicago students get about $156. That is unfair and wrong, especially given all of the educational gains being made.” Without the infusion of $480 million from the state, Chicago public school officials have said more cuts and layoffs will be necessary. Emanuel also offered to raise property taxes by an additional $170 million for the schools in exchange for a 7 percent pay cut to teachers’ salaries.

What happens next? The 27,000 teachers in the union probably won’t actually walk off their jobs until spring. State law requires that both sides agree to work with a neutral fact finder who analyzes the data of the bargaining process and tries to suggest a potential compromise within three months. “Rahm Emanuel is having a terrible year,” Sharkey added. “He really doesn’t need a teachers strike. We have been negotiating this contract for months and obviously had no way of knowing that there would be a massive political crisis with the release of the video [showing the killing of 17-year-old Laquan McDonald by a Chicago police officer]. But enough with the cuts and closures that balance budgets on the backs of poor children and teachers.”