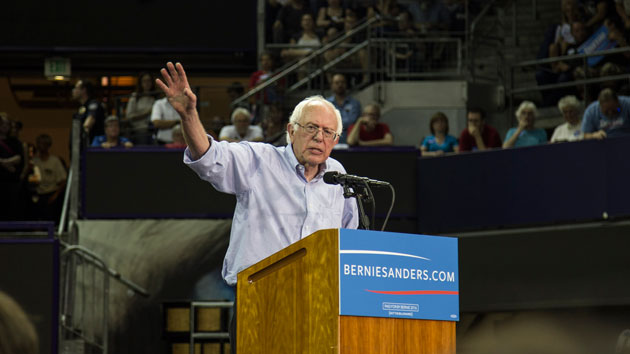 Bernie Sanders is pledging big things when it comes to criminal justice reform, vowing that by the end of his first term as president the nation would no longer be the world leader in incarceration:

I promise at the end of my first term we won’t have more people in jail than in any other country.

But, as racial-justice activist Deray McKesson pointed out in response, Sanders’ promise raises a serious question: Is that even possible, considering that the vast majority of the nation’s inmates are held in state, not federal, prisons?

The Sanders campaign did not respond to multiple requests for an explanation, but the short answer is that the Democratic candidate couldn’t realistically fulfill his promise. According to the Bureau of Justice Statistics, about 2.2 million Americans were locked up as of the end of 2013. Of those, only 215,000 inmates (9.6 percent) were in federal prisons. The rest were in state and local facilities. So even if President Sanders abolished federal prisons altogether, the United States would still have more prisoners than any other country by a pretty large margin. China, which is No. 2 in the world, has 1.7 million prisoners. To edge below China, Sanders would need to cut the national prison population by about 25 percent, with most of that coming from places that are outside federal jurisdiction.

There are a lot of good ideas there, but again, it’s unclear how it adds up to a 25 percent reduction in national incarceration numbers. Just 16 percent of federal inmates are in privately operated facilities, and the percentage of state prisoners in private facilities is less than half that. The mandatory minimums in question are for federal crimes only. And Sanders’ proposal to decriminalize marijuana at the federal level would by his own explanation leave states the option of continuing to ban it. The closest he comes to an explanation of how he’d bring the United States’ levels below that of China is by a seismic cultural shift at the state and local level to prioritize treatment for drug offenses and to disincentivize “implicit quotas” for low-level crimes. But that a lot’s different from having a plan to get there.

Update: The Sanders campaign sent along this response, emphasizing previously announced plans to form a commission to propose more concrete fixes after the inauguration:

Senator Sanders is committed to accomplishing the goal of the United Stares not having more people in jail than any other. During his first hundred days, he will appoint a commission of criminal justice experts, leaders in the African American, Hispanic, and Native American communities, and others who have had success on the local level in reducing the number of young adults going to jail and in transitioning people out of prison to other settings.

The Sanders Administration will rely on both legislative and executive actions to reorient the criminal justice system. What the campaign has done is lay out just some elements of what those actions would be. We envision this commission would propose even more.