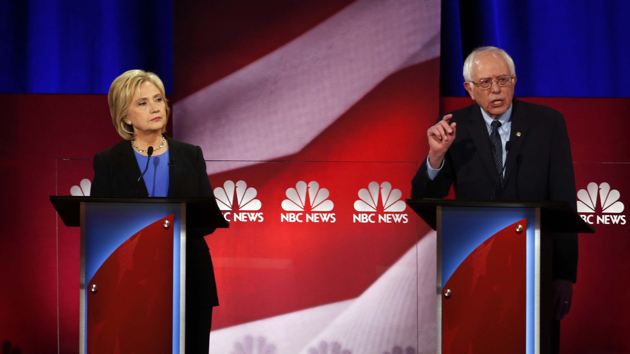 With Hillary Clinton and Bernie Sanders neck and neck in the polls, the Democratic candidates met, along with former Maryland Gov. Martin O’Malley, for the final debate before Iowa’s caucuses on February 1. Like the two prior debates, this one was held on a weekend night—likely diminishing the number of primary voters who tuned in.

Clinton and Sanders, who have traded attacks over the last several weeks on gun control, health care, and Wall Street reform, had a chance to spar in person. While the debate never turned nasty, it was certainly heated.

Right off the bat, the moderators asked Sanders about one of the most contentious issues of the Democratic primary: gun control. Sanders defended himself against Clinton’s attacks over his record on gun control. “I have a D-minus voting record from the NRA,” Sanders said in response to accusations that his votes align with the National Rifle Association. “It was in 1988, there were three candidates running for Congress in the state of Vermont, I stood up to the gun lobby and came out and maintained the position that in this country we should not be selling military style assault weapons.”

Clinton responded by repeating her campaign’s attacks against his gun record, saying that Sanders “has voted with the NRA, with the gun lobby numerous times. He voted against the Brady Bill five times. He voted for what we call, the Charleston Loophole. He voted for immunity from gun makers and sellers which the NRA said, ‘was the most important piece of gun legislation in 20 years.'”

After a week of exchanging fire over health care, Clinton and Sanders finally faced off over the issue in person. Sanders, who released a health care plan hours before Sunday night’s debate, called for a “Medicare-for-all” system while Clinton argued that Democrats should focus on improving the Affordable Care Act instead of embarking on another major debate over health care.

“That is nonsense,” Sanders said at one point, growing noticeably irked after Clinton suggested that his push for single-payer health insurance is the same as a rollback of Obamacare.

Sanders didn’t flinch when the moderators asked about the main difference between how he and Clinton would approach Wall Street. “The first difference is I don’t take money from big banks,” he said. “I don’t get personal speaking fees from Goldman Sachs.” From there, he dove into policy details, citing his enthusiasm for busting up the largest financial institutions and “21st century Glass-Steagall legislation” to separate commercial and investment banking.

Sanders returned to the topic later in the evening. “Secretary Clinton—and you’re not the only one, so I don’t mean to just point the finger at you, you’ve received over $600,000 in speaking fees from Goldman Sachs in one year,” he said.

Sanders calls for Justice Department investigations when anyone dies “in police custody.”

Sanders extended his criminal justice agenda Sunday evening with an ambitious new proposal, calling for the federal government to get involved whenever someone dies in police custody—an occurrence that has been highlighted by the recent deaths of Sandra Bland in Texas and Freddie Gray in Baltimore. “Whenever anybody in this country is killed while in police custody, it should automatically trigger a U.S. attorney general’s investigation,” Sanders said.

During her time as Secretary of State, Hillary Clinton famously spearheaded the Obama administration’s efforts to “reset” relations with Russia. But, since these overtures, Russian President Vladimir Putin has become increasingly bellicose and aggressive on the international stage. How would Clinton now describe her relationship with the Russian leader? “It’s, um, interesting,” Clinton said after a long pause, clearly choosing her words carefully.

Clinton calls attention to the crisis in Flint, Michigan.

In her closing remarks, Clinton raised the plight of the people of Flint, Michigan—where toxic levels of lead in the city’s drinking water has created a state of emergency—as an example of the kind of problem she wants to solve as president.

“Every single American should be outraged,” she declared. “We’ve had a city in the United States of America, which the population is poor in many ways and majority African American, has been bathing and drinking lead-contaminated water. And the governor of that state acted as if he didn’t really care.” Clinton speculated that if children in a rich suburb of Detroit were exposed to contaminated water, the reaction would have been different. Clinton went on to discuss how she dispatched one of her campaign operatives to Flint “to see what I could to help.”

Sanders, who spoke last, also addressed the crisis in Flint. “I demanded the resignation of the governor,” he said, calling Republican Gov. Rick Snyder a man who “should not stay in power.”