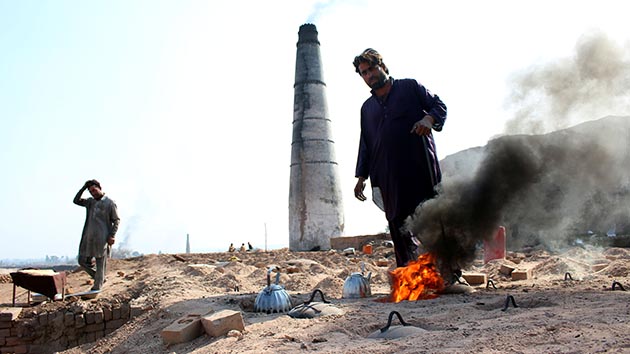 Afghan laborers works at a brick factory in the Surkh Rod district of Nangarhar province, Afghanistan, on January 27, 2016. A new report suggests economic and infrastructure development are incredibly difficult due to a worsening security situation in Afghanistan.Omid Khanzada/Imagespic/Sipa USA/AP

Things are going from bad to worse in Afghanistan, according to a new report filed by the US government’s top watchdog for Afghan reconstruction spending.

“In this reporting period, Afghanistan proved even more dangerous than it was a year ago,” writes John F. Sopko, the special inspector general for Afghanistan reconstruction (SIGAR), in a quarterly report released Friday morning. Sopko says recent “vicious and repeated attacks” in Kabul have shaken the confidence in the national government, and that American and British forces have had to step in several times to back up Afghan security and police forces, even though the local forces were given that primary responsibility a year ago.

“The lack of security has made it almost impossible for many U.S. and even some Afghan officials to get out and manage and inspect US-funded reconstruction projects,” he says. The inability to adequately inspect and manage reconstruction efforts has led to extreme waste, including one case where the Afghan government found that millions of dollars had disappeared as Afghanistan paid for “nonexistent ‘ghost’ schools, ‘ghost’ teachers, and ‘ghost’ students.”

These details and others are part of the congressionally mandated quarterly report, which reviews spending in Afghanistan from October 1, 2015, through December 31, 2015. (See the full report below.) Sopko and his team are tasked with accounting for the hundreds of billions of dollars in reconstruction projects organized by the United States since the 2001 invasion. He says their oversight has saved “over $2 billion” in taxpayer funds that otherwise would have been lost to fraud or inefficiency.

In this reporting period alone, Sopko says his office has issued 11 audits, inspections, and other reports. It secured a settlement agreement with two contractors accused in a bid-rigging scheme valued at $1.45 million, saved more than $100,000 in spending, and initiated fines, forfeitures, and restitution amounting to $110,000. These might be seen as small victories in a world where billions of dollars have been spent. SIGAR also points to its work that led to two US Army sergeants separately pleading guilty to conspiracy to receive and accept illegal bribes (one was sentenced to one year in jail, the other to two years). In another case, a US Army captain pled guilty to solicitation and receiving $50,000 for helping an Afghan trucking company earn contracts.

SIGAR also closed 14 investigations, most due to a lack of investigative merit or unfounded allegations. But it launched 17 new investigations for issues including procurement and contract fraud, corruption, theft, and money laundering, bringing the total number of ongoing investigations to 309, according to the report.

The report comes just days after the Washington Post reported that top US military commanders “are now quietly talking about an American commitment that could keep thousands of troops in the country for decades.” Citing current and former Pentagon officials, the Post paints a picture that reflects much of what SIGAR has been reporting for some time: The civic and physical infrastructure of Afghanistan is not close to being self-sufficient. “There is a broad recognition in the Pentagon that building an effective Afghan army and police force will take a generation’s commitment,” the Post reported, “including billions of dollars a year in outside funding and constant support from thousands of foreign advisers on the ground.”

Sopko noted several major audits that were released to the public during the last few months of 2015. One discovered and attempted to correct an ongoing problem of USAID medical facilities for which GPS location data was inaccurate, which caused problems with the inspections of some of those buildings. Another recent case involved 11 audits of a now-closed Pentagon business-development unit that spent millions of dollars on private living and security services. That same group, known as the Pentagon’s Task Force for Business and Stability Operations, airlifted Italian goats into Afghanistan as part of a failed $6 million project to boost the country’s cashmere industry. There was also the allegation of the $43 million compressed natural gas filling station that should have cost no more than $500,000. (the actual figured involved are likely lower.)

Congress also charged SIGAR with the task of assisting the Pentagon inspector general’s review of allegations of child sex abuse by Afghan security forces. That investigation was spurred by allegations, brought to light in September by the New York Times, that US soldiers were told to “look the other way” as their Afghan counterparts assaulted children brought to joint bases.

Neil Gordon, an investigator with the Project on Government Oversight who has followed the work of SIGAR for some time, hadn’t yet read SIGAR’s new report late Thursday, but he said the deteriorating security situation almost ensured that things over there would continue to deteriorate.

“SIGAR has been warning for several years that the decreasing U.S. troop presence would worsen the security situation and undercut oversight and management of reconstruction projects,” Gordon says. “So I would expect that waste and corruption in Afghanistan are getting steadily worse.”