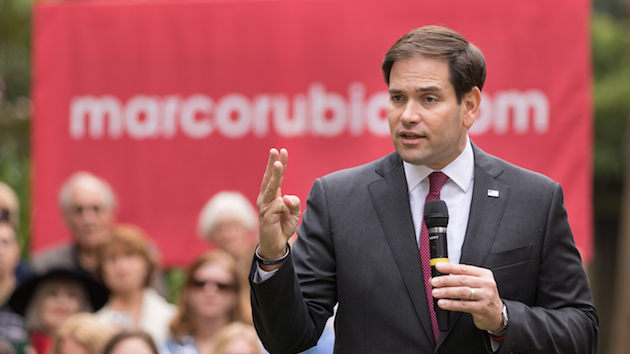 With days to go before Monday’s Iowa caucuses, Marco Rubio has suddenly and emphatically found his religion as he seeks to sway the evangelicals who are likely to dominate the contest. During the last pre-caucus debate on Thursday night in Des Moines, the senator from Florida regularly found a way to squeeze in talk of his faith, even when it had no apparent bearing on the question at hand.

“Well, let me be clear about one thing, there’s only one savior and it’s not me,” Rubio said when asked if he could be the savior of the GOP. “It’s Jesus Christ, who came down to Earth and died for our sins.”

Later, when asked to back up a few attacks against New Jersey Gov. Chris Christie in the previous debate, Rubio once again turned to religion. “You’ve just asked a very fundamental question about the role of faith in our country,” he said. “And I think this is an important question. I think if you do not understand that our Judeo-Christian values are one of the reasons why America is such a special country, you don’t understand our history.”

While he hasn’t gone into full pastor mode of citing Bible verses to defend his policies, religion has become a regular topic at Rubio’s town halls across Iowa. He repeated many similar points during a small town hall at Marshalltown Community College. Before a small mid-afternoon crowd, Rubio seemed to come alive whenever he had a chance to talk about his faith. Just two minutes into his speech, he began boasting of how Christianity made the United States special.

“We were founded on an incredibly powerful principle,” Rubio said, “the idea that every human being, your rights do not come from government, your rights come from God. It is our creator that has given us our rights.” When asked about taking care of the disabled during the Q&A portion of the event, Rubio again turned to the rights “from the creator” to draw a contrast with other countries. He reveled in a question about Planned Parenthood to tout his anti-abortion stance.

Rubio really perked up at a question about the Little Sisters of the Poor court case challenging the Affordable Care Act’s contraception coverage. “It’s part of a broader narrative and this all-out assault on religious liberty,” he said. He joked that religious liberty wasn’t just the right to believe anything you want, like worshipping trees. “Religious liberty is the right to live out your faith, personally,” he said. He noted that the government’s role isn’t to impose religion on others, though he was quick to reassure the voters in the room that he personally pursued that task. “I’m a Christian; you can’t impose Christianity,” he said. “Christianity is about the free gift of salvation, it has to be willfully accepted. You can’t force someone to convert to Christianity, won’t be legitimate. So I won’t force anyone to believe what I want. I’m more than happy to share my faith, and I always look for the opportunity to do that because my faith compels that, calls upon it.”

“Our goal is eternity, the ability to live alongside our creator for all time,” Rubio says in recent TV spot. “To accept the free gift of salvation offered to us by Jesus Christ.”

The event closed with another question that allowed Rubio to boast about how much he loves God and how important religion is to America. “It begins by recognizing,” he said,” whether you like it or not, that our Judeo-Christian values are an integral part of our history. It is, I believe, the reason why America’s the most generous nation in all mankind.”

Rubio’s ads have also recently taken on a religious bent. “Our goal is eternity, the ability to live alongside our creator for all time,” Rubio says in recent TV spot. “To accept the free gift of salvation offered to us by Jesus Christ.”

Why all the Jesus? It’s probably too late for Rubio to become the chosen candidate in Iowa, but with Sen. Ted Cruz of Texas relying on evangelicals to form a version of Rick Santorum’s 2012 coalition, Rubio may be looking to peel off a sliver of the die-hard Christians who dominate the Iowa caucuses so he can cut into Cruz’s main voting bloc and position himself as a candidate with broad appeal heading into the full primary season.