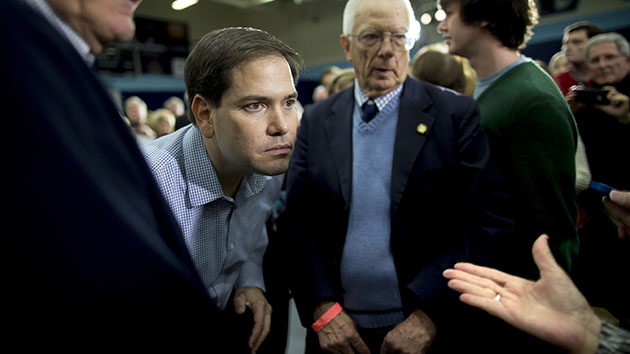 This week, Sen. Marco Rubio (R-Fla.) released a television ad that slammed President Barack Obama on several fronts: guns, abortion, climate change (it’s not a true threat), and the war on terrorism. In the ad, the almost-top-tier GOP presidential candidate proclaims, “America needs a real commander in chief and a president that will keep us safe.” And, as part of his indictment of Obama, Rubio huffs, “He spies on Israel.”

Rubio’s message seems to be that a strong and effective US leader would not spy on Israel, and that Rubio would not green-light espionage operations that keep an eye on that nation. No doubt, that would delight Israel and its spies, who have long targeted Washington with aggressive espionage operations.

As the Wall Street Journal reported last month, the US intelligence establishment does snoop on Israeli officials. This has outraged conservative supporters of Israel within the United States. But what has such spying unearthed? That Israel spies on the United States.

That’s not news. Jonathan Pollard, an American who worked for Navy intelligence, passed a ton of classified information to Israel, in what experts routinely describe as one of the most significant espionage cases in US history. He was caught in 1985, convicted, and sentenced to life in prison. In Israel, though, he was hailed a hero. And for years, Israel and some prominent Jewish Americans, including GOP billionaire Sheldon Adelson, pressed for Pollard’s release. (Two months ago, he was finally released on parole.) But Pollard was hardly the only Israeli spook who connived to swipe American secrets.

More recently, Jeff Stein, a veteran journalist on the intelligence beat, reported in Newsweek in 2014 that US intelligence officials discussed the issue at a top-secret congressional briefing, noting:

Israel’s espionage activities in America are unrivaled and unseemly…going far beyond activities by other close allies, such as Germany, France, the U.K. and Japan. A congressional staffer familiar with a briefing last January called the testimony “very sobering…alarming…even terrifying.” Another staffer called it “damaging.”

“No other country close to the United States continues to cross the line on espionage like the Israelis do,” a former congressional staffer told Stein. This source disclosed that US intelligence officials had cited “industrial espionage—folks coming over here on trade missions or with Israeli companies working in collaboration with American companies, [or] intelligence operatives being run directly by the government, which I assume meant out of the [Israeli] Embassy.” In a follow-up story, Stein noted, “Despite strident denials this week by Israeli officials, Israel has been caught carrying out aggressive espionage operations against American targets for decades, according to U.S. intelligence officials and congressional sources. And they still do it. They just don’t get arrested very often.”

In 2014 one of the documents obtained by Edward Snowden became public, revealing that the National Security Agency and the US intelligence community had long worried about Israeli spying on the United States. It read:

The Israelis are extraordinarily good SIGINT partners for us, but…they target us to learn our positions on Middle East problems. A NIE [National Intelligence Estimate] ranked them as the third most aggressive intelligence service against the U.S.

As the Wall Street Journal reported last March, Israel spied on the US-led talks with Iran regarding Tehran’s nuclear program:

The spying operation was part of a broader campaign by Israeli Prime Minister Benjamin Netanyahu’s government to penetrate the negotiations and then help build a case against the emerging terms of the deal, current and former U.S. officials said. In addition to eavesdropping, Israel acquired information from confidential U.S. briefings, informants and diplomatic contacts in Europe, the officials said…

“It is one thing for the U.S. and Israel to spy on each other. It is another thing for Israel to steal U.S. secrets and play them back to U.S. legislators to undermine U.S. diplomacy,” said a senior U.S. official briefed on the matter.

And how did the United States discover that Israel was spying on it and using the secrets it obtained to subvert official US policy? By spying on Israel:

The White House discovered the operation, in fact, when U.S. intelligence agencies spying on Israel intercepted communications among Israeli officials that carried details the U.S. believed could have come only from access to the confidential talks.

Following this revelation, Foreign Policy noted, “Jerusalem’s ongoing espionage campaign has worried U.S. officials so significantly that they have strenuously opposed an effort on Capitol Hill to include Israel in a regime of visa-free travel, which American spies fear will facilitate the travel of Israeli operatives into the United States.”

So back to Rubio. As a member of the Senate Intelligence Committee, he presumably is aware of the extensive Israeli intelligence operations against the US government and American businesses. Yet Rubio, a favorite of Likud-loving neocons (and reportedly Adelson), castigates Obama for spying on Israel and its spies. Would he really turn off all US espionage programs focused on Israel, which would give the Israelis a free hand to continue their intelligence operations against the United States? (Is this a plot line for the next season of Homeland?)

I sent the Rubio campaign an email with two questions:

* Does the senator believe that the US government should never mount any intelligence-gathering operations regarding Israel?

* Does the senator believe that the US should not spy on Israel to detect possible Israeli intelligence actions aimed at the United States government, such as the Pollard operation?

The Rubio campaign declined to respond. Without further clarification, Rubio is sending a clear signal: If elected president, he would be good news for the spies of Israel.