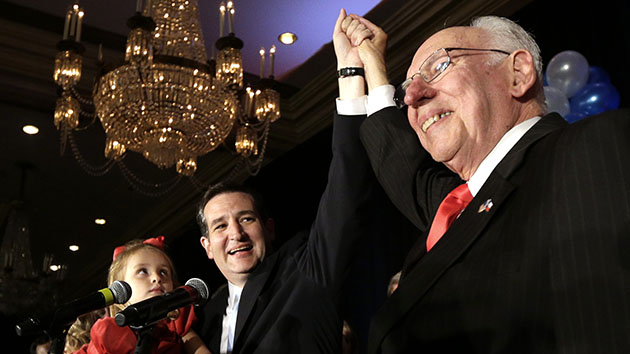 It’s no secret that Rafael Cruz, an evangelical pastor and the father of Sen. Ted Cruz, has a penchant for fiery fundamentalist rhetoric. He has declared the United States is a “Christian nation” and has called President Barack Obama an “outright Marxist” who “seeks to destroy all concept of God.” He has urged Americans to send Obama “back to Kenya” and has claimed the “wicked” are now ruling the United States. A popular speaker on the tea party and religious right circuits and a frequent campaign surrogate for his son, the elder Cruz has fiercely denounced gay rights and same-sex marriage and has decried religious leaders who don’t join the holy crusade against liberalism and secularism. Yet as his son has moved toward the top tier of Republican presidential candidates, Rafael Cruz hasn’t drawn a tremendous amount of attention in the media for his over-the-top statements. Perhaps that’s because his extremism is now old news among the politerati—and maybe that’s also because he has tried to be not too provocative. (He seems to have cut back on the birtherism stuff.) But he’s still at it. In a recent speech, Rafael proclaimed it was “appalling” that a homosexual had been elected mayor of Houston and that the devil had been behind last year’s Supreme Court decision that enshrined a right to same-sex marriage.

The elder Cruz has remained an important asset for his son. In recent months, he helped Ted, a GOP presidential contender, recruit religious leaders as supporters in Iowa, where the evangelical vote is highly influential. And this week, he released a new book, no doubt designed to bolster his son’s campaign, that contends that “Ted had a special calling on his life.” (In the book’s foreword, Glenn Beck asserts, “Ted Cruz will do anything to protect and preserve freedom.”) But a few months ago, Rafael Cruz took time off from the Ted Cruz campaign to help the effort in Houston to defeat Proposition 1, which would have banned discrimination based on sexual orientation and gender identity. In September, Rafael Cruz appeared at a luncheon for opponents of the proposition. (The video of his speech was posted by the No on Houston Prop 1 PAC.)

Cruz’s speech was full of his usual fire and brimstone. As he cited one biblical passage after another, he complained that too many Christian pastors do not engage in politics, and he slammed those clergy who do not preach “biblical truths.” He praised Kim Davis, the Kentucky county clerk who would not issue same-sex marriage licenses. Referring to the Supreme Court decision on gay marriage, he exclaimed, “The devil has overplayed his hand.” He suggested that the five justices who supported the ruling should be considered candidates for impeachment.

Cruz went on to signal that he’s not only against gay rights; he’s opposed to gays and lesbians holding public office. He noted that because “righteous” evangelical Americans are not voting in sufficient numbers, the nation faces a terrible situation: “the wicked electing the wicked.” He went on to declare, “It is appalling that in a city like Houston, right in the middle of the Bible Belt, we had a homosexual mayor.”

Cruz was referring to Annise Parker, an openly lesbian politician who was elected mayor of Houston in 2010 and served three two-year terms. (Term limits prevented her from running again.) She won her last election in 2014 with more than 57 percent of the vote.

In the past, when asked about his father’s controversial remarks, Ted Cruz has said Rafael does not speak for him. But throughout his political career, Ted Cruz has deployed his father to win over tea partiers and evangelical leaders and voters. Rafael has literally spoken for Ted at numerous events in Texas and elsewhere. And the son’s views on gay rights do not differ much from the father’s. Ted Cruz has denounced the Supreme Court decision, called for a constitutional amendment to prevent the federal government from recognizing same-sex marriage, and blasted politicians for marching in gay pride parades. In November, he appeared at an Iowa rally organized by a pastor who has often asserted that the Bible calls for stoning homosexuals to death.

So it’s pretty much like father, like son. But with less Bible-thumping. And it remains to be seen how long Rafael Cruz can go before causing any more campaign controversies for his son.