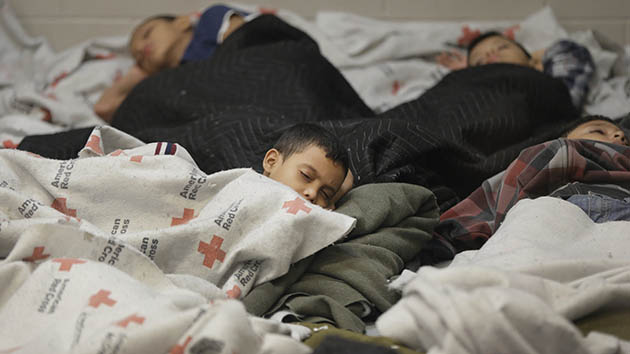 Detainees sleep in a holding cell at a US Customs and Border Protection processing facility in Brownsville, Texas, on June 18, 2014.Eric Gay/AP

The Supreme Court said Tuesday it would hear a case that could allow President Barack Obama to finally fulfill his sweeping and controversial executive orders on immigration. Announced by Obama in 2014, the orders would lift the threat of deportation from nearly 5 million undocumented residents. But a lawsuit filed by Texas and 25 other states challenging the constitutionality of Obama’s actions has left the orders—and millions of undocumented immigrants, mostly from Mexico and Central America—in legal limbo, with the clock ticking down to the end of Obama’s presidency.

The decision comes at a heated moment in immigration politics. Border patrols saw a sharp surge last year in the number of Central American children and families apprehended at the border, to which the Obama administration has responded this month with a series of deportation raids. Democratic lawmakers and immigrant rights advocates have denounced the raids. The influx of immigrants from Central America would not be affected by Obama’s executive orders, which explicitly target undocumented immigrants who have lived in the United States since childhood or have children born in the United States.

The Supreme Court’s decision marks the next stage in a struggle between the president and the Republican Party on immigration reform that has persisted throughout Obama’s two terms in office. After campaigning twice on promises of immigration reform, Obama in his second term tried and failed to move comprehensive immigration legislation through Congress. Finally, in November 2014, he announced the executive orders: one established a new program, known as Deferred Action for Parents of Americans and Lawful Permanent Residents (DAPA), to protect the parents of US citizens and permanent residents from deportation; another expanded eligibility for a program Obama created with an earlier executive order known as Deferred Action for Childhood Arrivals (DACA), which shields from deportation undocumented immigrants who arrived in the United States as children. These young people, known as DREAMers, were spared if they had served in the military, graduated from high school, or are currently in school.

Republicans in Congress immediately blasted the president’s actions as a high-handed overreach of executive power. Several current presidential candidates were among the orders’ most outspoken detractors: Sen. Ted Cruz (R-Texas) voiced his opposition by adapting a speech by the Roman orator Cicero warning of the downfall of the Roman state, while libertarian Sen. Rand Paul of Kentucky accused Obama of declaring a “constitutional war.”

But as Republicans in Congress engaged in rhetorical attacks, a real threat to the measures came from another corner. In December of that year, Texas and 16 other states filed suit against the US government, arguing that the president and administration had overstepped their constitutional authority. The group of plaintiffs later grew to 26 states.

In February 2015, the federal judge ruled that the states had standing to continue the lawsuit and temporarily blocked Obama’s orders. The federal government appealed the decision, but the injunction was upheld by the 5th Circuit Court of Appeals this past November. Within weeks, the Obama administration petitioned the Supreme Court to hear the case, arguing that the injunction “will force millions of people…to continue to work off the books, without the option of lawful employment to provide for their families.”

Now, with the Supreme Court’s decision, the Obama administration will have one last chance to make its case.