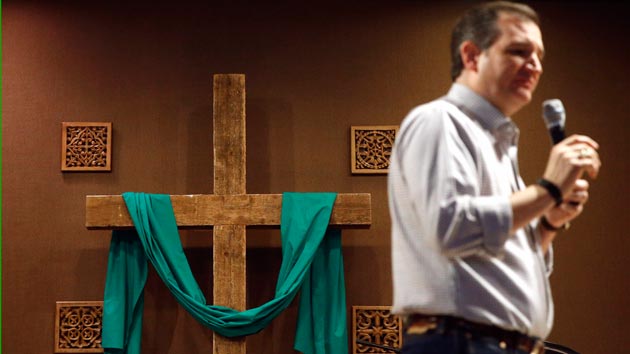 Ted Cruz spent most of Saturday winding his way through the low rolling hills and and snow-covered cornfields of northwest Iowa in a bid to win over evangelical voters in the state, an influential voting block that has helped conservative Christian candidates win the Iowa caucuses—Mike Huckabee in 2008 and Rick Santorum in 2012. This is the corner of the state that sends arch-conservative Rep. Steve King to Congress.

Cruz, who trails Donald Trump in the latest Des Moines Register poll released Saturday night, 23 percent to 28 percent, is courting social conservatives with what could be described as religious fervor. To beat Trump on Monday, polls show, Cruz has to turn out the evangelical vote and even woo supporters still loyal to neurosurgeon Ben Carson, Marco Rubio, and past winners Huckabee and Santorum. The Register poll showed 47 percent of likely Republican caucus-goers were evangelicals—but Cruz can essentially come up even with Trump if he brings that number up to 60 percent. And it shouldn’t be impossible; in 2012, social conservatives made up 57 percent of caucus-goers.

So demonstrating the primacy of his religious faith and the support of prominent conservative Christians is a priority for Cruz. At stops along the road this week, Cruz is often introduced by Bob Vander Plaats, one of Iowa’s most influential evangelical leaders. During his introduction, Vander Plaats’ likes to recall a meeting with a member of Benjamin Netanyahu’s government in Israel who, upon hearing that Vander Plaats is from Iowa, instructed him to “choose well.” Vander Plaats then launches into a biblical description of what it means to “choose well.” And his choice, of course, is Cruz.

But Vander Plaats is just one of the evangelicals who are playing up Cruz’s faith in a bid to win over Iowa’s social conservatives. And for many, it appears to be working. Saturday night in Sioux City, hundreds of supporters appeared at a Cruz rally that featured a rock-star line up of evangelical and tea party leaders, including Vander Plaats, Duck Dynasty patriarch Phil Robertson, and TV personality Glenn Beck.

“I think the Lord spoke tonight and told me to vote for Ted Cruz,” said John McCreedie, a pastor in Council Bluffs, as he left the Sioux City rally Saturday night—one of several people who said that he had made up his mind that night to support the Texas senator.

Even when Cruz didn’t seal the deal, he did impress. “Awesome! Inspiring!” said a man in a leather jacket after the rally. The man asked not to be named because he had already committed to speak on behalf of Carson at his precinct caucus on Monday night. “I’m gonna stay with Ben,” he said, adding that he was also now a fan of Cruz. “At church last Sunday we felt a calling to caucus for Ben,” his wife explained. If it weren’t for that, they would be supporting Cruz. But she, too, was moved by Cruz. “I had tears,” she said. “I love him.”

In the tiny town of Hamlin, Iowa, Donna Sheeder, 27, was one of perhaps 100 people who packed like sardines into the town’s restaurant, Darrell’s, to hear Cruz speak on Saturday afternoon. “I’m just here to check it out,” she said. After Cruz spoke, Sheeder was a convert. Every Wednesday morning, she said, her prayer group prays for a leader for the United States. She believed she had found him.

But Traci Clarke, 51, standing beside Sheeder, was unconvinced. She liked his religious message, she said, but thought he had “laid it on too thick.”