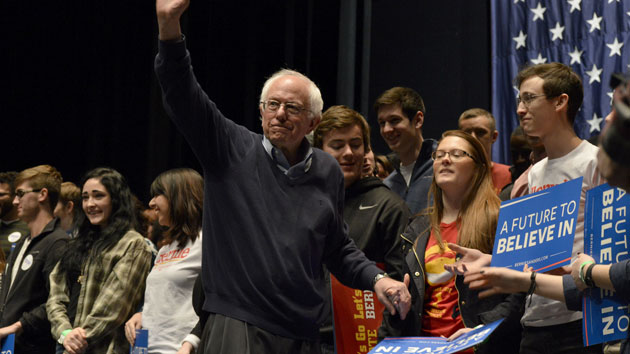 Bernie Sanders was defensive when he was asked at Thursday’s Democratic presidential debate why he doesn’t talk more about how he’d approach being commander-in-chief. So does he plan on changing course anytime soon? Not a chance.

On Sunday afternoon in Portsmouth, New Hampshire, speaking at the same community college that hosted Hillary Clinton on Saturday, Sanders did not mention foreign policy until the 50th minute of a 54-minute speech. Even then, he kept it short, telling supporters (and a few undecided voters) he was tired of being “lectured” by his opponent on the issue. “And by the way,” he said, as he wrapped up his remarks, “as somebody who voted against the war in Iraq—who led the opposition to the war in Iraq, lately I have been lectured on foreign policy. The most important foreign policy in the modern history of this country was the war in Iraq. I was right on that issue. Hillary Clinton was wrong on that issue.”

And then he moved on. In one of his final get-out-the-vote events before Tuesday’s New Hampshire primary, Sanders showed a willingness to continue taking the fight to Clinton on his own terms. The speech he gave on Sunday, his voice still hoarse from his appearance on Saturday Night Live with Larry David, was much the same speech he delivered in Boston in October, and in Burlington in May. He excoriated the oligarchs who he believes corrupt the political system and outlined a theory of change, from the suffrage movement to civil rights to gay rights, that he believes shows that grassroots movements like his own can overturn the system. The routine is so familiar that when he asked his audience who the biggest recipient of federal welfare is, about half of those in attendance were able to answer—”Walmart.”

What’s changed is the crowd. When I saw him in Boston in October, the crowd booed 17 different times during his speech, prompted by references to Jeb Bush or the Koch brothers. On Sunday, that number was halved in a speech of equal length. (Targets of booing included the black and Latino unemployment rate, speaker fees from Goldman Sachs, and companies that exploit loopholes in the tax code to avoid “paying a nickel in federal income taxes.”) Clinton refers to the animating ethos of Sanders’ supporters as “anger,” and there’s certainly that, but increasingly, there’s the optimism of an organization that truly thinks it can win.

That’s typified by one of the few tweaks he’s made to his speech over the last few months: He now talks about the poll numbers. “We started this campaign at 3 percent in the polls,” he told the crowd early on. “We were 30, 40 points down in New Hampshire. Well, a lot has changed.” Except for all the stuff that hasn’t.