The Council on American-Islamic Relations and the American Civil Liberties Union filed a federal lawsuit today against a “Muslim-free” gun range in Oklahoma. The suit alleges that the owners of the Save Yourself Survival and Tactical Gun Range in Oktaha are violating state and federal laws by hanging a sign declaring their range as a “Muslim-free establishment” and denying entrance to a Muslim-American man. (An employee confirmed that the sign is still up today.) 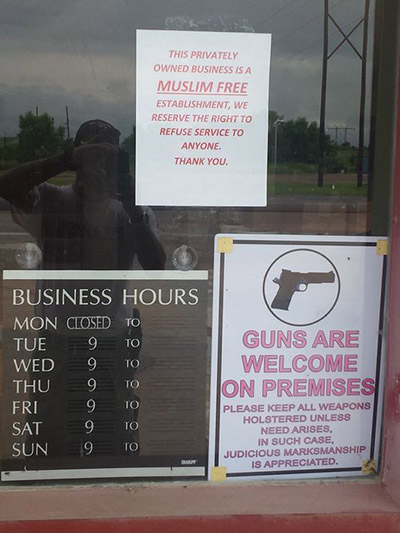 A sign in the window of Save Yourself Survival and Tactical Gun Range in Oktaha, Oklahoma Council on American-Islamic Relations

“Religious segregation no more belongs in today’s America than racial segregation,” wrote Brady Henderson, the legal director of the ACLU of Oklahoma, in a press release. “Whether a sign reads ‘No Muslims’ or ‘No Coloreds,’ it is just as un-American, and just as wrong.” The CAIR and ACLU say that the gun range is in violation of Oklahoma’s non-discrimination law and the Civil Rights Act of 1964, which forbids certain businesses from denying service to customers based on their race, color, religion, or national origin.

The suit was filed on behalf of Raja’ee Fatihah, an Army Reserve member and a native of Tulsa, who shoots for sport and to maintain his marksmanship. Fatihah says that when he first visited the Oklahoma shooting range in October, he was refused service. The official complaint alleges that after Fatihah identified himself as a Muslim, the range’s owners armed themselves by picking up handguns and refused to allow him access to the gun range. The complaint states that the owners asked Fatihah if he was there to commit an act of violence of as part of a “jihad,” and accused him of planning to murder them in accordance with “Sharia law.” Fatihah had never shot there before and was there to apply for membership.

“There is no justification for a business denying people service based on religion,” Fatihah said in a statement issued by the ACLU. “I should be afforded the same rights and privileges as anyone else.”

Last September, CAIR, along with 81 other advocacy groups, called on the Department of Justice to investigate the spread of “Muslim-free” businesses, which have cropped up in Arkansas, Florida, Kentucky, New Hampshire, New York, and Oklahoma. CAIR attempted to bring a similar suit against a gun range owner in Florida last year. However, that case was thrown out because it never identified a plaintiff. The defense attorney in that case, Robert Muise of the conservative American Freedom Law Center, is now working on behalf of the owners of Save Yourself Survival and Tactical Gun Range.

The defendants say that they refused service to Fatihah because he was acting belligerently, a claim that CAIR disputes. “Having a sign in and of itself is not a violation of anything,” Muise told a Tulsa news station. “In fact, I would argue that you have a First Amendment right to say what you want.”

Veronica Laizure, the civil rights director of CAIR’s Oklahoma branch, says that if the suit prevails, it would be the first time a federal court has sanctioned a business for banning Muslims. “We hope that this will galvanize more people to file these types of lawsuits,” she says. “We also hope that through sharing Raja’ee’s story, people will come to better understand their Muslim neighbors, colleagues, and friends, and will learn that they have nothing to fear.”