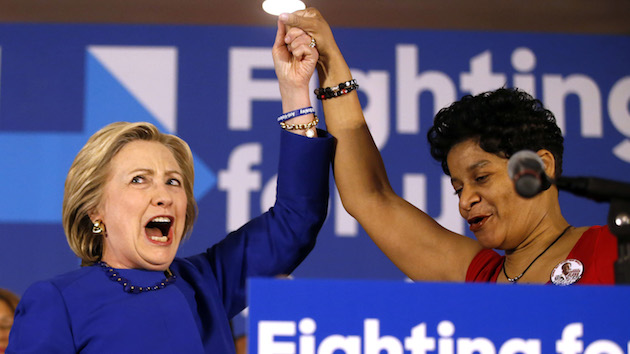 As Hillary Clinton makes her final push in South Carolina ahead of the state’s critical Saturday primary, she’s getting some help from five African American mothers whose children were victims of gun violence or died in police custody.

The women—Maria Hamilton, the mother of Dontre Hamilton; Lucia McBath, the mother of Jordan Davis; Geneva Reed-Veal, the mother of Sandra Bland; Sybrina Fulton, the mother of Trayvon Martin; and Gwen Carr, the mother of Eric Garner—spoke to small audiences at three black churches in the first round of a two-day trip that will culminate Tuesday night in a megarally with Clinton in Columbia. They talked emotionally about their faith and their families’ trauma, but they were there primarily to deliver a simple message about the Democratic presidential front-runner: You can trust Hillary Clinton.

In Nevada, as in New Hampshire and Iowa before it, Democrats who said “trustworthiness” was an important factor in their vote chose Sanders in overwhelming numbers. Talk to an undecided voter at a rally and there’s a better-than-even chance it comes up. “I think there’s an underlying question that maybe is really in the back of people’s minds, and that is, ‘Is she in it for us or is she in it for herself?'” Clinton conceded to CNN’s Jake Tapper on Sunday.

The five mothers were there to ease those concerns, while talking up the former secretary of state’s plans for gun control and criminal justice reform.

“We haven’t been prompted or prodded to say this,” Reed-Veal, whose daughter died in a Texas jail after being pulled over for not signaling a turn, told the 30 or so voters crammed into a side room of Lonely Hill Baptist Church in Holly Hill. “These are all things that each of us felt—a genuineness. She listened and followed through for us. You can’t fake that.”

They all described an intensive courtship by the Clinton campaign that began quietly, through back channels and outside the glare of the national media. Hamilton got her first meeting with Clinton after she promised on Facebook to shut down a Clinton rally with a protest in Milwaukee last spring. When the two met, they hugged for three minutes, and Hamilton cried on Clinton’s shoulder. Reed-Veal met Clinton at a Congressional Black Caucus dinner. “She walked up, held my hand, and she said, ‘What is it that you want?'” Reed-Veal recalled. She got a personal letter from Clinton afterward. Then she got a second letter, inviting her to a Democratic debate. After a Texas grand jury decided not to indict anyone for her daughter’s death, she got a third letter from Clinton.

Clinton sealed the deal, they explained, when she met with the five of them last fall in a conference room in Chicago. It was a low-key affair. The candidates’ staffers shooed reporters from the room before it began, and Clinton showed up with a notepad to jot down what she heard. They were told they had 30 minutes; the meeting lasted for two hours. “She knew which cases went to jail,” Fulton said, when she told the story at the second stop of the day, a church in Sumter. “She knew specifically what happened in our tragedies. She knew that information and she knew because she cares. She cares. Not only does she care about victims of gun violence but she cares about women, she cares about African Americans. She cares!”

“We sat there and collaborated with her and her staffers,” Reed-Veal recalled, sounding a little awed. “Our concerns are implemented in her policy. God is good! He was in the room. The Lord was was in the room! And Hillary was that mother, that grandmother, that sister.”

That such an event happened at all is a testament to how far the Democratic landscape has shifted not just from 2008—when the Clintons cast doubts on the electability of Hillary Clinton’s African American opponent ahead of the South Carolina primary and boasted of the then-New York senator’s unique strength with white voters—but from the launch of the campaigns last spring. Neither Clinton nor Sanders talked about police violence, incarceration, or gun control in their announcement speeches last spring. It simply wasn’t something Democratic presidential candidates felt they needed to talk about. But as they hit the home stretch in South Carolina, it has become a cornerstone of their platforms.

Sanders’ radio ads in the state, like Clinton’s, emphasize his position on incarceration and systemic racism. The head of Columbia’s Black Lives Matter organization is a member of Sanders’ state leadership team, and the Vermont senator campaigned in Greenville on Sunday night with Ben Jealous, the former president of the NAACP. Most notably for the purposes of Clinton’s surrogates, Eric Garner’s daughter Erica narrated a campaign ad for Sanders.

“I haven’t tried to persuade her because you know how young people are—sometimes they get fed something and they believe it,” Carr told the audience when she was asked about her granddaughter, eliciting a few laughs. “I’d say, ‘Do your research.’ That’s all I can say: Do your research. I don’t want her to think I’m the bad person because I want to try to persuade you to come my way, or, ‘Oh, my grandmother don’t know, she’s from old school.’ Do your research and then make your decision; don’t make your decision because your friends or your peers are doing this.”

Although Clinton does not make her faith a major part of her campaign, Monday’s forums had a distinctly religious flair. The five mothers prayed together in the parking lot before speaking in Holly Hill, and when it was over, they joined hands in prayer again. There were no campaign signs at either of the first two forums; instead, the women spoke against the backdrop of a painting of the Last Supper. Reed-Veal invoked the biblical trials of Job—who lost 10 children in one day—and expressed her hope that their movement might just save an atheist or two. McBath said she’d had a spiritual awakening after the death of her son. “My child has been a martyr for this cause so that we can turn our faces back to God,” she said, “because we’ve turned away from God, and that is the reason why we’re seeing what’s happening in this country.”

The most emotional responses on Monday came not from the mothers, who have relived their stories over and over again for months and months, but from members of the audience. When it came time for questions in Sumter, the only white man in the room stood up and began to choke up. One of the mothers handed him a tissue. “This is what you all have done—you’ve moved people,” he said. “We thank you and we love you, and welcome to our community. Thank you for the hope that you bring. And I hope that we can do whatever we can do to make it right.”

“Vote for Hillary, man!” one of the mothers said.

He stood up, hugged Fulton and Carr, and walked out.