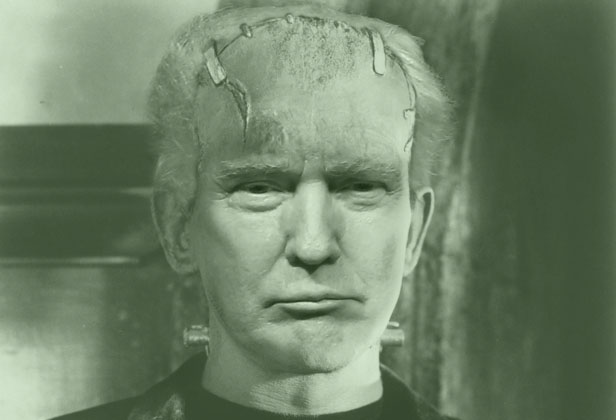 After Donald Trump’s third win in a row, pundits and political observers are beginning to accept a stark reality: This guy may become the Republican Party standard bearer in the 2016 presidential election. (The morning after the bigoted, bullying tycoon triumphed in the Nevada caucuses, the Drudge Report splashed a headline simply declaring, “The Nominee,” below a photo of Trump.) And tweeters, scribes, and analysts throughout the political-media world began wondering if the GOP elite could do anything to stop him from seizing control of the Republican Party. Whether possible or not to de-Trumpify the GOP at this point, Republican insiders, pooh-bahs, and bigwigs only have themselves to blame for Frankentrump. In recent years, they have fomented, fostered, accepted, and exploited the climate of hate in which Trump’s candidacy has taken root. For the fat-cat donors, special-interest lobbyists, and elected officials who usually run the Republican show, Trump is an invasive species. But he has grown large and strong in the manure they have spread across the political landscape.

A short history of GOP-approved hate could begin with the 2008 campaign. After Sen. John McCain selected little-known Alaska Gov. Sarah Palin as his running mate, there was an explosion of right-wing loathing. Palin led this angry crusade of animosity. She accused then-Sen. Barack Obama, the Democratic presidential nominee, of “palling around with terrorists” and pushing socialism. She suggested that only certain areas of the United States were “pro-America.” (She had to apologize for that.) It was all part of a mean-spirited attempt to delegitimize Obama and his supporters. At McCain-Palin rallies, the atmosphere was ugly. Supporters of the Republican ticket wore T-shirts and carried signs branding Obama a communist. Some shouted “kill him” or “off with his head.” Little of this was discouraged. At a town hall meeting in Minnesota, one woman told McCain that Obama was an “Arab.” When McCain, to his credit, replied that this was not so, others in the audience shouted “terrorist” and “liar,” referring to Obama. McCain noted that he respected Obama and admired his accomplishments, and the crowd booed him. The hatred that Palin had helped to unleash was too much for McCain to tamp down.

And it only intensified once Obama took office. Of course, much of this was fueled by the conservative provocateurs and windbags, led by Rush Limbaugh and the like. But elected Republican officials and leading GOPers, who had adopted a political strategy of never-ending obstructionism to thwart Obama, often enabled the hate. While delivering a speech to a joint session of Congress in 2009, Obama was heckled by Rep. Joe Wilson, a South Carolina Republican who shouted, “You lie.” Wilson apologized, but following his outburst, he received a surge of campaign contributions and went on to win handily his next election. Meanwhile, a dozen or so GOP members of Congress were pushing birtherism—the notion that Obama had been born in Kenya, not Hawaii, and was some sort of usurper of the presidency. This conspiracy theory seemed tinged with racism, despite the denials of birthers, and ran parallel to other right-wing claims that Obama was a secret Muslim or a secret socialist or both. The big point was obvious: He wasn’t a real American, he had achieved power through furtive means, he had a clandestine agenda, and Obama hatred was fully warranted.

Top Republicans played footsie with all this. In the fall of 2009, then-Rep. Michele Bachmann called for a Capitol Hill rally to protest Obamacare. Several thousand people showed up. Protesters questioned Obama’s citizenship, depicted him as Sambo, or called him a traitor. Referring to Obamacare, the crowd shouted, “Nazis! Nazis!” The atmosphere was full of animus. And here’s the thing: The entire House Republican leadership, led by Rep. John Boehner, was there. Boehner did not admonish the crowd for its excessive rhetoric. In fact, he joined in, declaring Obamacare the “greatest threat to freedom I have seen.” Clearly, he and his lieutenants believed the hate-driven energy of these activists and voters could fuel the Republicans’ bid to take control of the House. So the more red meat, the merrier. Republicans fed the paranoia, claiming Obamacare would bring about “death panels” and ruin the country (as would Obama’s stimulus bill, his climate change bill, his budget, and almost every other initiative he advanced). In March 2010, after another Capitol Hill rally headlined by Bachmann, tea partiers reportedly hurled racial epithets at members of the Congressional Black Caucus and shouted anti-gay chants at then-Rep. Barney Frank. Rep. Emanuel Cleaver (D-Mo.) said one of the protesters had spit at him.

The Republican effort to portray Obama as the other never waned. In 2010, Newt Gingrich, the former speaker of the House and a future presidential candidate, told two reporters that Obama was “outside our comprehension” and “that only if you understand Kenyan, anti-colonial behavior, can you begin to piece together [his actions].” He claimed Obama had played “a wonderful con” to be elected president, was “authentically dishonest,” and had a worldview that was “factually insane.” This was a heavy indictment, but one that echoed what conservative writers, bloggers, and talkers were saying. Though out of office, Gingrich remained a party leader, and his remarks were an indicator of the state of play on the right and within the party.

After the House Republicans’ bet on the tea party paid off and they gained control of the House in the 2010 midterm elections, the party’s dance with hate did not stop. In 2011, as the GOP’s 2012 presidential candidates jockeyed for position, they pandered to those voters who considered Obama a dangerous phony. While pondering a second presidential run, former Arkansas Gov. Mike Huckabee claimed Obama’s perspective was skewed because he had grown up in Kenya and had been subjected to plenty of anti-imperialist talk. Former Massachusetts Gov. Mitt Romney did not go full birther. But he pitched a related line, declaring, “The Obama Administration fundamentally does not believe in the American Experiment.” In other words, Obama was not truly American. A top Romney campaign adviser, John Sununu, put it more bluntly, noting he wished the president “would learn how to be an American.” Romney also claimed (falsely) that Obama had gone on a global “apology tour”—another dig designed to suggest Obama was essentially a foreigner.

Though Romney did not contend Obama was a covert Kenyan, he warmly accepted the endorsement of the nation’s most prominent birther: Donald Trump. Appearing with Trump at his Las Vegas hotel before Nevada’s GOP caucus in February 2012, Romney praised the real estate magnate and noted it was awesome to be backed by Trump: “There are some things that you just can’t imagine happening in your life.” By this point, Trump had sent investigators to Hawaii—or said he had—to investigate Obama’s birth, and he had even suggested Obama might be a Muslim. With this meeting, Romney signaled that Trump was fine company for the GOP. Trump’s over-the-top birtherism was not a disqualification. The Republican tent had room for this reality-denying reality television celebrity. (Romney, his former strategist Stuart Stevens tells me, did say no to Trump’s requests to campaign with Romney and to speak at the GOP convention.)

After Obama’s reelection, the hate machine churned on. Republicans continued to whip the false meme that Obama was bent on taking all guns away from Americans. They routinely claimed not that his policies were wrong but that he was feckless and weak—or dictatorial and authoritarian. Last year, Rudy Giuliani said, “I do not believe the president loves America.” And Dick Cheney claimed Obama operates as if he wants to “take America down.” (That’s a theme Sen. Marco Rubio has, uh, repeatedly, pushed on the campaign trail, contending that the president is deliberately weakening the United States.) Texas Gov. Greg Abbott and Sen. Ted Cruz, another presidential wannabe, gave credence to the wacky notion that Obama was going to invade and seize control of Texas.

It’s been a long run of Republicans accepting, encouraging, and exploiting uncivil discourse, anti-Obama hatred, and right-wing anger. (Republicans also welcomed nearly $300,000 in campaign contributions from Trump since he went birther.) The GOP raised the expectations of its Obama-detesting base and primed the pump for Trump. There is not much wonder that a xenophobic and misogynistic bigot and bully who bashes immigrants and calls for a Muslim ban—and who also slams the Republican insiders for rigging the system—should now find a receptive audience within the GOP’s electorate. For years, Republicans gave their voters a taste for the reddest of meat. That increased the appetite for more. And here comes Trump the butcher with a heaping plate.

Oh, the clichés abound. You play with fire. The chickens come home to roost. Hoisted on your own petard. You reap what you sow. The call is coming from inside the house. The GOP elite laid the foundation on which Trump is building the biggest, classiest—really classy—most beautiful insurgent presidential campaign in all of US history. And there may be no emergency exit.