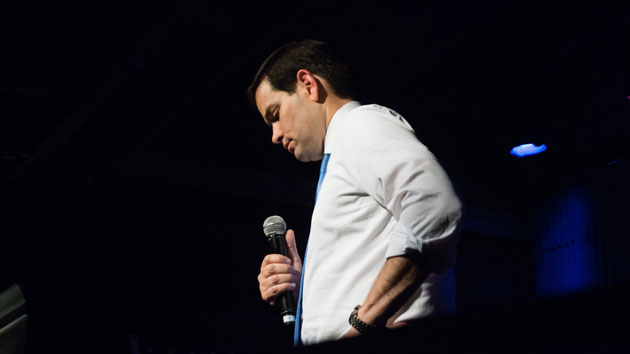 Marco Rubio trails by Donald Trump by 20 points ahead of Saturday’s South Carolina Republican primary, a contest that has all but once in its history chosen the party’s eventual nominee. But as Rubio began his final pitch to conservative voters Wednesday morning at a Shriners’ Hall in Mt. Pleasant, there was one subject he wouldn’t talk about: Trump.

In recent days, his Republican rivals—mainly Ted Cruz and Jeb Bush—have tried to position themselves as the Trump slayer. And Rubio’s own campaign manager has publicly contemplated the prospect of a Trump-dominated contest leading to a brokered convention. But for now Rubio himself is not directly addressing the guy who’s poised to blow him and the other GOP contenders out of the water in the Palmetto State. Instead of decrying Trump’s impact on the Republican Party, he’s been expressing concern about the hostile takeover of the other major party. “The Democratic party’s been taken over by radical left-wing elements—their leading contender leading in some of the national polls is an avowed Democratic Socialist,” he told the a few hundred voters at Shriners’ Hall. “I promise you that if someone that far right as he is far left had taken over the Republican party, every day you’d be hearing stories the Republican party has become radicalized—the Democratic party’s been radicalized!”

Rubio, though, could not resist a tangential dig at the real estate mogul. He raised the subject of eminent domain, and said, “Theoretically, I’m not saying this happens, but theoretically for a moment, imagine that a developer decided they wanted to take private property away to build a hotel or something like that—just theoretically.” The largely-supportive audience laughed, and Rubio continued: “After the Kelo decision in 2006, the Supreme Court said that’s legal—a developer can use the power of government to take away your property because government thinks they’d rather have a hotel there instead of a house. You can’t do that in Florida because when I was in the state legislature I led the effort to pass a law that would become a model for the country.”

That was a dig at Trump, who has been attacked by his GOP foes for having used eminent domain for his own private projects. But it did seem that Rubio had decided not to mention the T-word—as if speaking the name might disturb the exiled Dark Lord and his Death Eaters.

Rubio did not take questions at the event, which was advertised as a town hall. But speaking to reporters afterwards, the Florida senator ripped into Texas Sen. Ted Cruz, accusing his legislative colleague of being a politician who “will say and do anything to get elected.” Rubio also brought up the massive ad campaign by a pro-Jeb Bush super-PAC to take him down (by, among other things, making fun of his boots). But no explicit slam on Trump. On this matter, the most hawkish guy in the race is a real dove.