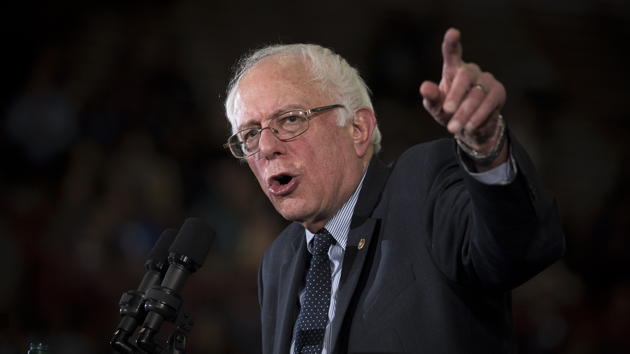 The comment came as Hillary Clinton tries to persuade Democratic voters of Sanders’ past divergences from the party. In recent weeks, Clinton has repeatedly painted her opponent as anti-Obama, pointing to statements he made before the president’s reelection campaign that suggested Obama needed to get a primary challenge from the left, perhaps from the Vermont socialist himself—a charge Sanders has generally dismissed as irrelevant and overblown.

Sanders tried once again to duck away from his suggestion in 2011 that Obama needed a primary challenge from the left. Early in Thursday’s town hall hosted by MSNBC and Telemundo, moderator Chuck Todd pushed Sanders to explain those past statements, airing a clip of Sanders saying, “I think it would do this country a good deal of service if people started thinking about candidates out there to begin contrasting what is a progressive agenda as opposed to what Obama is doing.”

Sanders tried to swat it away as just a simple, unplanned response to a radio interviewer in 2011. “Look, this is a media issue,” Sanders said. “This is one thing I said on one radio show many, many years ago. Media likes that issue. Bottom line is I happen to think that the president has done an extraordinarily good job.”

So how real was Sanders’ threat? Real enough that it prompted the Obama campaign to consider it seriously, according to David Plouffe, Obama’s campaign manager in 2008 and a White House senior adviser when Sanders made his comment. “He did suggest that we get primaried, which is no small thing—like a big thing,” Plouffe told Mother Jones Thursday afternoon at a Clinton field office in Las Vegas. “We thought maybe he’d run against us.” When asked if that meant the Obama campaign made plans for that scenario, Plouffe said, “We prepared for everything. That’s a problem. He’s suggesting that progressives have been let down by Obama, that’s a problem. I think there’s no question that she’s been a more steadfast supporter.”

Plouffe had swung by the field office to rally Clinton volunteers, who were busy phone banking for Clinton ahead of Saturday’s caucuses. After Plouffe addressed the room, I asked him if it felt weird coming back to Nevada to stump for Clinton, eight years after he ran a campaign against her. “Of course it feels a little odd, given how intense that primary was,” he said.

But the former Clinton foe is now firmly on her side. He acknowledged that Sanders has run an impressive campaign, but he was generally dismissive of Sanders as a serious candidate. “Aspirational campaign not rooted in reality,” he said to sum up Sanders’ approach. Of Sanders’ planned political revolution, he added, “None of that stuff is going to happen. I hate to be a realist, but it wouldn’t get support by most Democrats in Congress, let alone Republicans. And I don’t think it’s the right thing to do. Taxing the middle class right now when they’re struggling with wage stagnation and income insecurity is the wrong way to go.”

“Right now, he’s running a very aspirational campaign, not terribly rooted in reality,” Plouffe continued. “There’s a place for that, and it’s getting a lot of appeal.”